Americans Are Losing Their Freedom 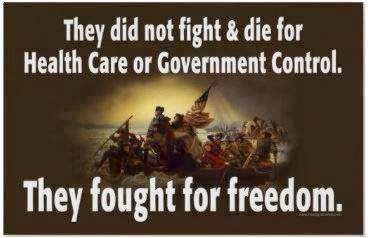 
February 1st was National Freedom Day. It commemorates Lincoln’s signing of the House and Senate resolution that later became the 13th Amendment. Lincoln signed the Amendment outlawing slavery on February 1, 1865.


Short of another Civil War, Americans have reached a point verging on the loss of their Constitutional freedoms as ever before. The issue then was slavery, but Americans are rapidly moving toward having their Bill of Rights annulled by a President intent on ruling as a despot, making them slaves of a regime that rules as he wishes, ignoring the Constitution and Congress.


His actions have been supported by the Democratic members of Congress and because Republicans only control the House they have seen their legislative efforts to oppose the regime blocked, often by one man, Harry Reid, the Senate Majority Leader. The nation’s media with few exceptions have supported or ignored the President’s actions.
Why is this happening? A brief review of the means put forth in Saul Alinski’s “Rules for Radicals”, written by a “community organizer”, outlines what Obama is doing as he seeks to turn America into a socialist state. It is a process that progressives/liberals have been pursuing since early in the last century.
1) Healthcare – Control healthcare and you control the people.

2) Poverty – Increase the poverty level as high as possible, poor people are easier to control and will not fight back if you are providing everything for them to live.

3) Debt – Increase the debt to an unsustainable level. That way you are able to increase taxes, and this will produce more poverty.

4) Gun Control – Remove the ability to defend themselves from the Government. That way you are able to create a police state.

5) Welfare – Take control of every aspect of their lives (Food, Housing, and Income).

7) Religion – Remove the belief in God from the Government and schools.

8) Class Warfare – Divide the people into the wealthy and the poor. This will cause more discontent and it will be easier to take (tax) the wealthy with the support of the poor.


We are close to having everything we write and say known to the regime. As Andrew Napolitano asks, “What if the government spies on all of us all the time and recognizes no limits to its spying? What if its appetite for acquiring personal knowledge about all Americans is insatiable? What if the government uses the microchips in our cellphones to follow us and listen to us as we move about?”


And what if Congress, as World Net Daily’s Bob Unruh has written, has empowered the President to “arrest, kidnap, detain without trial and hold indefinitely American citizens thought to ‘represent an enduring security threat to the United States.’” That’s what the National Defense Authorization Act (NDAA) does!


“Some of the nation’s most respected legal teams are asking the Supreme Court to take up a challenge to the indefinite-detention provisions” of the Act “charging that the law has created the framework for a police state.” That’s how far along we are toward the destruction of the U.S. Constitution.


“The 2014 NDAA was fast-tracked through the U.S. Senate, with no time for discussion or amendments, while most Americans were distracted by the scandal surrounding A&E’s troubles with ‘Duck Dynasty’ star Phil Robertson. Eighty-five of 100 senators voted in favor of the new version of the NDAA, which had already been quietly passed by the House of Representatives.”
Ostensibly a law to address terrorists, the NDAA is a blueprint for a nation in which its citizens have none of the rights spelled out in the Bill of Rights. All it will take is the declaration of martial law or a national emergency.


Sen. Ted Cruz, a leading opponent of Obamacare, writing in The Wall Street Journal, said, “Of all the troubling aspects of the Obama presidency, none is more dangerous than the President’s persistent pattern of lawlessness, his willingness to disregard the written law and instead enforce his own policies via executive fiat…the President’s taste for unilateral action to circumvent Congress should concern every citizen, regardless of party or ideology.”


Americans will soon have little recourse against a government intent on controlling every aspect of their lives, spying on them, and arresting them for criticizing it.

A May 16 march on Washington may cause the White House and the Congress to pause in its attacks on our freedom and liberty. One can only hope that millions participate.


Americans fought a war to end slavery. Will we have to fight to resist becoming slaves?

Nice to have you aboard, Alan!

I see that you have finally reached the same conclusion many patriots arrived at years ago - that liberty in the United States of America cannot be restored other than by civil war.

The NDAA in concert with the large military-like purchases (machine guns, ammo, tank-like vehicles, etc.) by Homeland Security the past few years is the final event to cap the Socialist takeover of America. And this militarization of Homeland Security is unconstitutional, at best. That's what really frightens me and should scare the crap out of all freedom loving Americans!

I shared this on G+ Very interesting and true. Thank you.

Here in Texas we honestly don't feel like we've lost nearly as much as have many in other states, but if Texas ever turns &BLUE* the last best chance, the bastion of American freedom will be rendered powerless...

Texas being taken by the Dems? LOL, think of a snowball.. IN HELL..

The Lone Star state is becoming a magnet for a gathering of patriots, Glenn Beck has moved his studios there and Sean Hannity may be showing up soon.

If an insurrection does break out, I think the rebels will rally around Texas, the Heartland states and the South.

In the mean time many snowbirds are telling New York state, "You can go to Hell, but I'm going to Texas."