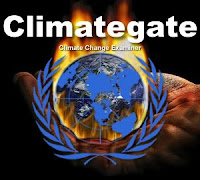 The utterly baseless case for “global warming” is melting a lot faster than the glaciers in India’s Himalayas which, by the way, are not melting.

It is time for the Nobel Committee to rescind the Peace Prize given to Al Gore and the United Nations Intergovernmental Panel on Climate Change (IPCC).

It is time for the Academy of Motion Picture Arts and Sciences committee to take back Al Gore’s Oscar for “An Inconvenient Truth”, an alleged documentary that became mandatory viewing for students in the U.S. and around the world. Purporting to “prove” that the Earth was rapidly warming due to the rise in “greenhouse gases”, it is a fraud.

In the event the news hasn’t reached you, in mid-August 2009, after repeated requests for the Climate Research Unit’s raw data from which it calculated global temperatures, the CRU at the University of East Anglia (UK), a key element of the UN’s IPCC, announced that it had discarded the data, thereby making it impossible to determine if their assertions of rising global temperatures were accurate and true. Or not.

In October 2009, in the annual meeting of the Geological Society of America, it was demonstrated that the IPCC’s tree ring data from Russia that showed a cooling after 1961 had been disguised in its report (AR4) that, of course, asserted the Earth was warming.

A month later, just prior to a huge, international Conference on Climate Change in Copenhagen, emails from the CRU were leaked, revealing the lengths to which the CRU staff had gone to discredit and suppress any independent studies that disputed the global warming thesis.

In brief, the entire "scientific" basis on which the IPCC “scientists” and global warming advocates like Al Gore made their claims was a fraud. It rendered AR4 “scientifically questionable” in the polite parlance of the worldwide scientific community.

In January, Joe D’Aleo and E. Michael Smith released a detailed report that indicted the U.S. National Climatic Data Center and the National Aeronautics and Space Administration’s Goddard Institute of Space Studies for having eliminated many meteorological stations from their data bases in recent years and, to no one’s surprise, the stations were mostly in colder climate areas. Without their data, the “warmists” could continue to claim the Earth was in a warming cycle.

None of this came as a surprise to the “deniers” and “skeptics”, many of them internationally renowned climatologists and meteorologists, who had attended the Heartland Institute’s two international conferences on climate change, participating in seminars and addressing attendees to provide the truth; the Earth has been in a cooling cycle since 1998, any prior warming was a normal and natural cycle following the Little Ice Age that ended around 1850, and the claims of the IPCC and other alleged science-based government agencies were utterly false.

The sheer magnitude of the deception, directed and orchestrated from within a United Nations entity, given support by United States and British agencies, and further supported by multi-national groups such as the European Union, made it difficult for the average person to believe anything other than the elements of the hoax that were constantly proclaimed and then reinforced by the media and Hollywood.

When the global warming dam burst, millions around the world would conclude what they had always suspected; there was no global warming and all the billions spent in the name of “reducing greenhouse gases” or “clean energy” was part of a massive fraud, a set-up to permit new forms of taxation and to enrich the participants.

That is the case against multinational organizations such as the United Nations and the European Union, to name just two. They are, too often, giant propaganda machines whose agenda is to eliminate fundamental concepts of individual liberty and freedom, replacing them with faceless bureaucrats with no obligation to be responsive to citizens anywhere.

A U.S. President, Barack Obama, who attended the UN Copenhagen Conference and would, in the course of his State of the Union speech, claim that there was “overwhelming evidence” of climate change a.k.a. global warming, is part of the cabal that would waste taxpayer’s billions on "green jobs", “clean energy”, and “biofuels” as opposed to actually encouraging the building of nuclear and coal-fired plants, exploring and extracting offshore oil and natural gas reserves, and maintaining the nation’s vital infrastructure.

A rogue government agency, the Environmental Protection Agency, is brazenly warning Congress that it will regulate carbon dioxide if it does not pass the patently false “Cap-and-Trade” legislation intended to limit so-called “greenhouse gases.” The EPA must be reined in and a complete housecleaning is necessary to repeal the many regulations and laws based on the global warming fraud.

The U.S. needs a new Congress filled with men and women who want to protect the nation against the frauds perpetrated by its own science-related agencies, to kill legislation that would impose a massive tax on energy use, and bring the global warming advocates within the government to the bar of justice.

The world needs to dissolve the United Nations in the same way it shunted aside the useless League of Nations. The present institution should be broken into units that perform legitimate services, but governance is not a legitimate purpose. No global taxes. No global army. No global propaganda machine.

Nations, worldwide, need to reclaim their sovereignty and then work together for the mutual goal of peace and other worthwhile causes.
Posted by Alan Caruba at 11:03 AM

Some time last year I wrote my 2-Senators and Representative in the House,(Ala-by-Golly-BAMA). I told them I wanted their opinion, thoughts, and beliefs on cap-n-trade, Health Care, Budget and other matters. I told them I was watching and listening like my vote depended on it. All 3 responded. Like me they can tell the South end of a North bound mule from their shoes. Yep they will get my vote.
Lord Christopher Monckton's Power Point presentation says it all. One of the best conclusions in the presentation is thus:
The WHOLE WORLD would have to quit driving any vehicles, burn any fuels for warmth or the generation of power and such for the next 33 years for the temperature to change 1 degree, ( I think that's roughly how he put it). It's a lot of details, but hey, it's the TRUTH. If any have not seen it I recommend it!! Search- Lord Christopher Monckton.
Those DA's in DC,( and I don't mean district attorneys), the UN, EU and their ilk are...well....idgitz.
GREAT job Mr. Alan!!! You can't see or hear it. But, every time I read your Blog I give you a standing ovation!!!

Paul:
Glaciers around the world are not receding. They are growing. Semantics and word games do not change reality.

PS. You need to provide a profile to Blogger.

I'm corrected - it looks like many Himalayan glaciers have been growing. I guess that must mean some combination of more moisture feeding into them and/or less water running off. Must be plenty of graduate students running off to study that!

You don't have to be a graduate student or even a scientist to know that the Earth, particularly the northern hemisphere, has gotten colder in the past decade.

For more information, check out
www.iceagenow.com that tracks this information and offers more on natural cooling cycles and, yes, the inevitable next Ice Age.

Hello Mr. Caruba. I have been a frequent reader of your blog since last 2 months. I was very impressed by the way you have presented the information against Global Warming. I am an unbiased observer of the global warming phenomenon for some time and have come to agree with views similar to you presnt. I would appreciate if you could put in some references citing your facts and strengthen an already credible article.

Thank you and may I say that I do reference, i.e. document, what I say in a commentary, but the subject of global warming is so big that this blog links to a number of other websites that provide vast quanities of information and insight.

They include ClimateDepot, IceAgeNow,ClimateChangeFraud and others. It is up to the reader to visit these sites and others for the indepth information they need.

Keep reading Warning Signs and let your friends know about it.

Good work Paul. I dig the fact you have connected the dots in regards to Global Tax/Governance - a task some people are not willing to comprehend. Unfortunatly I think the U.N will swell with power as it's agenda is so monolithic. Kind regards from England. Graham.