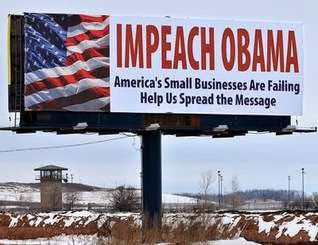 
I am beginning to think that, short of Obama being videotaped murdering a Fox News reporter on the east lawn of the White House, he will not be impeached.


Calls for a president’s impeachment are commonplace. I have written in the past that Obama was likely unimpeachable on the constitutional grounds of treason, bribery, or other high crimes and misdemeanors.


Even so, I increasingly believe that Obama should be impeached.


The Framers were intentionally vague about the definition of high crimes and misdemeanors, but experts on the Constitution define the terms to mean any serious abuse of power to include both legal and illegal activities. Thus, misconduct, violations of the oath of office, and serious incompetence fall under the purview of impeachment.


I don’t think one has to be a lawyer to conclude that deliberately and repeatedly lying to Americans about the passage and implementation of the Affordable Care Act that is depriving them of their preferred healthcare insurance, fining them if they do not purchase insurance they may not want or need, while giving the federal government control over one sixth of the nation’s economy is an impeachable offense.


Everything involving Obamacare wreaks of an attack on the most fundamental elements of the Constitution whose emphasis is on individual liberties and whose construction strictly limits the powers of the central government. Requiring people to purchase something they don’t want strikes me as distinctly unconstitutional and, indeed, the Supreme Court gave Obamacare a pass by ruling it was a tax.


I have no doubt that presidents have lied to the public in the past. Even George Washington was accused of being a “usurper” of powers not delineated in the Constitution when, over the course of the first two terms of the presidency, he asserted the right of the chief executive to control executive appointments, determine foreign policy and military affairs, as well as government finances, and federal law enforcement. He was the first to legislate by presidential proclamation and to issue secret fiats under the cloak of executive privilege. Those powers exist to this day, passed down through the office to its 44th occupant, Barack Obama.


I think impeachment is needed because we face three more years of Obama’s presidency and, with Obamacare alone, he has wreaked havoc on the lives of millions of Americans by deception.
The impact on the nation’s economy is already being felt in the reduction of working hours that it has imposed on millions, the reduction in the creation of jobs well below normal growth, the huge increases in the costs of healthcare insurance, the structural instability of the funding aspects of the law, and the interposition of the government between patient and doctor. The inclusion of the so-called death panels is real and is an abomination.


If Obamacare by itself is not cause for impeachment, the deliberate hollowing out of the U.S. military poses a threat to the security of the nation and the recent removal of high ranking officers raises memories of Stalin’s purge of generals deemed likely to oppose his tyrannical control. The morale of the members of the armed services is likely at an all-time low and recruitment for the all-voluntary service is surely impacted as well.


It appears that Obama intends to rule by executive order as his means of by-passing the authority of the Congress. It has proven to be a weak instrument of restraint and polls show it is held in very low esteem.


The basis of the failures and cover-up of the Benghazi attack that resulted in the death of an American ambassador and three others should be sufficient cause for impeachment. It was dereliction of duty.


The use of “climate change”, aka “global warming” as justification for the destruction of essential elements of the nation’s supply of energy and the scandals involving the waste of billions in loans to “clean energy”, wind and solar companies, is further evidence of the President’s deliberate deception of the public. There is no warming. The Earth has been in a natural cycle of cooling for about seventeen years and is likely to continue for many years to come.


The recent negotiations with Iran have revealed that Obama has already begun to lift aspects of the sanctions placed on that rogue nation. Permitting Iran to acquire nuclear weapons is, I suggest, a crime against humanity.


Do I think that Obama will be impeached by this Congress? No.
The Republican Party that controls the House is sharply divided and the Senate, in which the trial would occur, is controlled by the Democrats, the President’s party. There will be no impeachment.


Realistically, the only remaining hope is the forthcoming 2014 midterm elections. Voters, millions of whom are being adversely affected, may conclude that candidates who have supported Obamacare in the past should be removed and those who want to repeal it in the future, should be elected. Between now and then, we shall surely hear of Americans who have died as the result of losing coverage. In the plainest term, that is murder.


We have reached a point in which Obama is actually lying about the lies he has told. We may not be able to remove him from office, but he can be politically neutered if enough Americans wake up to the dire threat he poses to the nation and to their lives.

Excellent political analysis of the decline and (hopefully) fall of the Obama Regime!

I agree with you 100% that Obama will not be Impeached, but he may go the way of Nixon and resign as part of a plea bargain with a Republican Congress.

On the other hand, Obama is not rational like Nixon and to date his response to opposition has been to double down, which he is already doing in regards to his Executive Orders.

In fact, it could be argued that Obama for at least the last two years has become a dictator who rules by Decree.

...and we know from world history how a dictator reacts when determined citizens seek his resignation from the highest office...

This is a man who is on record bragging about being a "pretty good killer" in reference to drone strikes.

Therefore, I see a major insurrection in the next few years as the Russian Bolshevik Revolution of Obama runs head on into the American Revolution of George Washington.

Jailed, that would be my greatest wish for Obama, jailed like the criminal SOB that he is...

Impeached? Nope, never happen, you must have a Congress and Senate that possesses the integrity of their office, the moral compass of a leaders and the courage to act...

Neither House possesses those qualities...

if found that he in fact is NOT A CITIZEN of the USA then he will be removed and all he has done is null and void!!! I say, based on the false social security number and those who are looking into his birth as we speak, can find enough to remove him from the office he has no business of holding and do away with ALL HE HAS DONE!

Sadly, the morons who ignored all the diagnostic signs of his abject ineptitude and voted him in TWICE would just claim those of us who detest his moral bankruptcy, cupidity, avarice & dirty dealing were racists, and the bipartisan clowns in Congress,would capitulate faster than Chamberlain to Hitler.
I despise both his black AND white sides as both have the same goal-steal from the "haves" and gift the "have less." The THIEF-in-CHIEF must be stopped!

The ONLY reason that obama will not be impeached is the fact that he is HALF Black, & nobody, but nobody, wants to be accused of being "racist" by impeaching, let alone convicting, the first "Black" President, no matter how incompetent, how crooked, how Socialist, just how BAD he is for the United States. The mid-term elections are our last chance to rescue America from this tyrant & his path to destruction.

Well written...what is left for us then?

A Obama Senate, then a WEAKLY LED CONGRESS by a person who seems extremely shy, inept, and fearful of defending his own country, this Republic...then a contaminated Republican Party (RINOs)...but finally...

A diluted Military, the removal of General officers who would respond in a heart beat to their call to duty to preserve the Republic by forcefully removing Obama, and maintaining the government until appropriate mending has taken place....but now it seems that "ace in the hole" has been cleverly illuminated.

Look, Obama reads history, primarily of dictators, dictatorships, and how they did it!

Ok, try this on for size...a complete, forceful, march on DC, followed by nationwide riots and destruction, total civil disobedience...

Obama declares Martial Law based on a "National Emergency"...dissolves Congress, and puts on his already "tailored_to-fit" Supreme General's Uniform..and sends "his" military to defend his ass and actions...

Don't count on enough Americans waking up out of their long slumber...

"Had Enough" comments are sufficient, Roger Harris stated the obvious and is correct. Cameron is precise in his assessment of why there will be no impeachment. I do not want him impeached. I want him arrested! Treason, and most of all for removing career officers from the ranks and replacing these good people with queers who will do only what "He says". The audacity to say that the murders on the army base by a muslim psychologist was "work place violence" is laughable if not out right wrong. Therefore, he is "aiding and abetting a criminal" and is guilty of conspiring to commit murder on American soil, on an American army base.