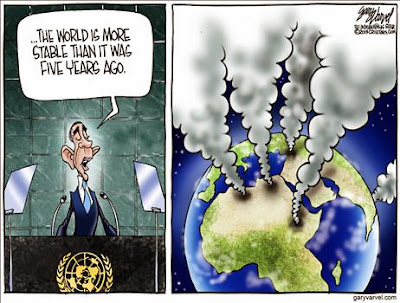 
News about events in Syria took a nosedive the moment the Russians stepped in to take on the job of destroying Bashar Assad’s arsenal of poison gas. It’s not as if Syrians aren’t still dying.


One of the few reliable journalistic enterprises, The Wall Street Journal, put Syria on its front page on December 3. “U.S., Allies Reach Out to Syria’s Islamist Rebels.”  One is tempted to wonder out loud whether the U.S. still has any allies given the way Obama has betrayed those who stuck with us through the Cold War and since, along with the Gulf State nations for whom the U.S. has provided an umbrella of military protection.


“The U.S. and its allies held direct talks with key Islamist militias in Syrian, Western officials say, aiming to undercut al Qaeda while acknowledging that religious fighters long shunned by Washington have gained on the battlefield,” reported the Journal.


Translation: The U.S. has no influence left in the Middle East and President Obama, desperately seeking “a legacy”, has decided to give Iran whatever it wants even though it has essentially been at war with us since the Islamic Revolution in 1979.

Whatever has passed for his foreign policy these past five years has proved to be a failure. Even Americans have concluded that the nation is no longer the influential force it has been since the end of World War Two.


So, Iran has become Obama’s new Best Friend Forever. Or at least until it acquires nuclear weapons of its own and, by then, he is likely to be out of office and hailed as a “statesman” by the slavish mainstream press. He is the only U.S. President who was given a Nobel Peace Prize for having accomplished nothing in the early months of his first term.


“Some officials in Western capitals remain wary about courting these groups, whose ultimate goal is to establish a state ruled by Islamic law, or Sharia,” noted the Journal article. That did not deter the U.S.-led coalition that signed onto the recent agreement with Iran. It is an agreement that Iran immediately reinterpreted as permission to continue enriching uranium and plutonium. In short, the U.S. has legitimized Iran’s goals, but not without some empty expressions of concern while providing Iran with several billions in money sequestered in earlier years.


The UN sanctions were working, but they have been undercut by the “agreement.”


“President Obama is overseeing a radical rupture with past American policy in the Middle East,” said Tony Badren in a commentary from the Foundation for Defense of Democracies. “It has become evident that the White House is determined to extract the U.S. from the region and upend the American order that has been in place for decades. In the process, the Obama administration is building up Iran at the expense of historical partners.”


“We now understand that Obama’s decisions in Syria over the last two and a half years were all geared toward a deal with Iran,” wrote Badren. “The U.S. is now effectively hostage to the deal with Tehran.”


The deal with Iran has been widely compared to the deal that Britain agreed to in Munich with the Nazi regime, said to have produced “peace in our time” that was quickly ended when Germany invaded Poland after having signed a secret agreement with the then-Soviet Union to divide the nation between them. It is an accurate comparison, but one made worse by the element of nuclear weapons in the hands of a nation that either has or will have the ability to deliver them anywhere in the Middle East and to Europe via intercontinental missiles.


Saudi Arabia—the epicenter of Sunni Islam—fears Iran’s growing expansion of Shiite influence and has been providing support for the Islamic Front, but the Front collaborates with al Qaeda and advocates ethnic cleansing while rejecting democracy.


If all this seems confusing, it is.


There is less confusion about Obama’s aims. He has wanted to get the U.S. out of the Middle East and made no secret of it. Both the Saudis and the Israelis are now on their own and the former is expected to purchase its own arsenal of nuclear weapons, presumably from Pakistan.


Obama’s foreign policy portends some very ugly confrontations in the Middle East along with the growth in influence that al Qaeda and comparable Islamist groups are seeking to acquire.


This is extremely bad news for the West. It raises the question of which side Obama is on. His sympathies for Muslims have long been a matter of record.

Barack Hussein Obama is the WORST thing to ever happen to the USA...

I once thought him too dumb to be this destructive but of late I see a POTUS that is SO evil that he would betray America and surrender to Islam and sharia..

We are in agreement on that.