There Will Always Be War 
We begin with the reality that the United States and many other nations are at war with militant Islamists. They are a growing army of religious zealots murdering Christians, Jews, others who are not Muslim, and even other Muslims.


In my youth America knew how to win wars. In Europe it bombed Germany into submission, leading its allies in an invasion that left Germany divided for decades until the Soviet Union collapsed. In Asia Truman dropped two atomic bombs on Japan because they didn’t get the message when Hiroshima was destroyed on August 6, 1945. It took a second bomb on Nagasaki on August 9 to bring about Japan’s surrender.


Millions died in World War II but the alternative would have been the loss of freedom for millions worldwide.


If one spends any time learning history, the primary lesson is that war has been a constant factor from the beginning of what we call civilization about five thousand years ago.


The Bronze Age introduced new weapons that gave the residents of the Fertile Crescent in the Middle East a distinct advantage over invading nomadic people, but the invaders introduced chariots and it took the Egyptians and Babylonians a while to catch up. War has always been about new, more lethal weaponry.


Why would we be surprised to learn that the Assyrians who originated in what is now northern Iraq or the Islamic State (ISIS) were the most violent and bloodthirsty of the ancient world’s peoples? Known to all their neighbors by 1300 BC., their army become a source of terror for the Middle East during the ninth century. They destroyed the Kingdom of Israel around 732 BC, but the southern part of the Kingdom of Judah survived. In time the Babylonians would defeat the Assyrians.


Not all wars involved religion. The Greeks fought each other and then fought the Persians. Alexander the Great, a Macedonian, loved waging war and was very successful. The constant factor, however, was war and, of course, Rome would become the greatest empire of its time, beginning around 509 BC, fighting three Punic wars with Carthage, but losing an estimated 400,000 in the first war and 150,000 in the second.


Eventually, Rome was so powerful it imposed a “Pax Romana” on the entire Mediterranean area it controlled. In time, Rome would be destroyed by the “barbarians”, Visigoths, Vandals, Ostrogoth’s, and Burgundians. By 476 AD, the Roman Empire was history.


After establishing a group of followers in the Arabian Peninsula as the “last prophet”, proclaiming Islam as the one, true faith, Muhammad died in 632 AD Within ten years, the Arabs had conquered Jerusalem and were taking aim at Damascus and Cairo. Baghdad and the Libyan Desert were the next to be conquered. They moved on to Spain and Central Asia. 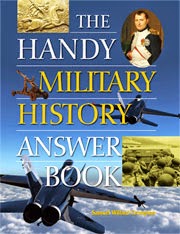 During his lifetime, Ali, Mohammad’s son-in-law, was the leader of the Arab forces. As noted in Samuel Willard Crompton’s ‘The Handy Military History Answer Book’, by the time the Arabs fought the Byzantines and the Persians they had also initiated the great split that remains today between the Sunnis and the Shiites.” Shiite means “follower of Ali.” The Sunnis wanted to elect their own caliph.


After taking the southern half of Spain, the Muslim army was poised to take all of Europe, but their 732 AD defeat in the Battle of Tours put an end to further expansion. Their momentum in Asia was stopped in 751 AD with a defeat in the Battle of Talas. As Crompton notes, “in the century that followed the Prophet’s death, the Arabs took over ninety percent of all the urban centers in the Western world, and their conquests equaled those of ancient Rome.”


Which brings us to the first Crusade; it began when Pope Urban II in 1095 told a gathering of 10,000, mostly French and German knights, that a “new accursed group”, the Muslims, had taken control of the holy land were preventing pilgrims from visiting holy sites. The knights responded to his call to liberate Jerusalem by chanting “Deus Volt! Deus Volt!”—God wills it.


They were joined by a “Peasants Crusade” between 1095 and 1096. By June 1099 the knights arrived outside Jerusalem and what followed was a wholesale murder of everyone there. In 1185, Saladin, the emir of Cairo and Lord of Damascus, proclaimed a jihad—a holy war—against the Christians in the Kingdom of Jerusalem. The knights defending it were defeated.


A Second Crusade followed in 1147 AD. but accomplished little and the Third Crusade had the same result. A Fourth Crusade resulted in the Europeans taking control of Constantinople in August 1204 AD. They would rule it for the next fifty years. Years later, in 1489, a war drove the Muslims from Spain.

The spokeswoman from our Department of State who said that the present generation of Muslim holy warriors can’t all be killed doesn’t know that this is the way wars are won. You kill the enemy until the enemy decides that dying for their cause is not worth it.


If ISIS is insane enough to bring the war to our homeland (and even if it doesn’t), a war of total destruction will be the only way to end the present conflict. Currently, the Jordanians and the Egyptians are doing what they can to resist ISIS, but recent polls confirm that Americans are beginning to conclude that our active boots-on-the-ground participation is the only way this will end.


Obama is merely going through the motions of conducting a war against ISIS, but retired generals and diplomats have told Congress that only full-scale war will end the threat they represent.


Meanwhile, ISIS is committing genocide against the Christians of the Middle East while Boko Haram is doing the same in Africa. Hezbollah would do the same against Israel if it could. Given nuclear arms, Iran will assert control over all of the Muslim warriors, threatening both Israel and the U.S.


Our next President will have to commit to destroying ISIS. There is no alternative. That is history’s primary lesson.

You hit the nail on the head, Alan!

I predict the next chapter in the history book will be, "World War III" where the West once again confronts the East in bloody combat.

And I predict you're right!

Obama will not commit to destroying ISIS, because he is partly, fundamentally on their side -- he wants to "address their legitimate grievances". And he thinks so highly of Islam that he refuses to even call ISIS "Islamic" (he--along, no doubt, with the "moderate" or "peace-loving" Muslims of the world-- thinks ISIS needs his approval to be Islamic). The truth is, "peace-loving" Muslims (and learned idiots like Obama) really need to understand that they follow the teachings of Jesus (the "Prince of Peace") rather than Mohammed (who became just another cult leader, rationalizing his many spiritual failings and bloody transgressions against all those his "religion" would--could only--coerce into obedience).

Islam was clearly developed to unite the ever-warring tribes of Arabia, in imitation of--and as a reaction to the societal success of--Christianity by the time of Mohammed. Islam failed to overcome the older tribal jealousies from its very beginning (as the fundamental Sunni/Shia split, for that whole length of time, well demonstrates), and it has always been understood as requiring war to spread its influence.

At bottom, the evil is in the coercion in the name of God; Islam--which in the ancient understanding is I-salam, or "No Peace"--still takes such coercion to every extreme.