What Just Happened to the Rule of Law? 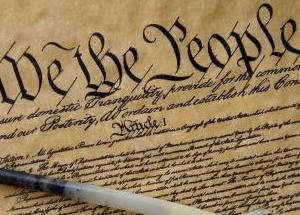 Following the Obamacare decision, The Heartland Institute’s Maureen Martin, a Senior Fellow for Legal Affairs, said, “Today’s decision will go down in infamy. It marks the moment when we all lost our freedom because the Supreme Court drew a road map to guide those dedicated to imposing a totalitarian, statist government on the American people.”

A Heartland colleague, Peter Ferrara, a member of the bar of the Supreme Court and a Senior Fellow for Entitlement and Budget Policy, said “The Supreme Court of the United States just endorsed the most fundamental dishonesty of our politics today. The President intimidated Chief Justice John Roberts like Hugo Chavez intimidates the Venezuelan Supreme Court. The rule of law is now dead. The American people have only one more chance now to save their country.” Heartland is a non-profit, free market think tank.

A lot of Americans may begin to feel like the Jews who lived in Nazi Germany. On September 15, 1935, the Nazi government passed the Nuremberg laws. They were intended to make life in Germany so unpleasant that it would force them to emigrate. Those who could escaped what would later materialize as the Holocaust, the deliberate extermination of all the Jews of Europe. One of them was Albert Einstein who found sanctuary in the United States.

To give you a taste of what it was like, the Reichstag’s Nuremburg laws prohibited marriage between Jews and Aryan Germans. Intercourse between Jews and “subjects of German or kindred blood” was forbidden. Jews were forbidden to fly the Reich and national flag. It did not take long for Jewish teachers, lawyers, and physicians to be stripped of their right to work.

What does that have to do with Obamacare? Americans who could rely on the political system to moderate and even reduce taxation now know that the December 28, 2012 Supreme Court has ruled that Congress may tax anything, including behavior. Americans no longer are free to determine what they wish to purchase or not. Either they follow the dictate of the federal government or they will be fined.

Obamacare has now transformed the United States into a police state.

Twenty-seven U.S. States joined together to oppose Obamacare and they and the other twenty-three now know that they are no longer separate and sovereign republics, but must yield to the federal government’s demand that they create “exchanges” where health insurance must be purchased.

Arizona has already discovered that the federal government will not permit its law enforcement authorities to participate in protecting its border with Mexico despite the havoc illegal immigration has wreaked on that State. Other States have encountered the same response.

America’s older generation, covered by Medicare, will discover that panels of bureaucrats will determine the extent of the health care they can receive. They will discover as those in England’s health system that the wait to be admitted to a hospital can result in death.

The younger generation will suffer as well. As Paul T. Conway, the president of Generation Opportunity, a non-profit, non-partisan organization that seeks to mobilize young adults who are dissatisfied with the status quo to create a better future for themselves, has said:

“President Obama’s health care law stands as one of the largest tax increases in American history. It will be paid by young Americans whose dreams and plans for the future have already been derailed by failed policies that have denied their access to full-time, meaningful jobs in their chosen career paths.”

“Young Americans,” said Conway, “know they will pay the true costs of President Obama’s legislation—over a trillion dollars more in federal spending, more waste and fraud, increased American debt, and the inability to keep or choose healthcare plans that best suit their needs as individuals.”

Young, old, and all other Americans will wake now to an America that they have not known, nor ever conceived could exist; a nation in which the rule of law no longer is a guarantee of the Constitution’s limits and separation of powers.

I'm wondering how Roberts can hold his head up high after this decision. Seems he was only too eager to bow down to Obama in any way, even if he had to sell out his fellow Americans and hide behind a tax. I wonder how the Founding Fathers would view this traitorous act on their people, who they went to great lengths to protect in the Constitution. America's definition of democracy is now the same as for Marxism/Socialism/Communism. Who would've thought?

Obama and the rest of his socialist minions have now destroyed our nation. The precedent set today will have huge consequences. Now that the slimy liberals are emboldened, we'll be seeing more legislation concerning every freedom we hold dear. I'm afraid if this continues, we'll be seeing a violent revolution in this country. People are not going to stand for this. Oh and thank you Justice Roberts. You have proved what a weasily SOB you really are. I'm sure Bush is kicking himself for ever even considering a turn coat creep like you.

In 1857, the U.S. Supreme Court declared slavery was legal.

Most American Republicans thought otherwise and in 1865 Constitutional Amendments 13, 14, and 15 reversed the court.

I say ObamaCare will not stand, as the American People are the last word on matters constitutional.

It is war. I call it the "War of the Insane Left".

Steve, I'd be real interested in hearing what Bush has to say about his appointment of Roberts right now ...