No Strategy. No Clue. 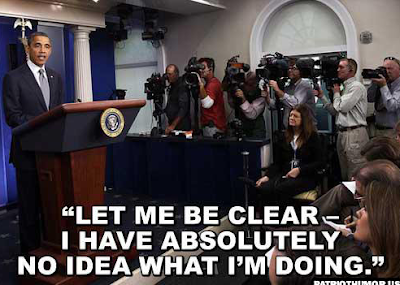 
The Wednesday, June 10 Wall Street Journal headline at the top of the page was “Obama Set to Expand Troops in Iraq.”  We were 589 days into the two terms Barack Hussein Obama has served in the office of President of the United States and he is as clueless now as he was when he arrived on January 20, 2009.


We have had losses because (1) Obama was elected on a promise to end the conflict in Iraq and (2) reelected by pulling out troops to the point that the remaining Iraqi troops—Shiites in the south—decided it wasn’t worth dying for their leaders. Can’t say I blame them, but dying at the hands of ninth century Islamic fanatics is the fate that threatens the entire Middle East, not just Iraq or what’s left of it.


This is how we lost the war in Vietnam. There was a time when Americans utterly destroyed their enemies on the battlefield. In the latter half of the last century, starting in Korea, we forgot how to do that and why that’s how wars are won.


In all candor, like a lot of Americans, I went back and forth about the Mideast conflicts. Looking back, I think George H.W. Bush showed remarkable insight when, after driving Iraq’s Saddam Hussein out of Kuwait, he stopped at the border and came home. George W. had the notion he could somehow introduce democracy to the region. He couldn’t and it will likely never really occur there because Islam is the only law and it has kept the region ignorant, backward, and under the thumb of tyrants for centuries.


The Islamic State troops must be stopped at some point, but Obama is not the President who will do it. Whatever U.S. backed combat occurs will be just enough to present enough television news images to convince the gullible that progress is being made.


Obama arrived in office without any strategy and has spent the last six and a half years “muddling through” as the British say. He and the Democratic Party had only one goal; to win the elections. After that, they wanted to “fundamentally transform” the greatest nation on planet Earth. They have largely made a mess out of everything they touched from ObamaCare to Common Core.


There’s a reason why Obama will send more troops and that’s because every one of our allies has told him that, if the U.S. does not again assert its role of global leadership, they are not going to cooperate with him in a thousand different ways.


Our allies in the Mideast have told him they lack the military strength (and will) to conduct any kind of war with ISIS. The U.S. and much of the rest of the world cannot afford to sit by and let the enormous oil wealth and reserves of the Mideast come under the control of ISIS.


So, once again we read headlines about U.S. troops returning to the Mideast.


What that means is that the 2016 elections are more critical to the future of the nation than all previous ones.


I think Americans, liberals, conservatives and independents alike have had more than enough of President No Strategy. I think there are enough older Americans who remember and take pride in a nation that was unabashedly the world’s leader in the pursuit of peace and democracy. And I think that the thirty percent or so of brain-dead liberals are not sufficient to affect the outcome of a 2016 election devoted to restoring the nation’s economy and leadership.

1. Saddam: What We Now Know (link) by Jim Lacey* draws from the Iraq Survey Group (re WMD) and Iraqi Perspectives Project (re terrorism). * Dr. Lacey was a researcher and author for the Iraqi Perspectives Project (link).
2. Explanation (link) of the law and policy, fact basis for Operation Iraqi Freedom.
3. UN Recognizes 'Major Changes' In Iraq (link) by VP Joe Biden on behalf of the UN Security Council.
4. Withdrawal Symptoms: The Bungling of the Iraq Exit (link) by OIF senior advisor Rick Brennan.
5. How Obama Abandoned Democracy in Iraq (link) by OIF official and senior advisor Emma Sky.

"Looking back, I think George H.W. Bush showed remarkable insight when, after driving Iraq’s Saddam Hussein out of Kuwait, he stopped at the border and came home."

President HW Bush did not "stop at the border and come home". With the United Nations, HW Bush set up comprehensive terms of ceasefire for Iraq, principally UNSCR 687 and UNSCR 688, and committed the US as chief enforcer of those terms of ceasefire. Subsequently, the casus belli for the no-fly zones, Operation Desert Fox in 1998, Operation Iraqi Freedom in 2003, and the stream of US-Iraqi military confrontations between 1991 and 2003 that culminated in OIF was the Iraqi breaches of the terms of ceasefire that President HW Bush and the UN set up in 1991.

In particular, the humanitarian mandates of UNSCR 688 (1991) and the US-led enforcement of UNSCR 688 set the course to regime change.