The GOP Morning After 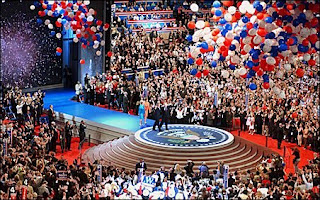 Republicans woke up on Saturday morning with the realization they have nominated one of the most liberal candidates for President in decades. After eight years of George W. Bush who didn’t veto a single spending bill until after the GOP lost control of Congress in 2006, and after ballooning budgets and deficits, Republicans in Washington, D.C. have become Democrats.

Need proof? Sen. McCain’s preferred choice as his Vice Presidential running mate was his long-time friend and Senate colleague, Joe Lieberman, who you may recall was Al Gore’s running mate when he ran for office.

If Republicans have some unspoken regrets about their candidate, at least they are not Democrats who choose Al Gore, followed by John Kerry, and their current choice, Barack Obama. If the Democrats didn’t have an electoral death wish, things might look worse for the GOP.

Gov. Sarah Palin has energized the Republican base because she is, in many ways, everything Sen. McCain is not. She is a real conservative and the base knows it. At the same time, it must be said that vice presidential candidates do not win elections. Only the top of the ticket can do that.

Sen. McCain’s speech was just okay. No doubt it will be his “stump speech” for the next eight weeks, promising to sweep away Washington’s lobbyists and “special interests”, but only children believe such rhetoric.

The nation’s capital is all about politics. It’s a company town and everyone who lives or works there knows that “issues” may energize those who follow events from afar, but it is taxation and the redistribution of money that is the real business of Congress. Who gets to do that is the reason the two parties square off against one another.

The problem for the rest of us is that the two parties are too often virtually indistinguishable these days. Both are for big and bigger government. Both intend to ignore the gathering storm of under-funded entitlement programs. Both will, if the public lets them, grant instant citizenship to millions of illegal aliens. Both will talk tough about the renewed Russian menace.

Though Bush and now McCain were accused of being war-mongers, the United States could not have invaded and occupied Iraq without the funding support of Democrats in Congress. It was Democrats who wanted to run away when things got tough. It was Republicans who saw the conflict through to a successful outcome.

Then there's the factor that is rarely acknowledged. For nearly fifty years, barely half of the registered voters actually showed up to cast a vote. For the more recent presidential races, the results have been so close that it revealed how sharply divided voters are. There is a liberal base. There is a conservative base. They are the ones who vote.

The problem for conservatives is that we have been severely disappointed by the last eight years of the Bush administration in all, but one respect, his response to 9/11. Conservatives understand the need to go on the attack against our enemies and to remove threats to global peace.

The Bush administration’s failure to be aggressive regarding the nation’s need for energy security is just barely obscured by the Democrat’s aggressive efforts to leave America vulnerable to energy-rich unfriendly nations while thwarting efforts to develop our own national energy reserves.

Lastly, we tend to forget that Sen. McCain is among a swiftly diminishing group of people who believe "global warming" is real and that programs involving the reduction of carbon dioxide emissions are needed. As a new Little Ice Age takes shape, this is about as wrong as one can get, especially if one is President.

What Sen. McCain has going for him is character and experience. He has been tested by life. Perhaps more than any other factor that will undermine Sen. Obama’s quest is the growing perception that he has little to show for his brief time in public service and a host of very questionable friends and associates.

How these factors play out over the next eight weeks will determine the shape, content and events of the next four years.
Posted by Alan Caruba at 11:29 AM

When I learned McCain did not know how to use a PC, that was confirmation to me of his cluelessness. Where does he get his information? On top of that, he is difficult to look at when he speaks. Like a corpse. Why does he represent the Republicans? He has betrayed the party many, many times, and his election will be the end of the Republican party.