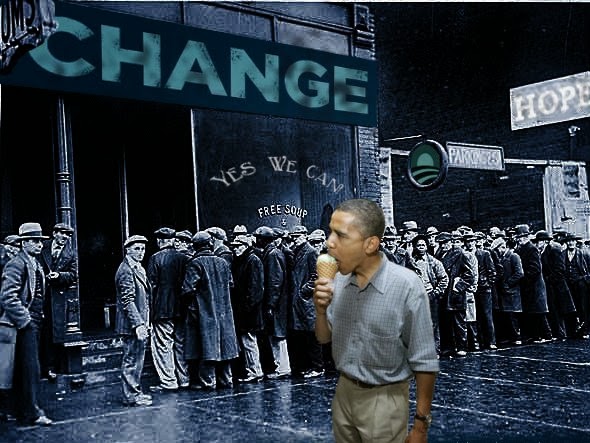 
A President who thinks that extending unemployment compensation “creates jobs” is so out of touch with reality that it should come as no surprise that Obama has the worst record of unemployment rates since the days of the Great Depression in the 1930s.


The latest employment figures for December showed that the economy only added 74,000 non-farm jobs, the fewest in three years! The government claims that the unemployment rate dropped 0.3%—the first time in 60 months that it dropped below 7%. And the official rate is bogus. The government only counts people as unemployed only if they are actively looking for work.


As of October 2013, The Wall Street Journal reported that “The U.S. now has 90.6 million ‘non-institutionalized’ men and women over the age of 16 not working—an all-time high. That’s 10 million above the 80.5 million when President Obama took office. With total unemployment at 144.3 million, for every three Americans over the age of 16 earning a paycheck there are two who aren’t even looking for a job. That’s an ugly portent for American prosperity.”


In a September 2013 edition of Investor’s Business Daily, Betsey McCaughey, a former lieutenant governor of New York and author of “Beating Obama-Care”, wrote that “After 4-1/2 years of the Obama presidency, an unprecedented number of Americans have given up looking for work, wages are stagnating, low-wage earners are suffering most and the U.S. is fast becoming a nation of part-time workers.”


You can thank Obamacare for the rise in part-time workers as it increased the cost of hiring full-time workers and many businesses have reduced the hours of workers to avoid incurring it. Obamacare is a job killer. From Jan 1 through July 31, 2013, 77% of jobs created were part-time. Fewer than one out of four people got hired for full-time jobs. This is the opposite of a normal economy.


The official Labor Department figure of seven percent (7%) unemployment is a fiction as it does not include the millions who have given up looking for work. Mort Zuckerman, the chairman and editor-in-chief of U.S. News & World Report, writing in a July 2013 edition of The Wall Street Journal, said “The unemployment figure so common in headlines these days is utterly misleading. An estimated 22 million Americans are unemployed or underemployed. That puts the real unemployment rate for June at 14.3%, up from 13.8% in May.”


McCaughey noted that since 2008 Congress has extended jobless benefits from a maximum of 26 weeks to as many as 99 weeks every year, but failed to do so for 2014. While benefits ended for more than 1.9 million unemployed, the President and Congress went on vacation.


Now the most important piece of legislation according to Senate Majority Leader Harry Reid is a three-month extension of benefits. In an election year, this is likely to be extended repeatedly as Republicans are being described as heartless and indifferent, but the facts reveal a President who has been responsible for the millions of unemployed.


According to Paul Harrington, the director of Drexel University’s Center for Labor Markets and Policy, “Back in 2007, 7% unemployment would seem disastrously high, but now it’s more like a humble brag.” For those that are working, the “fiscal cliff” agreement with Congress included an increase of the Social Security payroll tax that raised it from 4.2% to 6.2% which translates for a worker earning $30,000 a year to a loss of $50 a week less in take-home pay.


The percentage of Americans who have a job or are seeking one plunged to a 34-year-low in the spring of 2013 to 63%. Little wonder that a record number of Americans households saw their real income drop by $2,627 and the number of people in poverty increased by approximately 6,667,000 according to the Census Bureau.


Obama’s policies have created a nation of millions on some form of government dole. By June 2013, a record 23,116,928 American households were enrolled in the federal government’s Supplemental Nutrition Assistance Program—AKA food stamps—according to data released by the Department of Agriculture. That outnumbers the population of the entire Northeastern United States or those living in the entire Western U.S.


By December 2013, the total number of people now receiving federal disability benefits hit a record 10,988,269, up from the previous record of 10,982,920 set in November, according to the Social Security Administration. The average monthly benefit was $1,146.43, an increase from the previous December. CNSNews.com reported that the number of Americans getting disability benefits exceeded the entire population of Greece. The number has increased every month for 202 straight months.


The poverty level has broken a 50-year record.

The poverty rate has stood at 15% for three consecutive years, the first time that has happened since the mid-1960s, famed for LBJ’s “war on poverty.” More than $20 trillion has been spent on poverty since then. Today the government spends nearly $1 trillion annually on 80 federal means-tested programs providing cash, food, housing, medical care, and targeted social services for the poor and low-income Americans.


The poverty level is defined by the government as an annual income of $23,492 for a family of four. The poverty is directly attributable in part to Obama’s failed efforts to improve the nation’s economy.


To put it in other terms, the U.S. spent $3.7 trillion on welfare over the past five years that Obama has been in office.


New research from the Republicans on the Senate Budget Committee, reported in October 2013, noted that “The enormous sum spent on means-tested assistance is nearly five times greater than the combined amount spent on NASA, education, and all federal transportation projects.


It isn’t even the entire amount because states contribute more than $200 billion each year, primarily in the form of low-income health care. And, of course, Obamacare has already produced an increase of those enrolling in Medicaid.


The statistics all add up to a nation in which Americans are worse off since the election and reelection of President Obama and we have another three years in which to endure his historic failure to turn around the economy. What can we expect from a President who thinks that unemployment compensation “creates jobs”?


The government does not “create jobs”; the private sector does that and, under Obama, it has been under attack with a vast increase in government regulations and policies that produce unemployment.


Is there “income inequality” in America? Yes, there always has been, but what Obama does not talk about is the “income mobility” that permits low income Americans to secure employment and higher wages when the economy is improving. It is another Big Lie from a President who is wedded to Marxist “solutions” that have never worked.

Is that even a fair representation for Obama to use? There was a lot of temporary jobs filled and as soon as Christmas was over those folks were laid off again...

Or am I looking at this wrong?

I see Obama's plan to destroy the U.S. economy is running on schedule, and by January 20,2017, the end of his Administration, the USA should be in the middle of the Super Depression.

@Fred. Yes, the Christmas temporary jobs are over. And jobs that are available have people camping out overnight to be first in line.

@Ron. I know you're being satirical, but it also reads as if you were congratulating Obama. But, yes, things will get worse over the next three years.

And therein lies a perfect platform for the Republican Party, and they need to hammer on these points over and over and over again from now until they win again!

Deana, what is it that I don't understand or that doesn't need explaining to those who don't?

Yes, my last comment was bitter satire, but can anyone doubt after five years in office that Obama's plan from Day One was to wreck the American economy?

I agree with you that in the next few years things are going to get much worse...much worse. I think both of us have predicted this would happen years ago.

...and they aren't likely to improve for many years after we have seen the last of Obama and his awful Administration.

The unemployment number is NOT bogus. It's calculated the same way it was in 1987 when I worked in unemployment. It's just that now it's politically expedient to call it bogus. It is what is always was. Always.
The number that matters is the Labor Participation Rate. So instead of calling something bogus that everyone cheerfully accepted until Obama as perfectly fine, maybe explain what rate does matter?

TAC, the methodology of the unemployment number needs a change, wouldn't you say? When it does not reflect the number of those actually unemployed, it simply serves a political purpose.

I think we are talking about the U6 number in the government stats, which is the most accurate count of unemployed - and I think the figure is up to 16%.

This is nearly THREE times the Administration/Lamestream Media number of 6.7% and sounds about right to me, as in the U1 number those who stop looking for work fall out of the U1 unemployed stats.

So I guess for the unemployed number to go down to zero, which would be totally acceptable to the Lamestream Media and the Obama Regime, we simply have to convince those diehard worker wanna-bes to stop looking for work.

Unfortunately, the ones who voted for Obama do not admit they were wrong to do so. They do the same blame game he does or they do not read or listen to competent informed people. Would like to utilize some of this article (With credit to Alan Caruba) in an upcoming Letter to the Editor. Our newspaper - The Independent Messenger does not get political, but will post Letters to the Editor. The area is low income, predominately African American and largely Democrat. Rarely do they experience the knowledge of the truth. Martha

This is on target and unfortunately the area I live in still have proud supporters of Obama. They are uninformed, undereducated and blind to the facts. They do the same blame game as Obama. Our local newspaper is non political, however, will print political Letters to the Editor. I would like to utilize part of this article in a Letter, giving credit to Alan Caruba. Thank you for an excellent, factual article. Martha

Alan: How would you revise the number? The Labor Participation rate is already in place. Do we estimate from those who went off unemployment only when it ran out (this is often when people bother to go get a job)? Do we do surveys to find out how many people gave up?

@TAC. Sorry, but I lack the expertise to answer your question.

Alan, I don't understand what you mean in the following:

"By June 2013, a record 23,116,928 American households were enrolled in the federal government’s Supplemental Nutrition Assistance Program—AKA food stamps—according to data released by the Department of Agriculture. That outnumbers the population of the entire Northeastern United States or those living in the entire Western U.S."

There are 38 million living in California, alone.

@James. Not all the households in CA are "enrolled" and the number refers only to those that are.

@James. Not all the households in CA are "enrolled" and the number refers only to those that are.

True, the number you gave refers to enrolled population, only, but the following does not make that distinction, which was my point:

"That outnumbers the population of the entire Northeastern United States or those living in the entire Western U.S."

Thanks for clarifying what you meant, though.