Watching Bill Clinton alternately stab Barack Obama in the back and then “apologize” afterward, all the time knowing that nobody will care or remember anything other than his typical double-dealing, reminded me of just how loathsome a whole generation of Democratic office holders have been.

It remains a mystery to me why “Bill” always seems to get a pass no matter whether he’s having sexual relations with a White House intern about his daughter’s age (“I did not have sex with that woman”) or lying to the special prosecutors, or pardoning a rogue’s gallery of criminals that included his own brother! When the Clinton’s left the White House they tried to take enough furniture to furnish their new digs. Hillary then set about to become Senator from New York and to later run for Bill’s old job.

With few exceptions, Democrat “leaders” get forgiveness for almost anything they say or do. The only unforgivable sin among Democrats is to tell the truth, thus straying from the Party line. Just ask Mayor Cory Booker.

The icons of the Liberal landscape always remind me of former Louisiana Governor Edwin Edwards who once told a reporter that the only thing that could keep him from being reelected was to be found “in bed with a dead woman or a live boy.” In 200l, after having served four terms on and off, he was sentenced to ten years in prison on charges of racketeering.

While Edwin Edwards was a charming rogue, another Edwards, a one-time candidate for Vice President of the United States, Sen. John Edwards was nothing more than an ambulance-chasing attorney and an adulterer who fathered a child while his wife was dying of cancer. Thanks to a mistrial, he walks among the free, but let us not forget the man who chose him to share the 2004 ticket, the equally loathsome John Kerry, a former Vietnam War protester who testified in 1971 that his fellow soldiers were guilty of war crimes and than tried to pass himself as a war hero!

Recall, too, Sen. Dick Durbin who, during the Iraq war, compared U.S. soldiers guarding Islamic terrorists at Guantanamo to Nazis.

These men are all Democrats and all Liberals.

In a sane world, men like these would never be elected to office, nor be reelected, but Clinton, Kerry, Edwards, and others have been routinely returned to power. Bill Clinton, of course, was subject to Constitutional term limits. The other exception was New York Congressman Anthony Weiner who was exposed for sending lewd photos exposing himself via the Internet. He was trying to strike up a relationship with some woman while his wife was pregnant! His constituents in a formerly heavily Democratic district replaced him with a Republican in order to get rid of the stench.

I half expect John Edwards to be offered an opportunity to host a television show like the former Governor of New York, Elliot Spitzer, otherwise known as “Client 9” of a prostitution ring and who resigned with his dutiful, betrayed wife by his side. Spitzer has since gone from the near moribund CNN to the depths of Al Gore’s TV channel, Current. 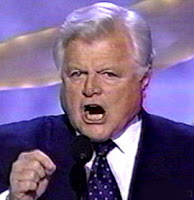 Al Gore rivals the late Sen. Teddy Kennedy for loathsomeness. After being defeated for the presidency by George W. Bush, Gore made millions off the global warming scam, but Kennedy will go down in history as the only Senator to survive the horrendous Chappaquiddick incident in which he swam to safety, leaving behind a young woman to drown in the car he drove off a bridge.

Kennedy, a notorious drunkard and womanizer, would go on to become known among Liberals as the "Lion of the Senate." After his death the citizens of Massachusetts replaced him with a Republican whose current political opponent, Elizabeth Warren, has been passing herself off as having Native American ancestry when there isn’t as shred of evidence to support her claim.

Other Liberals are those who show up whenever there is an opportunity to stir racial hatred; the Revs. Al Sharpton and Jesse Jackson. Sharpton’s career is strewn with the victims of his false allegations while in Jackson’s case there’s a mistress who gave birth to his child. He is famous for referring to New York City as “Hymietown.” Sharpton can be found these days hosting a show on MSNBC.

The fact is that these men have all, with the exception thus far of Weiner, been restored to what passes for respectability by Liberals. The mainstream media still treats them with a respect that conservatives of comparably bad behavior never receive, nor should.

The logical conclusion is that, for Liberals, morality has been replaced with their non-judgmental view of a world in which there is no good or bad, and no evil that cannot be justified in some fashion.

These are the kind of people who want to force the Catholic Church in America to toss aside its most fundamental beliefs in the sanctity of human life.

There has been much written about Obama, but he is already defeated and we are all just waiting for the November 6 election in order to remove him from office on January 20, 2013. It is sufficient to say that it is unlikely that he has uttered a single truthful sentence in his entire life, let alone while President.

Have there been some conservative miscreants? Yes, but they have been swiftly banished to anonymity, stripped of their official titles and powers. Therein lies the difference.

The good news, I believe, is that several generations of Americans have finally grown weary of the litany of Liberal mismanagement of the nation and its treasury, and as the recent failed Wisconsin recall election demonstrated, more and more people are saying “Enough!”

Great post Alan. Liberals get the 'out of jail for free' pass time and again. They somehow can re-write their history and expunge past records with no problem. The liberals, after all, live in their own Utopian world where all they need are some good feelings and to say the right things and all is forgiven. They are immoral and are bigots. However, just let a Conservative put a toe wrong and they pounce. They have no shame.

Excellent op-ed as usual, but I'm curious as the reason why political science experts such as yourself keep calling American patriots "conservatives" and anti-American national socialist traitors "liberals?"

Therefore, like many millions in this country, whether they care to admit it or not, I am a proud Tea Party member and Radical Republican engaged in a peaceful political civil war with the corrupt, degenerate and collectivist Establishment.

Ted Kennedy's real sin was that he stabbed his dead brothers in the back and embraced their enemies.