Canada Leads the Way on the Pipeline No-Brainer 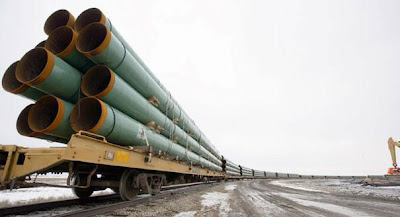 “Their goal is to stop any major project no matter what the cost to Canadian families in lost jobs and economic growth. No forestry. No Mining. No oil. No gas. No more hydro-electric dams.”

That was Canada’s Natural Resources Minister, Joe Oliver, speaking on January 9, 2012 and he might have been saying the same thing about special interests and the Obama administration in America. With refreshingly plain speech, Oliver criticized environmental organizations, both in Canada and in the U.S., saying they “threaten to hijack our regulatory system to achieve their radical ideological agenda.”

Canada is bringing common sense back into style. A June 3rd Washington Post article reported that “The government of Canadian Prime Minister Stephen Harper is rewriting the nation’s environmental laws to speed the extraction and export of oil, minerals and other materials to a global market clamoring for Canada’s natural resources.” Moreover, it has “added provisions to an omnibus budget bill that would revamp the way the government reviews the environmental impact of major projects, regulates threats to fisheries, and scrutinizes the political activities of nonprofit groups.”

What is instructive is the way Canada is now leading the way against the obstacles that the environmental organizations on both sides of the border have imposed on the development of energy and other sectors of the nation’s economy. The centerpiece of this development for the moment is the Keystone XL oil pipeline.

The Harper government has also proposed the repeal of the Kyoto Protocol Implementation Act, part of the global warming hoax that would require huge reductions in so-called greenhouse gas emissions. It is seeking changes to other federal laws such as the Fisheries Act, the Canadian Environmental Protection Act, and Species at Risk Act.

Also under scrutiny is the proper role of non-profit organizations and “charities” that engage in blatant political activities. In typical fashion, the Sierra Club website on Monday claimed that Harper is trying to “steal tax-exempt status from charities that stand up to Big Oil.” Another environmental organization, Friends of the Earth, devotes its website to efforts to block the construction of “the southern leg of the Keystone XL pipeline from Oklahoma through Texas to the Gulf Coast.”

Every effort in the United States to ensure the provision of energy, whether from coal, oil, natural gas or nuclear power, continues to be assaulted by the huge environmental propaganda machine that currently sees the defeat of the pipeline as crucial to its anti-energy agenda.

On January 18, Americans were astonished to learn that President Obama had formally rejected a bid by Canadian energy company, TransCanada, to build a $7 billion oil pipeline that would link the tar sands of Alberta to refineries on the Gulf of Mexico. In a time when the U.S. economy is suffering loss of jobs, the project would normally be a no-brainer.

However, opponents of the pipeline are a virtual who’s who of environmental organizations and a torrent of lies has poured forth from them regarding the project. The American Petroleum Institute estimates it will create 10,000 U.S. jobs next year with an anticipated 45,000 jobs by 2015 and close to 85,000 by 2020.

Among the lies put forth by militant environmentalists is that the environmental impact studies and securing the permits necessary for the pipeline were “rushed.” In truth, it took three years, four months, and five days up to the day TransCanada first filed the permit request to begin construction.

Obama repeated this lie, blaming Republicans for preventing “a full assessment of the pipeline’s impact, especially the health and safety of the American people, as well as our environment.” The Obama administration had, in fact, reviewed more than 10,000 pages of environmental studies and the State Department had twice concluded that all requirements had been met!

By contrast, in 1974, the TransAlaskan Pipeline was approved by Congress in just about a year and it was built in less than three years despite being more environmentally and technically challenging.

Congressional Democrats and Republicans have been so angered by the president’s decision against the pipeline that in mid-April the House passed a short-term transportation bill that would facilitate the next stage of the oil pipeline. The bill passed 293 to 127, with 69 Democrats supporting it. It was the fourth time the House had passed a measure to expedite the stalled project, one of which failed in the Senate by a narrow vote when the president personally lobbied some Democrats to vote against it.

Let’s tip our hat to the Canadians who have concluded that environmental lobbies, think tanks, and charities are doing more to harm Canada’s interests by means of the environmental treaties and laws they have worked so hard to impose on that nation and ours. We Americans could learn a valuable lesson from our neighbors to the north.

Just an aside, they are not tar sands - that's the term the enviros use. They are oil sands or, if you prefer, bituminous sands.

Thank you. I shall not refer to them as "tar" sands henceforth. Typically, the Greens find some ugly name to hang on anything they dislike.

Canada leads the way in energy production because the voters up there have rejected socialism and installed a rational and patriotic government.

America gets her chance this November, and if the recent rejection of socialism in its formerly Red Homeland of Wisconsin is any indication, the mantra of 2013 will be: