Black Tuesday, October 29, 1929, marked the beginning of the Great Depression, but for Barack Obama, last Friday was Black Friday because the U.S. Department of Labor announced that only 69,000 jobs were added in May, well below expectations that it might reach 150,000. The official unemployment rate ticked up to 8.2 percent, but it is actually far closer to 15 percent.

The news means that Obama’s hope of being reelected ranges between slim to none. Beyond the current numbers, on Friday CNS News reported that 766,000 more women are unemployed than when he took office in 2009.

Also on Friday, Generation Opportunity, a non-profit, non-partisan organization devoted to younger Americans reported that unemployment among young adults, ages 18 to 29, was 12.1 percent in May. “The declining labor participation has created an additional 1.7 million young adults that are not counted as ‘unemployed’ by the Bureau of Labor Statistics because they are not in the labor force, having given up looking for work.” If their numbers were factored in, “the actual 18-29 unemployment rate would rise to 16.9 percent.”

On Thursday, Obama got more bad news. Former President Bill Clinton told CNN that Mitt Romney’s business record at Bain Capital was “sterling.” Clinton said, “I don’t think that we ought to get into the position where we say ‘This is bad work. This is good work.’ The man who has been governor and had a sterling business career crosses the qualification threshold.”

Clinton’s appraisal came at the end of the third week that Team Obama had been trying to demonize Romney for having been a successful venture capitalist. Clinton isn’t the only prominent Democrat to jump off the SS Obama. Newark Mayor Cory Booker and Massachusetts Gov. Deval Patrick also refused to press the Obama attack on Bain. 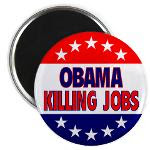 Obama has little with which to campaign upon. When Karl Rove, Bush’s former White House advisor, examined “Obama’s Public-Equity Record” in a May 10 Wall Street Journal column, he noted that the Obama administration had forced General Motors and Chrysler into bankruptcy and, instead of allowing the process to proceed normally, the Obama bailout cost jobs.

GM and Chrysler creditors were left without compensation while Obama ensured that the United Auto Workers Union gained ownership equity in both companies. Then he stood by “as the UAW forced the closure of a plant in Moraine, Ohio, where workers had joined a rival union.”

By almost any economic measurement the nation is experiencing, if not a Depression, at least a very serious Recession, despite the official pronouncement that it had ended in 2010. The Recession hitting European nations is having global repercussions as well.

Obama has had nothing to say about the pending “Taxamageddon” that will kick in on January 2013 bringing the largest tax hike in the history of the nation. He never mentions the “stimulus”, nor Obamacare. The latter is likely to be ruled unconstitutional by the Supreme Court in June.

Even members of the mainstream press that were largely responsible for Obama’s election in 2008 are beginning to have second thoughts. Dana Milbank of the reliably liberal Washington Post in April wrote that Obama “is making me queasy because his nonstop campaigning is looking, well, sleazy—and his ad suggesting that Mitt Romney wouldn’t have killed Osama bin Laden is just the beginning of it.”

The polls are all trending away from Obama. On almost every issue, Romney has either tied or surpassed him. Obama looks weak because he is weak.

Many of them are voters.

It's all falling apart for Obama and reminds me of the last scenes of Richard III by Shakespeare, where the courtier after courtier run to the king to report defeat after defeat that will seal his doom.

This good news is offset by the bad news that the nation and the world economies seem to be in a death spiral ending in the almost inevitable Second Great Depression.

One wonders if this was not the Obama regime's endgame all along - Crash and burn the USA economy with the idea that communism would rise from the ashes.

The default position for ruined economies is capitalism.

I would like to recommend everyone read Brian Sussman’s book Eco-Tyranny. He outlines the history of the green movement and its beginnings with Karl Marx.

As you read this book you will see a pattern that everyone will find familiar today and with what went on with the Progressive Movement promoted by Teddy Roosevelt, Woodrow Wilson, FDR, Nixon, the Bush's and every president with the probable exception of only three; Harding, Coolidge and Reagan. This is a must read book!

Remember that environmentalism and progressivism isn't about protecting the environment or promoting justice for society. It’s all about destroying personal rights in favor of an all powerful central government.

The beginning of that started many years ago by working to eliminate property rights by environmental activists and turning massive acerage to the federal government.

The right to own property is one of the reasons Marx hated the United States so much. The other one was the right to pursue happiness.

Property rights! That is the key to everything that is going on.