Obama's Killing the Economy One Day at a Time 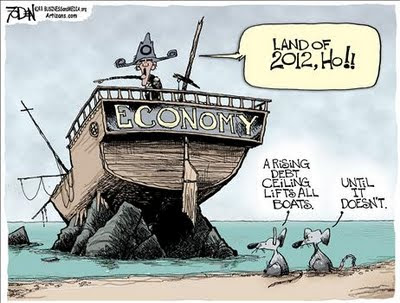 A theme I have returned to over the past three years is my view that President Barack Hussein Obama is a moron. A big part of me wants to attribute his decisions to ignorance, but another part sees a thoroughly malevolent ideology directing those decisions. I don’t think he likes America or Americans.

The world these days is a very unhappy place. In Western nations, Europe and the United States, there has been so much profligate spending and so many “entitlement” programs that financial structures are beginning to crack like poorly maintained bridges or dams.

The Democrats, led by Obama, Senate Majority Harry Reid, and former House Speaker, Nancy Pelosi, have supported the destruction of Medicare with Obamacare which is now wending its way through the courts with 26 States joined in opposing it. In this and so many other ways this trio, supported by party linevotes has created an environment of fear and uncertainty that is playing havoc with the economy.

Millions of Americans are waking up to the fact that the Federal Reserve, despite being authorized in 1913, is a central bank with its own agenda and not even subject to a congressional audit. As was the case leading up to the Great Depression of the 1930s, its policies are contributing to the current financial crisis. This week Wall Street listened to Fed Chairman Ben Bernanke’s outlook on economic growth and stock prices took a dive.

All of the Obama administration’s economic policies have proven to be models of stupidity and three years on from Obama’s 2009 inauguration, every single element of the economy is in the toilet.

A June 8 opinion by Martin Feldstein, published in the Wall Street Journal, was titled, “The Economy is Worse Than You Think.” Like the 1960’s robot on TV’s “Lost In Space”, Feldstein and a legion of economists are shouting, “Danger, America, danger!”

Is anybody surprised that every one of Obama’s original economic advisors except for Tim Geithner at Treasury has left for the ivory towers from whence they came? With tenured jobs waiting, they are secure even if the rest of us are not. Geithner came from the ranks of the Federal Reserve and that is hardly a recommendation these days.

To provide you with just one example. You have to be stupid to cling to a completely debunked “global warming” hoax whose real purpose was to create a new source of wealth for people like Al Gore via the sale of “carbon credits.” These are permission slips to emit carbon dioxide (CO2) while producing energy, such as utilities, or using it to manufacture and produce virtually everything from steel to the local baked goods.

The problem for those advocating carbon credits is that there is no global warming. A new cooling cycle began in 1998 and the Earth has been cooling ever since. The Mississippi River flooding is the result of melting snow from a winter that produced record amounts. Future winters will become more extreme and last longer because that’s what happens when the Earth cools.

Not only is the Earth cooling, as it did from 1300 to 1850 in what is now called the “little Ice Age”, but CO2 has nothing whatever to do with the climate. It comprises 0.038% of the atmosphere. Manmade CO2, deemed the culprit because it is the result of burning fossil fuels, oil, gas, and coal, for energy, has nothing to do with climate. The primary factor was and is the Sun. It has been that way for 4.5 billion years.

So why do we read that the Obama administration’s Department of Agriculture has spent $17.4 million “to explore market for carbon credits”? Why is the administration still fixated on a Cap-and-Trade bill they say will reduce CO2 when it is not a problem? Somebody is still looking for a big payday, but the rest of us have just seen $17.4 million of our money flushed down the Green toilet.

The problem here is that the Chicago exchange that was set up to cash in on the CO2 cash cow has folded and the ones in Europe have collapsed as well. Agriculture Secretary Tom Vilsack may want to establish an American carbon market, but having already wasted millions toward this objective, someone needs to tell him to stop.

That someone would normally be the President, but our President is not normal. He is a pathological narcessist and liar.

In the past three years, Obama has doubled the national debt, often with “stimulus” bills that stimulated nothing.

Obama’s Gulf of Mexico “permatorium” has put 87,000 workers in the oil industry out of work with a moratorum on drilling permits that courts have twice declared illegal, but which continues to this day.

Americans have been forced to witness a succession of short-term, quick fixes to the economy that have fixed nothing and made things worse. That’s a pretty good definition of stupidity.

And once again, a short, simple sentence says it ALL...

Has there been an increase in carbon dioxide and other greenhouse gases in the atmosphere? Yes. What they haven`t told you is that it has only increased a tiny amount. They`ll show you a graph of increaseing carbon dioxide that looks like the slope of Mount Everest or a hockey stick. But here`s the reality. Carbon dioxide has only increased from 316 parts per million to about 376 parts per million. Sixty parts PER MILLION is the total increase. Now, that is such a small change in our entire atmosphere that it is hard to imagine. How can we visualize that?

Imagine the composition of the Earth`s atmosphere as a football field. Most of the atmosphere is nitrogen. So, starting from the goal line, nitrogen takes you all the way to the seventy - eight - yard line. And most of what`s left is oxygen. Oxygen takes you down to the ninety - nine - yard line. Only one yard to go. But most of what is left is the inert gas argon. Argon brings you to within three and a half inches of the goal line. That`s pretty much the thickness of the chalk stripe. And how much of that remaining three inches is carbon dioxide? One inch. That`s how much CO2 we have in our atmosphere. One inch in a hundred - yard football field.

Now ladies and gentlemen, you are told that carbon dioxide has increased in the last 50 years because of industrialized nations. Do you know how much it has increased on our football field? It has increased by three-eighths of an inch - less than the thickness of a pencil. It`s a lot more carbon dioxide, but it`s a minuscule change in our total atmosphere. Yet you are asked to believe that this tiny change has driven the entire planet into a dangerous warming pattern.

Not only is Obama a moron, he's a African Dictator Style Marxist Moron whose goal is the destruction of the United States of America.

Hence, Obama is the "Forrest Gump of Democrat Party" with the plot change that everything he does causes poverty and depression,as opposed to Gump's ability to make himself and everyone around happy and wealthy without really trying.

Alan said, "Americans have been forced to witness a succession of short-term, quick fixes to the economy that have fixed nothing and made things worse. That’s a pretty good definition of stupidity."

Actually it's the definition of socialism, which to the educated layman appears to be a form of collective sanity.

Stupid is as stupid does. The country is divided between Sheeples who are expecting either candy or a pony, and the others who see a paralyzed economy and everything that it brings: joblessness, stagflation, and as the Siamese king once said, etc., etc., etc.

I wore my hair in a ponytail when it was not in fashion - then everyone started wearing ponytails.

I wore a goatee when they were not in vogue - then everyone started growing them.

I've said that Barack Obama is a MORON for years on end.

I must be a trendsetter.

Since Obama arrived at the tail end of all of this the blame must go to the source, that takes us back to the Reagan era and supply-side economics. Bush however, spent money like water, did nothing to preserve the regulation of business and then there are the wars. Gee, where might the blame be properly assessed? I may not like Obama's choices in his attempt to bail out the economic instability but I do think it's been an honest attempt to save us from complete collapse.

Just admit you hate having a black man as president and it will save up all the trouble of lying!

@StrawSoul: Playing the race card will not work here. Obama's decisions after three years in office have done nothing to improve the economy.

For the record, I don't hate having a black man as President.

I do, however, hate having a STUPID man as President. His race doesn't have anything to do with it.