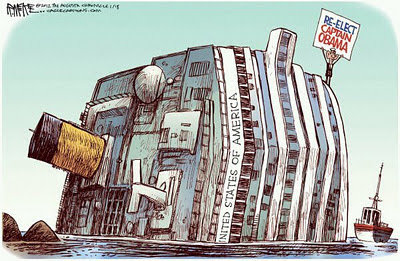 One could make a very long list of reasons why Barack Obama will lose in the November election. Here’s a short list why Obama has already worn out his welcome among the majority of Americans, including some of those who formerly supported him.

As Obama delivers his State of the Union speech on Tuesday, his theme will be “economic fairness”, but more net jobs have been lost on his watch (1,663,000) then any previous president going back to Harry Truman, none of whom presided over such an economic disaster.

1. Blamed all problems on George W. Bush, not the Democrats who had controlled both chambers of Congress since January 3, 2007 until 2010 when the Republicans gained control of the House.

2. Obamacare: challenged by 28 States as unconstitutional, subject of a Supreme Court hearing in March.

6. Admitted there were no “shovel-ready jobs.”

8. Appointment of White House policy “Czars”, one of whom was a Communist.

10. Mishandling of BP oil spill; slow to react, shut down all drilling in Gulf of Mexico.

12. Bowing to the King of Saudi Arabia.

13. Stopped the building of the XL Keystone pipeline. Has opposed offshore and domestic oil drilling

15. The “Fast and Furious” gun-running scandal.

21. Increased federal debt more than all Presidents from Washington to Clinton combined.

22. Highest long-term unemployment since the 1930s.

26. Refused to support the Defense of Marriage Act.

27. Wanted to shut down Guantanamo.

28. Has expressed hostility to banking sector, pharmaceutical companies, physicians, coal industry, oil industry, and other sectors of the economy.

29. Attempted to stop Boeing from building a manufacturing unit in South Carolina.

34. Questions exist about whether he is a “natural born” citizen as required by the U.S. Constitution.

And Obama gives little indication that he likes America, its values, its history, its military, and its role in the world.

I could go on, but voters who ignore any or all of these factors, keeping Barack Obama in office for another four years, would doom the nation to a Third World status, to default, and the end the greatest experiment in freedom and liberty the world has ever known.

You forgot to mention that he's a MUSLIM PSEUDO CHRISTIAN LIAR! Not only that, but there's growing evidence that he is the anti-Christ. Just look at the signs. He's leading America down a moral sewer from which we will never return. Welcome to the Socialist States of Obama!

Can't disagree with so much as one word.

@Lime. No, I didn't forget, but I didn't want to make the list too long.

This is also a reason why ALL of congress needs to go too. None of them has tried to stop these repugnant actions. Add the evisceration of our bill of rights with the NDAA passage by dems and reps and you see why all need to go.

You have hit the nail on the head, but unfortunately there are too many Americans that have been programmed via the mass media to love all that is wrong and hate all that is right. Not to mention the fact that almost 50% of Americans get some kind of government welfare, I really don't expect these people to cut themselves off the gravy train just to do the right thing.
I pray that I am wrong, but after watching this government run roughshod over the constitution, completely violate peoples rights at the hands of the TSA, monitoring the internet, and flat out ignoring the will of the people, it is indeed a difficault thing to have a positive outlook on the future of this country.
Agreed, Obama is the worst president in the history of this country and he is residing over the destruction of the union, he is not the only one. Just look at how the media have whored themselves out to the marxist cause in this nation, a congress and a senate that CANNOT nor WILL NOT govern, among countless other causes. Obama is just the lightning rod, there are an incredible amount of others who wish this country ill and will do anything it takes to destroy us.

Most of the hatred from the Right is because they cannot deal with a black president. The Republicans wont even admit his legitimacy as President or say "our" President. Racism is so evident because there is no other reason for their behavior towards him. They make it so clear in his last two State of the Union addresses when Wilson shouts﻿ "Liar" during speech and last night Colorado's Lamborn refused to show up. Never seen this in my lifetime toward a Prez.

@Soul: This is just total BS. If racism was a factor he would never have been elected...and you know it.

If anything opponents of Obama have gone out of their way to avoid any suspician of racism.

Any number of black political sites, however, have not hesitated to criticize him in the context of race.

Now that's a tape measured homerun if there was ever was one. You knocked it out of the park Alan.

That said, I have never seen so many mentally challenged college aged students so enamored with this man. You can beat them over the head with the truth and it's no use.........it's still ALL GEORGE BUSHES FAULT! Talk about giving you chest pains.

you forgot he's for gay marriage.
I think that's a big one for many americans.

Ha! He only came out in support for gay marriage because he knows it is going to be a extremely tight race in November. It's all about being reelected. If you believe that Obama truly supports gay marriage, than he is a better liar than I gave him credit for, or you are the dumbest person in the world.

Go see the movie 2016...it will leave you numb...it explains everything perfectly and clears your mind to move for the truth and fight to win our great nation back. My Dr and I talked about this subject for an hour today..I told him to see 2016...he said he was going tonight...he said that Drs will be government employees and that they have been told to cut services ie tests-treatments-even if medically necessary...I told him silly people were concerned that Romney is a Mormon...he gasped and exclaimed 'A mormon? This man { pres} is a Communist!