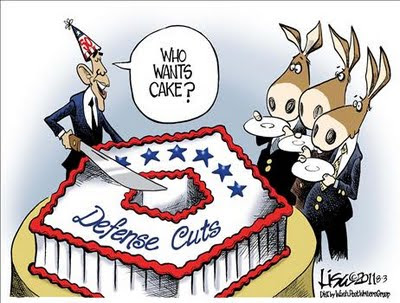 “Si vis pacem, para bellum.” If you want peace, plan for war. The adage is attributed to the 4th or 5th century Latin author Publius Flavius Vegetius Renatus’s tract De Re Militari book 3. This fundamental wisdom is being ignored by President Obama, one of two recent Commanders-in-Chief who never spent a day in uniform, let alone under fire.

In a recent American Thinker commentary by Jim Yardley, he said, “It is apparent that the president, in developing his strategy, used the same extensive knowledge, his superior intellect, and worldly wealth of experience that he brought to his strategy for his $800-billion stimulus, his strategy for providing cost-free health care to millions of Americans, and his strategy for using ‘smart diplomacy’ to defuse not spots around the world.”

Perhaps receiving the Nobel Peace Prize barely months into his first year as President has convinced Obama that he is the man to get all our enemies to join hands and sing Kumbaya. Obama accepted the prize that has gone to other seekers of peace like Yassir Arafat, founder of the Palestinian Liberation Organization or co-winners, the Intergovernmental Panel on Climate Change and Al Gore. The IPCC and Gore have led the greatest hoax of the modern era, global warming, and Arafat rejected every effort at peace offered by Israel by going back on his word and using terrorism to achieve his goals.

There is no question that the announced cuts to the U.S. military budget are, in part, the result of the domestic run up of debt and borrowing the followed the financial crisis of 2008; itself the result of bad government policies regarding the wholesale granting of mortgages to people who could not afford homes, then bundling those bad mortgages and selling them as assets to the banks.

While the economy is showing some small signs of regaining its footing, the government is still borrowing forty cents of every dollar it spends and has shown no real intent to reduce spending.

While this is occurring we have a President who has made clear his antipathy of the role of the military. A recent Wall Street Journal editorial noted that “The Pentagon shouldn’t be immune to fiscal scrutiny, yet this Administration has targeted defense from its earliest days and has kept on squeezing. The White House last year settled with Congress on $450 billion in military budget cuts through 2012, on top of the $350 billion in weapons programs killed earlier,” adding “Taken altogether, the budget could shrink by over 30% in the next decade.”

Following a 1993 attempt to destroy the World Trade Center Osama bin Laden, a still largely obscure Islamic fanatic, declared war on the United States in 1996. In 2001, al Qaeda succeeded, killing nearly 3,000. To underestimate the intent of his successors to destroy the nation would be a grave error. To think that his assassination along with the killing of a relative handfull of other al Qaeda leaders has ended the threat is wishful thinking.

To think that the withdrawal of U.S. troops from Iraq will not at some point result in the possible breakup of that nation or the withdrawal from Afghanistan will rid us of the threat of Islamic fanaticsim is still more wishful thinking.

Right now and ever since 1979, the threat of Iran is the largest facing the Middle East and the West. Its leaders have never made a secret of its intent to acquire nuclear weapons, to threaten all other Middle Eastern nations, as well as Europe and America is on a par with the threat the rise of Nazism posed in Germany in the 1930s.

After World War Two, America emerged as a superpower and it took on the role of global policeman. No military prescience predicted the attack on South Korea by North Korea, nor was our strategy in Vietnam successful. We had earlier failed to anticipate the 1941 attack on Pearl Harbor despite efforts to keep out of the war that had begun in 1939.

The lesson that should have been learned is that overwhelming military strength contributes greatly to avoiding wars.

President Obama is ignoring that. It is not, however, to say that he is taking Iran lightly. In early January, thousands of U.S. troops were deployed to Israel and senior U.S. military sources say they anticipate they will remain through the year. Obstensively, they are there to participate in joint U.S.-Israeli war games. They will be joined by a U.S. aircraft carrier and, as we know, we have a task force in place in the event the Iranians try to close the Strait of Hormuz through which passes one sixth of the world’s oil supplies.

The U.S. could be energy independent in a decade if the Administration and Congress would remove the obstacles to accessing our enormous reserves of coal, oil and natural gas, but that remains unlikely as this is written.

The decision to reduce the size of our military to 490,000 troops from 570,000 could not come at a worse time. Air and naval assets, we’re told, will be maintained. Holding evacuated or captured territory requires “boots on the ground.” The decision of former President Bush to “surge” in Iraq by increasing troop strength turned a potential defeat into a success. A war-weary America and the current Iraqi regime wanted us out and we are out.

Meanwhile Egypt that underwent “the Arab Spring” has fallen into the hands of a militant, anti-American and anti-Israel Muslim Brotherhood. Turkey has joined the Islamic frenzy, the future of Syria remains unknown, so anyone who thinks that military action anywhere, but especially in Iran, is not a real potential is not paying attention.

President Obama’s claim that “the tide of war is receding” is likely to rank with British PM Neville Chamberlains claim of “peace in our time” after a visit with Hitler.

It is wishful thinking or worse. It is the deliberate effort to ignore the dangers in the world. Shifting military personnel and assets to Asia acknowledges China’s rising power, but U.S. military leaders have warned against a war in Asia for decades. It is doubtful the Chinese want one.

What is not in doubt is that this is the wrong time to reduce our military strength and capabilities. We did that after World War One and paid a price for it. President Obama’s policies put us in the same peril.

Obama is playing cards with National Security to redistribute funds into areas of greater concern to him. He is not looking to cut spending. He considers Military spending cuts access to easy-money. Perhaps there are a few nice renewable energy projects coming up that need an infusion of taxpayer dollars so they can payout contracted bonuses before they declare bankruptcy. I don't know. But what I do know is that this man thinks he knows better than anyone what to do to improve his standing as the American Messiah. It that were true, he would resign immediately.

Don't worry, be happy in the knowledge that our national security is being guaranteed by the likes of the Occupy Movement-endorsed national leaders, Debbie Wasserman-Schultz, Joe Biden, Maxine Waters and disciples of Bill Ayres.
Sleep well.

WAKE UP YOU FAIR WEATHER CITIZENS, AMERICA'S DAYS AS YOU KNOW IT ARE NUMBERED!

Having said that ... If this were not true, we wouldn't be having this converation NOW OR EVER!