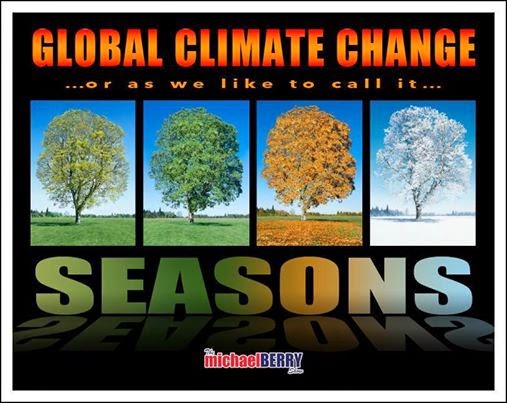 
From July 7 to 9, the ninth International Conference on Climate Change will convene in Las Vegas in a dramatic demonstration that “global warming” was a huge hoax and the claims that “climate change” is responsible for everything are a continuation of that fraud.


As a policy advisor to The Heartland Institute, a Chicago-based free market think tank, I attended its first climate change conference held in New York in 2009 to dispute the “science” advancing global warming.  I have been writing about the hoax that gained momentum since James Edward Hansen testified before congressional committees in 1988. From 1981 to 2013 Hansen had been the head of the NASA Goddard Institute for Space Studies.


Along with other government agencies like the National Oceanic and Atmospheric Administration, NASA has been producing data that routinely tampers with climate statistics to maintain the hoax that gained an international platform with the creation of the United Nations International Panel on Climate Change (IPCC) in 1998.


In June a Pew Research Center poll announced that 35% of Americans say there is not enough solid evidence to suggest mankind is warming the Earth while another 18% says the world has warmed due to “natural patterns” and not human activity. That’s a total of 53% who disagree with the lies about climate change being told by President Obama and a host of politicians and scientists who have received millions to maintain the hoax. The poll also noted that 40% of Americans still believe that mankind is causing the planet to warm. They likely represent the cohort that has graduated from American schools whose curriculum has taught the Al Gore version of science.


Among the participants in Heartland’s 9th conference are Habibulio Abdussamatov, a Russian astrophysicist; Sonya Boehmer-Christiansen, a research analyst from Great Britain; Fred Goldberg, an associated professor at the Royal Institute of Technology in Stockholm, Sweden; Madhav Khandekar, a research analyst from Environment Canada; William Kinimonth who worked with the Australian Bureau of Meteorology for 38 years; and Lord Christopher Monckton, Viscount of Brenchley, a chief policy advisor to the Science and Public Policy Institute. They will be joined by American scientists, longtime skeptics of the hoax, often called “deniers” by those advocating it.


It is doubtful that the U.S. media will give much, if any, news coverage of the conference, but the eight previous conferences have done much to debunk and dispel the deluge of lies about the Earth’s climate.
﻿Leading Heartland has been its president, Joseph Bast, who asks “How can there be a ‘scientific consensus’ on the causes or consequences of climate change when thousands of scientists, economists, and policy experts attend conferences devoted to expressing the opposite theme, that the science is still unsettled and climate change is not a crisis?” In May Bast was joined by research scientist, Roy Spencer, in a Wall Street Journal commentary that debunked the lie that 97% of scientists support climate change, noting that “surveys of meteorologists repeatedly find a majority oppose the alleged consensus.”


Heartland has been a sponsor of the Non-Governmental Panel on Climate Change, a rival to the UN’s IPCC that continues to issue reports filled with claims of climate-related threats to mankind. The Obama administration recently released its National Climate Assessment echoing the IPCC claims, blaming all climate events on humankind. Common sense tells us that that events like Hurricane Arthur are natural and reflect the 4.5 billion year old Earth’s ongoing and ever-changing climate cycles.


Indeed, the Earth has been in a cooling cycle for seventeen years, something the climate change advocates are calling “a pause” in their global warming claims. Unknown to most Americans is that the Earth is at the end of its 11,500 year old interglacial cycle, suggesting that we are all in for a new ice age.


The global warming/climate change hoax is rooted in the claim that “greenhouse gases”, primarily carbon dioxide (CO2) has caused the warming that is not occurring. Ironically, CO2 continues to accelerate in the atmosphere and, rather than a cause for concern, represent very good news for every piece of vegetation from crops to forests as it is as vital to their existence as oxygen is for humans and all other animals. The Earth has had periods when its presence was much higher.


The conference expects to draw several hundred attendees this year, but those who want to follow its panels, lectures, and discussions can do so via the Heartland website that will live-stream them. It can be followed as well via Twitter @HeartlandInst and on Facebook at Facebook.com/Heartland using the hashtag #ICCC9. Heartland will post the sessions on its YouTube page after the conference ends.


We all owe a debt of gratitude to the skeptics who have courageously disputed the global warming/climate change hoax and to The Heartland Institute that has provided a platform for them to gather to continue their efforts to educate a public that has been deluged by a massive deception.