The EPA Thinks You're Stupid 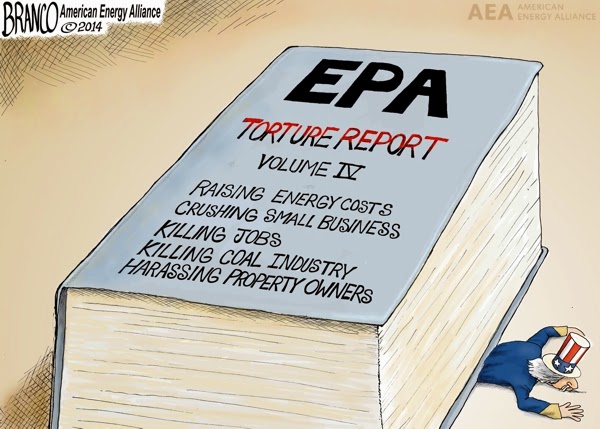 
The folks at the Environmental Protection Agency, starting with a long line of its administrators that now includes Gina McCarthy, think you and the Congress of the United States are stupid. They have been telling lies for so long they can’t imagine that their chokehold on the American economy will ever end.


It is, however, coming to an end and the reason is a Republican-controlled Congress responding to the countless businesses and individuals being ravaged by a ruthless bureaucracy driven by an environmental agenda determined to deprive America of the energy sources vital to our lives and the nation’s existence.


This was on display in early March when Gina McCarthy testified to the Senate Environmental and Public Works Committee, asking for a nearly $500 million increase in its 2016 budget. The total discretionary budget request would have topped out at $8.6 billion and would reward states nearly $4 billion to go along with the EPA’s Clean Power Plan.


The problem is that the Clean Power Plan is really about no power or far more costly power in those states where the EPA has been shutting down coal-fired plants that not long ago provided fifty percent of all the electricity in the nation.


In February 2014, the Institute for Energy Research reported:


“More than 72 gigawatts (GW) of electrical generating capacity have already, or are now set to retire because of the Environmental Protection Agency’s (EPA) regulations. The regulations causing these closures include the Mercury and Air Toxics Standards (colloquially called MATS, or Utility MACT), proposed Cross State Air Pollution Rule (CSAPR), and the proposed regulation of carbon dioxide emissions from existing power plants.


Over 94 percent these retirements will come from generating units at coal-fired power plants, shuttering over one-fifth of the U.S.’s coal-fired generating capacity. While some of the effected units will be converted to use new fuels, American families and businesses will pay the price with higher utility bills and less reliability for their electricity.”


What nation would knowingly reduce its capacity to produce the electricity that everyone depends upon?
Answer: The United States of America.
Why? Because the EPA has been telling us that coal-fired plants produce carbon dioxide (CO2) and it is causing ours and the world’s temperature to increase to a point that threatens our lives. They have been claiming that everything from blizzards to droughts, hurricanes to forest fires, are the result of the CO2 that coal-fired plants produce.


That is a huge, stupendous lie.


In the Senate Committee meeting, McCarthy said, “Climate change is real. It is happening. It is a threat. Humans are causing the majority of that threat...the impacts are being felt. Climate change is not a religion. It is not a belief system. It’s a scientific fact. And our challenge is to move forward with the actions we need to protect future generations.”


Climate change is real. It’s been real for 4.5 billion years and it has absolutely nothing to do with anything that humans do, least of all heating, cooling and lighting their homes, running their businesses, and everything else that requires electricity.


McCarthy said that the EPA’s overall goal was to save the planet from rising sea levels, massive storms, and other climate events that impact our lives. No, that’s not why the EPA was created in 1970. Its job was to clean the water and the air. It has done a relatively good job, but its mandate had nothing to do with the climate, nor does the provision of energy have any impact on the climate.

The reverse is true. The climate has a lot of impact on us.


Regarding the “science” McCarthy referred to, according to a 2013 report by the Intergovernmental Panel on Climate Change, there were record low tornadoes, record low hurricanes, record gain in Arctic and Antarctic ice, no change in the rate of sea levels, and there had been NO WARMING at that point for 17—now 19—years.


When Sen. Jeff Sessions asked McCarthy a number of questions about droughts and hurricanes, she either dodged providing a specific answer or claimed, as with hurricanes, that “I cannot answer that question. It’s a very complicated issue.”


Asked about the computer models on which the EPA makes its regulatory decisions, McCarthy replied, “I do not know what the models actually are predicting that you are referring to.” Sen. Sessions said that it was incredible that the Administrator of the EPA “doesn’t know whether their predictions have been right or wrong.”


As for any “science” the EPA may be using, much of it is SECRET.

H. Sterling Burnett, the managing editor of the Heartland Institute’s Environment & Climate News, reported on The Secret Science Reform Act (HR 4012) introduced by the House Science Committee late last year. The bill would “prohibit the Environmental Protection Agency from proposing, finalizing, or disseminating regulations or assessments based on science that is not transparent or reproducible.”


The House passed the Act on November 20, 2014 and it has been received in the Senate, read twice, and referred to the Committee on Environment and Public Works. If it passes the Senate, that will be a giant leap forward in gaining oversight and control of the EPA.


Until then, the EPA’s administrator and staff will continue to work their mischief in the belief that both Congress and the rest of us are stupid. We’re not.

Congress has the power of the purse. They should cut off their funds and shut the EPA down!

Dr. Jay Lehr is the science director of the Heartland Institute. He's also one of the founders of the EPA. He's convinced the EPA is out of control and hasn't done anything worthwhile since 1980, so he's outlined a plan to replace them in five years. Please view that plan here.

I wonder if the eclipse or abolition of large institutions is a bad thing in most cases. Whether the EPA or Australia's CSIRO are in question, it's worth asking if the advantages of continuity, understandably substantial, aren't outweighed by what we might call Byzantium syndrome.

Things get old and are meant to crumble before they take the light and nutrient from new life. Bureaucracies - and "iconic" industries and banks "too large to fail" - are exempted for some reason from these natural processes which apply to old trees, old sandwich shops or old footy clubs.

Did planes stop flying when Pan-Am stopped flying? Do I need Polaroid to point a small Sony phone at a photographic subject?