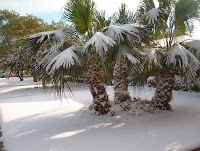 Sen. Barbara Boxer (D-CA), chairwoman of the House Environmental and Public Works Committee, has pledged to “follow science” when it comes to drafting legislation and one of the first new laws she wants passed is one that would impose a cap-and-trade limit on greenhouse gas emissions in order to avoid the dreaded global warming that is NOT happening.

I must confess I am always perversely impressed with the ability of politicians to lie through their teeth, be obscenely ignorant, and do both at the same time. The problem for politicians and the environment organizations is that the real science of climatology and meteorology can be very annoying.

According to Sen. Boxer, “The surest way to create good jobs in this country is to mobilize for clean energy” (wind and solar). What California needs is real jobs, not green ones, but considering how spectacularly mismanaged its budget has been under the current green Governor, it’s a wonder that Sen. Boxer can say such things with a straight face.

“The whole world,” says Sen. Boxer, “is doing cap-and-trade, so we need to be consistent.” Oh yeah? Well, China isn’t doing it. India isn’t doing it. It’s not being done throughout Africa or most of Asia. A handful of European nations that signed onto the UN Kyoto protocol have tried it and they are trying to find a way out because cap-and-trade is a great way to weaken businesses and industries by sucking money away from their need to compete and grow.

Capping greenhouse gas emissions and trading “carbon credits” (the business that Al Gore happens to be in) to avoid a global warming that is NOT happening is criminally stupid.

Based on the notion that carbon dioxide and humans are the driving force behind global warming, it ignores the fact that CO2 is 0.0038 of the Earth’s atmosphere and six billion humans exhale CO2 daily. Do humans change the climate? Or does the Sun have something to do with it? Oceans, too. And clouds!

Meanwhile, on February 5, Greenpeace will release the results of a “carbon footprint analysis on the economic recovery package” via a teleconference whose participants will assert that “global warming will create a major drag on the U.S. and world economies…” No, it is all those idiotic UN environmental treaties that do that. And, again, there is NO global warming.

All this talk of “green jobs” ignores the fact that the more than a half million job losses that have been announced in recent weeks have nothing whatever to do with the environment. If you have lost your job with Home Depot, Starbucks, Microsoft or Caterpillar the last thing on your mind is global warming or the environment. You weren’t laid off because the Earth is supposedly getting warmer.

We do not have a “green economy”, currently the popular Obama administration buzzword. We have an economy in crisis because banks are not financially stable and people are not buying cars, not able to sell their homes, eat out as often, and all the other countless decisions that mean formerly thriving industries and businesses are in big trouble.

The next time you hear someone talk about a “sustainable environment”, keep in mind they are talking about stopping the construction of roads, bridges, coal-fired or nuclear plants, and just about anything else that represents more energy, jobs, and development of any kind.

There’s a reason that Barbara Boxer’s California is an economic disaster area. It’s because they have passed so many “environmental” laws that businesses, industries, and people cannot leave fast enough.

While President Obama and some members of Congress try their best to ignore the vast amount of actual science that demonstrates there is NO global warming the truth will continue to manifest itself until it can no longer be denied.
Posted by Alan Caruba at 2:42 PM

Would you like a Link Exchange with our new blog COMMON CENTS where we blog about the issues of the day???

The problem is that many of the pundits promoting political views have no idea whatsoever what it means to "follow science".

Science requires one to follow all known paths of knowledge on the subject matter, and to duplicate results by meticulous integrity in scientific methods. New science is built upon the known work which precedes it!

What we have with the global warming scam is more akin to the reverse engineering of Chinese espionage on our technology.

Models were developed in reverse from predetermined and fantastical results, but even this proved impossible until various attributes were removed from the equations.

There is zero credibility with Hansens models which have been exposed as tools of fraud.

This never would happen in real scientific research.

Cap and trade is nothing more than more government control over Americans, and their freedom.

The perfect description of the process and of those who distort science and use it to deceive.

In the UK 14% of our power bills is because of carbon cap and trade. Being as this is paid by the power companies to the goverment it is paid by the consumer as a rise in cost per unit. We pay 5% VAT on power so we pay VAT on top of the tax as well. Great ain't it!
The best is that the public do not know of this 14%, so the "greedy" power companies get the blame as it was brought in as power costs rose anyway. The government publicly blames the companies for all of the rise and no-one explains to the victims.

I wish I knew what has happened to the English people. I think socialism has so weakened their wits and backbone that they accept all manner of government intrusion into their lives along with this obvious rip-off you've described. I have many friends in England and it saddens me to read of their situation and yours.

Alan,
I think it is a case of divide and conquer. So many PC laws and Bans. Handguns went first (I had five). Split the countryside from the towns with bans like hunting with dogs. Us and Them taxes blaming 4x4s etc for CO2 and AGW. People on benefit are "scroungers". It all drives wedges in to communities. Then blame the Evil Union for everything else (this is probably true). If any sort of resistance starts it can be nipped in the bud under some new law or EU directive.
Encourage people to rat on family and neighbours as the Stazi and Gestapo did and you control the population. This does not sound like Britain, but it is. and even worse.
New law this month, Upto 10yrs in jail plus fine for taking photos in public, even journalists, if the police thing they could be used for terrorist planning etc. You cannot photograph a policeman without fear of arrest! We are doomed!
We may be a social experiment by the EU to see how much a country will stand for, and we are isolated by the channel if we need controlling. Just a thought, but if you don't hear from me again, they can read our E-mails without a warrant......

Time for Brits to go into the streets with pitchforks and rid themselves of enslavement.

http://eureferendum.blogspot.com/
Some insight into EU and UK politics plus global warming if you want to see it from our side of the pond.

I can't see how anyone would be surprised by what has happened in the UK .... our forefathers left and came here ages ago for these very reasons, and what Brits endure today is the inevitable result. Luckily, our forefathers saw where things were heading and got out. Now all we have to do is figure out a way to prevent the same thing from happening here. Every time I hear some idiot say "well, in Europe they pay ..." as if we should be glad to be getting screwed like they are, I just want to throttle them!

Increasing repression is mild comment on what is happening in the UK, now. I would not go back their for a king's ransom and feel so much freer here in the Philippines. Yes, I am fully aware of the 'skullduggery' and extrajudicial events (and it doesn't happen in the UK?), here. But we are talking on a day-to-day level where every citizen is affected. Personal freedom is valued, here, and the streets fill if the people think they are being undermined or the price of fuel doesn't follow downwards the price of oil in quick succession. All the refuse is collected en-masse, weekly, from every barangay and goes to the city dump - no frightening local council intervention for overfilling or a plastic bottle. The people are passionate nationalist, fiercly proud to be Filipino, with the Philippine Flag fluttering everywhere and flag raising and lowering ceremonies outside all government and local government offices in every town and city.
My goodness, such behaviour in the UK would see you behind bars or fines a thousand pounds.
Every town and city is comprised of barangays (Villages) and each is policed and organised by its own elected members council. Local hooliganism, or any for that matter, is virtually non-existant matter; any misbehaviour is dealt with at barangay level. Even local business disputes are arbitrated by the local barangay council before it will be allowed to go to court - and it is free.
We can put our children into a free school system, with freedom of choice of school, right up to university.
Taxes are extremely modest to say the least with most people nor paying any. Either way, we are not crippled as in the UK. When we were setting-up business in the UK we had immediate demands for money even though we hadn't earned a penny. We shut-up shop and moved permanently to our hoem, here.
What the recent strikers in the UK failed to realise is that they have no jurisdiction or right to a job over any other EU citizen. The UK gov. ensures that. Mendleson's remarks to the effect 'Let them eat cake' places him at the head of the queue for a place on the first tumbrel to leave for Whitehall when the pitchforks emerge in angry hands.
Those that are able to leave the UK, most have made the connection that it is in decline. Many would like to follow but for various reasons are unable to do so.
The majority will never go back but hold much affection alluding to the nation we once were. As recently as 1981 our spirit of unity broke the surface as we won back the Falklands. Our leaders have much to answer for tying us into the dreadfull concept of the EU.