Buddy, Can You Spare a Dime? 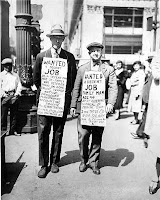 When television is filled with advertisements by firms offering to help you out of your debt by negotiating with the IRS or consolidating it to the satisfaction of your creditors, you have to wonder why President Obama and the Democrats intend to impose an estimated three trillion dollars in debt on the nation.

Much of that debt will have to be borrowed from other nations.

Would YOU loan any money to the United States of America today? Or tomorrow?

I wouldn’t and my guess is that, pretty soon, China and other nations will have second thoughts about buying U.S. Treasury notes

The February 11 Rasmussen polls revealed that 67% say they could do a better job on the economy than Congress; 75% oppose the nationalization of banks; 62% want more tax cuts and less spending; and 50% says the stimulus bill will make things worse. Does the public get it? Oh, yes!

Meanwhile, the President keeps talking down the economy, doing his best to use the current financial crisis to justify spending billions on “green” energy and “green” jobs, among countless other idiotic “pork” projects, though it must be said that money spent on infrastructure maintenance and new projects is a good investment.

At the heart of the economic crisis is a banking problem. It is a problem of credit liquidity—the willingness to loan money—that is the direct result of the government mucking around in the mortgage industry, having insisted that banks give mortgage loans to people who could not afford them.

The government was and is the problem. The answer, when the government already has a huge deficit, is not to go on a $799 billion spending spree or to stealthily introduce a program to nationalize the healthcare system.

The stimulus bill will not “create” jobs. Only private enterprise can do that, unless it is the intention of the government to create more government jobs and, in fact, much of the bill is devoted to expanding government.

I don’t even say this as someone with any economist credentials to flash around, but I do know that more borrowing or, worse, the printing of money “to put in circulation” will only lead to inflation.

Spending enormous amounts of borrowed money does not address the fact that it has to be paid back at some point. It is, in fact, stealing from future generations of Americans.

What is happening around the world is a tightening of credit. It’s not just the United States. The losses encountered by American banks are reflected worldwide. While job losses are increasing at home, the amount of job losses in China with a population of a billion are far greater. Now multiply that by job losses in other nations.

When the European Union discovered that the stimulus bill included a provision to “buy American” products as opposed to imported ones, they saw the specter of protectionism, the same action that prolonged and deepened the last Great Depression in the United States.

With an existing federal deficit of $1.2 trillion, how great is the insanity of adding additional spending and interest payments to it? The cost of borrowing will increase.

At some point, Congress will demand that the Federal Reserve begin to print more money. The result, as noted, will be inflation. Or, as was the case in the 1970s, “stagflation” as Congress relies on the Fed to finance a huge deficit.

We’ve been here before and all the “answers” Congress is proposing and has passed into a law awaiting the President’s signature will simply repeat all the errors of the past.

Congress and the White House is in the process of bankrupting America, compounding the excessive spending of the Bush administration while adding layer upon layer of government control to every aspect of a free market economy that was once the envy of the world.

Recall that the “stimulus” action taken toward the end of the last administration failed. Why would anyone seriously think that doubling down on the same mistake will produce anything other than a similar result?

I do think that this article that appeared today is worth viewing. I had estimated the total to be 65 trillion based on the 10 trillion national debt ceiling and the 50 trillion the government owed social security as of May of 2004. I wasn't far off. Where did all of that money go? It certainly didn’t go to the people.

The article is worth reading. Some things just can't be "hoped" away.