We Already Know the State of the Union 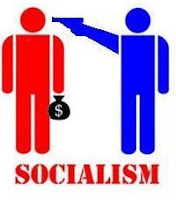 Do you want to know what the state of the union is? Here’s one way; the Dow hit a twelve-year low on February 23rd, the worst since May 7, 1997.

Meanwhile the government is contemplating taking over the banking system and, given the great job it has done in the area of mortgage loans, you know what confidence that will inspire.

Then, too, we have a President who has doubled or tripled the size of the deficit, but is promising to cut it in half by 2013, a year that would conveniently be the first of his second term if he were to be re-elected; a prospect that is not looking that good right now.

I am pretty sure the “stimulus” bill’s billion dollars that ACORN is going to get will help buy enough votes for him when he runs again, although I am inclined to think he might just announce that, like Napoleon, he is now emperor of the United States.

Aside from the bottom rung of the society who are reluctant to get and hold a steady job, can’t understand the concept of fleeing before a category five hurricane, and have lots of babies out of wedlock, the rest of the population is rapidly losing confidence in Mr. Obama and that clown car full of cabinet nominees that keeps showing up in the center ring.

The state of the union is not good and is, in fact, bad enough for a growing number of states to pass resolutions to restate and reassert their sovereignty. Some governors are saying they don’t want federal funds with all the strings attached; that they actually know how to run their state and what projects need tending. Other governors, of course, are wearing knee-pads as they visit the capitol to ask for more, more, more. Their states are broke. These governors are Democrats.
The word is that the President will address the need for universal healthcare, one of the liberal’s most treasured programs as it will put control of how healthcare is doled out in the hands of bureaucrats, not medical professionals. Just ask Canada or England what it is like to be sick there. Medicare and Medicaid, our systems for the elderly and indigent are essentially broke.

When even Slick Willy is telling you to brighten up your message, it would be a good idea to tell Americans that, yes, we can get ourselves out of this government-created mess and, yes, we are going to have to tighten our belts. That’s the kind of message someone who actually believes in the American spirit would deliver, but Mr. Obama believes in centralized government running everything and everyone’s lives.

If he throws in some dire predictions about the environment, he will be revealing how utterly debased his ability to tell the truth is. The Earth is cooling, not warming. If he tells us how great wind and solar energy is, he will be revealing that he hasn’t a clue about the difference between real energy and the pathetic stuff cranked out by so-called clean or alternative energy sources.

If the federal government is successful in imposing a Renewable Portfolio Standard on the states, it will doom any prospect of getting any more coal-fired or nuclear plants built because that money will be diverted to wind and solar farms, two of the least reliable sources of predictable, secure energy. Both require vast acreage and if you want to see mirrors and windmills from sea to shining sea, this is what you will get.

On the other hand, if Congress gets its way, a 1,294-page omnibus land bill will designate two million acres of new wilderness areas in nine states, establish three new national park units, enlarge the boundaries of a dozen existing park units, and add 1,000 miles of national wild and scenic rivers and ten national heritage areas to the nation’s inventory. In the process, it will put 1.4 trillion barrels of oil and 9.3 trillion cubic feet of natural gas off limits to development.

Congress is crippling the nation’s ability to be “energy independent” at the same time it keeps saying we have to get off of imported foreign oil.

In fact, the state of the union is abysmal precisely because of this and past Congresses that were so disengaged from reality that we are now living in some kind of la-la land where even carbon dioxide, the other most essential gas for all life on Earth, is going to be declared a “pollutant” and regulated by the Environmental Protection Agency.

Ronald Reagan said it best. “If history teaches anything, it teaches self-delusion in the face of unpleasant facts is folly.”

President Obama’s State of the Union speech will be very nearly devoid of unpleasant facts.
Posted by Alan Caruba at 12:32 PM

You guys watch this farce tonight and then do a synopsis. Myself I'll watch the Discovery channel after NCIS..

I noted Obama specifically promised to "halve the deficit he inherited from the previous administration". I heard no mention of the bubble he himself is blowing. Perhaps that will remain forever!