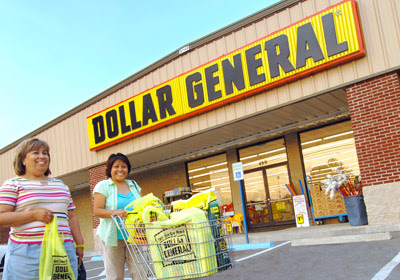 Something I never thought I would ever see in my former hometown, a wealthy New Jersey suburb of New York City, was a Dollar Store, but one opened recently in a former supermarket. Dollar Stores are giving Wal-Mart, Target, and similar outlets a run for their money and it’s not hard to see why. The local one has just about everything you could need and all for astonishing low prices.

In countless ways people are looking to save money these days. The looming problem, however, is the question of what happens when Americans wake up to learn that even a dollar can no longer buy anything?

“When Faith in U.S. Dollars and U.S. Debt is Dead the Game is over – And that Day is Closer than You May Think” is the cheery title of an article recently posted on EconomicCollapse.com.

There’s a reason why both the mental condition and the financial condition are called a Depression. It’s hard to be happy about anything when your nation’s currency is not worth the paper on which it is printed. The Federal Reserve’s answer, some fear, is to print more money and to continue to buy U.S. debt with it. It is doubtful, however, this Ponzi scheme will continue.

There isn’t a day that goes by when some U.S. government agency doesn’t send me a news release to announce that it is giving millions for something and, if our elected leaders are negotiating a solution to this insane spending and giving, there is precious little evidence of it.

New unemployment numbers are up. The administration continues to churn out thousands of pages of new regulations. It has stalled the energy sector from oil and gas exploration that could create thousands of jobs. And China is divesting itself of U.S. securities, anticipating a bad outcome for our economy.

Meanwhile, the so-called “entitlement” programs represent sixty percent of all the money the government spends. Without some changes, these programs are unsustainable. The Democrats’ answer is to depict Republicans as wanting to kill grandma.

In a Mid-May article posted on American Thinker.com, Randal Hoven spelled out a number of facts that are overlooked in the political battles between liberals and conservatives. “The entire debate is about a difference that is less than 4% of GDP. According to International Monetary Fund figures, government in the U.S. is spending 41% of GDP in 2011. The current debate is about whether government spends 40% or 44% of GDP.”

The government is absorbing far too much of the Gross Domestic Product for its own purposes. We are in a league shared by Greece and other nations with a serious financial crisis.

While the federal and state governments plunders every cent they can extract from those still fortunate to have a job, any investments, or will die at some point, both Republicans and Democrats have participated in expanding government since the last Great Depression.

While President Obama’s constant blaming of George W. Bush for his first two years became a joke, Hoven notes that Bush expanded Medicare with a prescription program and many of the “liberal” programs we conservatives denounce occurred while Bush was president. “No Child Left Behind”? Bush. Outlawing light bulbs? Bush. Ethanol subsidies? Bush.

The absurdity of President Obama’s mantra that millionaires and billionaires be taxed more ignores the fact that such taxes, even if we took all of their money, would barely cover the rate at which government spends and wastes such income.

While negotiations, we’re told, are occurring or will, the greatest impediment is Obama’s open disdain and dislike for Republicans. This cannot be underestimated in terms of finding a solution.

At the heart of our current problems is that, having inherited a financial crisis, Obama devoted the last two years to a government takeover of both the health care industry and the financial sector with two bills, each of which exceeded 2,000 pages and vastly expanded government bureaucracy.

More government control of the economy is the last thing this nation needs at this time. Or any time.

The real problem for the United States is the falling confidence and faith in the U.S. dollar. It is the default reserve currency of the world. Just about everything trades in U.S. dollars. It’s not only Americans losing faith in our government’s ability to maintain its value, it is everyone else.

In April, Standard & Poor’s downgraded its outlook on U.S. government debt from “stable” to “negative.” It warned that the U.S. could lose its prized AAA rating. Unless Congress and the current occupant of the White House take specific steps to fix Social Security and Medicare, the dollar compared to other major national currencies will continue to fall. It has fallen 17% since 2009. Moody’s rating service has also issued its own warning.

Pretty soon, nobody will want to buy U.S. securities used to currently borrow 41 cents of every dollar the government spends. The U.S. borrows about $168 million every single hour.

In April, CNSnews reported that “the federal government made $125 billion in ‘improper payments’ in fiscal 2010, more than eleven times the total 2010 spending by the U.S. State Department.”

That’s a government that doesn’t know what it’s doing and isn’t in a hurry to fix it.

That’s why a Dollar Store just opened in one of the most affluent suburbs of New Jersey.

I know the economists and others keep saying that the Recession that began in 2007, ended in 2009. I know they can and will cite all manner of good economic indicators, but if faith in the U.S. dollar continues to falter, it won’t matter.

As you point out implicitly, this is almost inevitable due to centralization of power in Washington, D.C. conducted by BOTH major political parties.

What then? My guess is that the various states will assume the power once again they gave up to the Feds over the last 100 hundred years.

Come to think of it: Jefferson Davis is smiling in his grave, because I see the Feds becoming the Confederates in not too many years.

@Ronbo: It would not surprise me to see the nation break into several regional confederacies. The federal government, as you say, will shrink to several essential functions and not much more.

Alan Caruba said...
@Ronbo: It would not surprise me to see the nation break into several regional confederacies.

The Republic of Texas sounds SO good!

This is the first time I've seen the US dollar weaker than the Canadian dollar.

I started printing money for use in my county. I am having some trouble with passing it. Maybe "Craigslist" credits will reign supreme.

Dollar General has the best deals on dog treats. If America is going to collapse, at least we'll be able to keep our dogs happy ...

Well, if the USA subdivides into two or more mini-republics, old Daniel Webster will be very unhappy_

Yes, Dan'l Webster's dead ----- or, at least, they buried him. But every time there's a thunderstorm around Marshfield, they say you can hear his rolling voice in the hollows of the sky. And they say that if you go to his grave and speak loud and clear, "Dan'l Webster ----- Dan'l Webster!" the ground'll begin to shiver and the trees begin to shake. And after a while you'll hear a deep voice saying, "Neighbor, how stands the Union?" Then you better answer the Union stands as she stood, rock-bottomed and copper-sheathed, one and indivisible, or he's liable to rear right out of the ground. At least, that's what I was told when I was a youngster.

Also, I think Lincoln had it right in his "House Divided" speech - America will become all one thing, or the other."

The reason I don't have to depend on Dollar General is because for decades I shopped at the earlier equivalents thereto. Frugality enables both saving AND partying--which, over time, allows one's billfold to become as fat and sassy as its owner.

I watch this wrong-headed monetary policy in action, along with the childish behavior of government in general and for all that I'm appalled I wonder more at the social and political effects outside the Beltway.

I note that the views of numerous state legislatures are opposed to the thinking of the Beltway Bandits. The idea of clusters of states striving for some form of peaceful secession does not seem at all unlikely.