The U.S. is Blocking Energy Wealth and Jobs 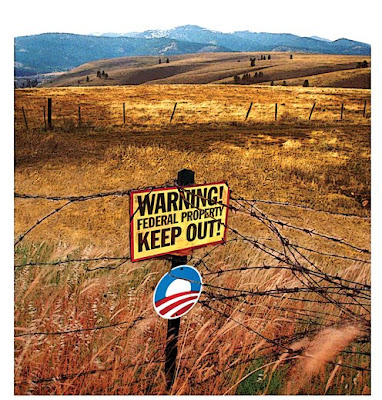 
What if I told you that the government was blocking America’s prosperity in the form of enormous untapped energy reserves that represent wealth and jobs that would once again put America on the path to fiscal security and growth?


Recently, Matt Vespa, on CNS.com reported that the International Energy Agency released a report that said the United States has the capacity to outpace Saudi Arabia as one of the world’s leading producers of oil. It projected that the U.S. could become a net oil exporter around 2020. It could become entirely self-sufficient.


Even so, the Obama administration just moved to cordon off 1.6 million acres estimated to represent one trillion barrels worth of oil in the name of conservation. At the same time, the Environmental Protection Agency is moving to so encumber hydraulic fracturing—fracking—with so many regulations it will thwart increased use of this extraction technology that has been safely in use for decades.


As Dan Kish, Senior Vice President for Policy at the Institute for Energy Research, warns, there is a major government effort “to federalize hydraulic fracturing regulation” which is already being done by states “in a very professional and knowledgeable way. Take fracking away, the oil and gas production drops.”


For years, through many administrations, the federal government has been doing everything in its power to restrict drilling domestically and off-shore where billions of barrels of oil remains untapped. In October, a Wall Street Journal editorial noted that “The latest example is the Interior Department’s little-noticed August decision to close off from drilling nearly half of the 23.5 million acre National Petroleum Reserve in Alaska.”


As far back as 1976, Congress designated the Reserve a strategic oil and gas stockpile to meet the “energy needs of the nation”, but oil and gas that is not extracted meets no needs. It keeps the nation dependent on imported oil and gas. In an August 22 letter to Interior Secretary Ken Salazar from the entire Alaska delegation in Congress called it “the largest wholesale land withdrawal and blocking of access to an energy resource by the federal government in decades.”


Noting that “Most of the other 11.5 million acres are almost indistinguishable from the acreage owned by the state that is being drilled safely nearby” the Journal pointed out that drilling on privately owned land has seen North Dakota pass Alaska as the second highest oil-producing state behind Texas.”


Mostly by stealth, more and more privately owned land is being purchased by the federal government. In September 2011, Audrey Hudson, writing for Human Events, reported that “The Obama administration is spending $35 million to buy 30,000 acres of private property across the U.S. this year to make permanent homes for mice, fairy shrimp, mussels, prairie bushes and beetles. Those are just some of the 70 critters and plants to benefit from the land purchases in a dozen states as part of the government’s habitat conservation plans for endangered species.”


Quoting Rob Gordon of The Heritage Foundation, Hudson reported that “The federal government already owns more land than Germany, France, the United Kingdom, Spain, Italy, and Poland combined.” The Endangered Species Act is just an excuse to secure ownership of more land and, in particular, to restrict development of every description from housing to hospitals.


Instead of a future in which our oil and gas reserves could unleash all manner of economic growth and the generation of thousands of new jobs, Ben Wolfgang, reporting in the November 22 edition of The Washington Times, “The drilling process that has brought the U.S. energy independence within reach faces renewed scrutiny from the Obama administration and an uncertain future in many states.”


“Next month, the Environmental Protection Agency is expected to release a draft of its long-awaited report on suspected links between water pollution and fracking, which uses huge amounts of water, combined with sand and chemical mixtures, to crack underground rock and release trapped oil and gas.” Fracking, however, occurs well below underground water levels and has been shown to have no effect on it.


What we are witnessing is the deliberate effort by the Obama administration, in concert with earlier administrations, to deny the economic benefit of tapping the nation’s vast reserves of oil and gas domestically and off-shore. This was evident, as well, in the President’s decision about the XL Keystone pipeline on the grounds that it threatened aquifers if allowed to proceed. Thousands of jobs were lost in that single decision with no evidence of the truth of the assertion.


As the nation sinks further into economic decline and default, it is obvious that the nation’s energy sector is being thwarted at a time when it holds the promise of lifting it out of growing unemployment, higher energy costs, and the drumbeat of utterly false environmental claims about greenhouse gas emissions.

If it's GOOD for America the Dems and Obama are against it.

I guess we need to ALL ride bikes built for 2 and sip lattes at Starbucks but it's been MY experience that it's a lot more fun to ride a Harley built for 2 and drink BEER!

Fred, Though I should have said so in the article, the real beneficiary of US energy policy is Saudi Arabia.

I hope my state chooses to ignore stupid federal laws, along with refusing to set up the exchanges!

Excellent editorial on the Obama Regime's drive to reduce the USA to Third World status...

In terms of Ayn Rand's ATLAS SHRUGGED (1957), we are in the middle of the book where the Feds start their final offensive to nationalize all private companies. This has the logical result of forcing them out of business.

COMING SOON: America reduced to feudalism and civil war, as the parasites (looters) fight endless battles over the corpse of American capitalism.

FINAL CHAPTER: America driven back into the 13th century and mass starvation.

Its our land not the federal ! Its just stealing !sick of it !