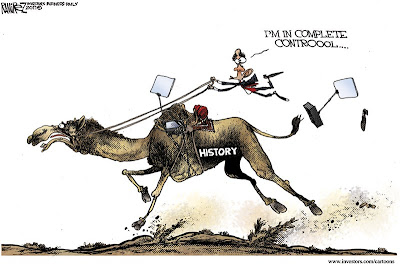 
Who recalls that one of the reasons Americans approved the invasions of Iraq was the fact that Saddam Hussein had used poison gas to kill Kurds?


Now we are told that Bashar al-Assad, Syria’s strongman, has used poison gas to defeat the rebels trying to overthrow him, but the attack killed civilians and came in the wake of news that Assad has been steadily gaining ground over the rebels.


The war has seen the slaughter of an estimated 100,000 Syrians. Why use poison gas at this point?


The U.S. was drawn into the Vietnam War with the false assertion that forces of the north had fired on U.S. naval ships, but it later came out that the attack was minor and hardly constituted a reason to make the huge commitment that led to the long war; one that it lost. Lyndon B. Johnson got the nation into that war with what is widely acknowledged to have been, at best, an exaggeration of the incident.


The 2003 invasion of Iraq, while America was still engaged in Afghanistan, was yet another ill-fated decision. Indeed, it can be argued that after driving al Qaeda out of Afghanistan following 9/11 there was no reason for American military to remain. The U.S. began to depart Iraq in 2011 and it has returned to chaos as the Sunni-Shiite conflict grinds on.


Was the poison attack a “false flag” incident intended to draw the U.S. into yet another Middle East war?


Is there any reason to believe that U.S. military involvement in Syria would have a better outcome than Iraq or Afghanistan?


Naturally, though, observers will speculate who might have initiated the attack, but most certainly one can rule out Russia and Iran, allies of Assad. The Israelis have no reason to want to see an expanded war in Syria. Israel has had a de facto peace with the Assad father and son dictators since the 1967 war.


Turkey, Jordan, and Lebanon, would surely want to see a quick end to the Syrian civil war because all are trying to deal with a humanitarian disaster involving over a million refugees that have fled the conflict, but there is little reason to attribute a false flag operation to them.


Would the rebels—an assortment of Syrian freedom fighters augmented by al Qaeda groups—use poison gas to draw the U.S. and the West into the conflict? The answer to that is yes.


The most striking attribute of the Obama administration has been its failure to make any good judgments about the Middle East other than to get out or “lead from behind.” Much of this is attributable to the foreign policy advisors he has gathered around him; high level appointees of his national security council and in the CIA have a very Islam-friendly attitude that led them to believe that the U.S. could encourage democracy in a region that has no democratic history to build upon. His latest appointment, the new United Nations ambassador is missing in action; no one seems to know where she is.


The fact is that U.S. presidents have been making bad judgments when it comes to war since LBJ. Clearly, the decisions by Bush41 and Bush43 have not been met with success and, just as clearly, Americans do not want to see our military committed to another conflict in the Middle East.


Obama’s decision to support the ouster of Mubarak, the former Egyptian dictator, led to a short term in office by a leader of the Muslim Brotherhood that, in turn, led to massive demonstrations against him and his removal by the Egyptian military. By then the nation was suffering an economic breakdown with hundreds of thousands facing starvation. Only humanitarian support from Saudi Arabia has prevented this. The U.S. continues to dither over aid to the Egyptian military that has been a reliable ally for decades.


Even Turkey that has had a secular government elected an Islamist who has become unhinged by events. Prime Minister Recep Tayyip Erdogan went from being Obama’s touted friend and partner to an offensive anti-Semite claiming Israel was behind Syria’s civil war. Obama has consistently misjudged who to support in the region.


As this is being written, American naval assets are being moved closer to Syria and American military have set up a command post in Jordan in the event an intervention is deemed necessary.
Writing in The Washington Times, Judson Phillips says, “This is Obama’s perfect war. It is perfect because there are no American interests involved, no reason for America to be involved, and no matter who wins the Syrian civil war, America loses.”
Most certainly, whether he decides to get in or stay out, it would come at a time when the Obama administration has forfeited any claim to leadership in the Middle East and elsewhere around the world. At this point, that is likely to be seen as Obama’s greatest legacy.

A century ago in 1913, neither Europeans, nor Americans could have imagined that World War I would begin the following year. The situation in Syria reeks of the same uncertainties and outcome.

Debka File confirms that gas attack was by Syrian forces.

American involvement in the Syrian civil war on the rebel side could be the spark that leads to the blaze of WW III, as the Russia supports the Regime side.

So let's see: WW III, a race war, a civil war and economic collapse (did I miss anything?) all seem to be in the cards very soon.

It sure sounds like the crack of doom to me!

(Now where did I put my flak jacket and steel helmet?)

I've felt allegations of chemical weapons use by the Assad regime were phony from the start. As you pointed out, the rebels are the ones who would benefit from it. It would be foolhardy for the Assad regime to use them with the west looking for a reason to attack.

Scary thing about this is the way the mainstream media hardly question that the Syrian government used chemicals, with hardly a word being said about who would really benefit from their use.

Scarier still is the western governments ignoring the false flag and apparently getting ready to attack Syria anyway.

Did you ever read, "The Guns of August" in which a noted historian relates the important events leading up to the First World War?

Like this current Syrian civil war, there was no good reason for the Great Powers of the day in 1914 to be involved in the aftermath of the assassination of an Austrian Royal by a Serbian nationalist; however, factors like the alliance system where the Great Powers of Europe were divided into two opposition camps made WW I almost inevitable.

Do we not see the same sort of game at play today?

Syria has as allies Russia and Iran, the rebels are allied to Saudi Arabia, which is the ally of the United States and Britain, who in turn are NATO allies.

The NATO alliance charter states that an attack on one country is an attack on all NATO countries, which of course it would be if the Americans and British attack Syria.

Syria is also a key ally of Iran, which is eager for a war against the West, and would likely respond, perhaps with nuclear weapons...

Lastly - and most importantly - there is nuclear armed and capable Russia, another key ally of Syria. I don't think Russia wants a WW III, but they didn't want to become involved in the First World War either; however, they were the ally of Serbia.

Perhaps this will be "The Guns of August Part II," as two powerful blocs of countries clash in conventional and nuclear combat because they were all sucked into a conflict no one wanted.

A cynic might say, "Well the upside is that if have Third World War of mass nuclear destruction mankind will never have a Fourth World War."

The NATO alliance charter states that an attack on one country is an attack on all NATO countries, which of course it would be if the Americans and British attack Syria.

I'm either misreading the statement, or you miswrote it. Syria hasn't attacked any NATO countries. We're getting ready to attack them. I don't see how that means we have an obligation to join in attacking another country. Again, maybe I'm misreading.

Syria is also a key ally of Iran, which is eager for a war against the West, and would likely respond, perhaps with nuclear weapons....

I've seen no evidence, other than some rhetoric from Iran warning against getting involved in Syria and the typical islamic rants, of Iran being eager for a war against the west.

Iran doesn't have nuclear weapons capability and likely won't. The vast majority of the intelligence community believes they gave up their nuclear weapons programs a decade or more ago.

Iran has consistently said it only wants to develop nuclear power for energy. If true, wouldn't that be an act of war to tell them they can't?

Forgive me for tending to believe Iran. When the mainstream media continues to promote that they're developing nuke weapons rather than nuclear energy, I can't help but think they're being set up for a hatchet job, as Syria has been with chemical weapons.

... there is nuclear armed and capable Russia, another key ally of Syria..

Yep, and I'm of the impression they may well be the most sane country involved in this. They have been the voice of reason since the beginning of this and don't have the aggressive track record our country does with unprovoked attacks.

Yep, they attacked Afghanistan first, but saw that was an error and left. That's to their credit.

The bottom line is, if we should be supporting anybody in the Syria thing- which I'm not proposing- it should be the Syrian government. As it stands, nothing good will come out of our involvement or support of either side. However, those insidious elements within the War Party have their own agenda and the die seems to be cast.