Is Obama Brilliant or Stupid? 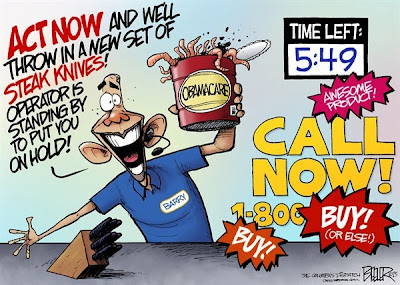 The debate that is constantly swirling around the Internet’s many websites and blogs is whether Barack Obama is brilliant or stupid? Like most of the nation, opinions are fairly divided between those who think he is an evil genius and others who think he is an imbecile.

When people start to defend themselves by saying out loud that they are not stupid, there’s a better than average chance they are stupid and, like most stupid people, are denying it. At his Friday press conference in which he declared another illegal change to the Affordable Care Act (one made without going to Congress and requesting that the Obamacare “law of the land” be changed), the President said, “I don’t think I’m stupid enough to say this is going to be as easy as shopping around on Amazon or Travelocity.”

Northwestern University’s Prof. Eugene Kontorovitch, a legal affairs policy advisor to The Heartland Institute, responded to Obama’s press conference saying, “President Obama did not specify what statutory authority, if any, he thinks authorizes him to make such dictats and, given the gargantuan length of the Obamacare statute, he might still be looking.”

After the President’s press conference, the president of America’s Health Insurance Plans, Karen Ignagni released a statement saying that Obama’s administrative fix to the health plan cancellation problem “could destabilize the market and result in higher premiums for consumers,” pointing out that “Premiums have already been set for next year based on the assumption of when consumers will be transitioning to the new marketplace.” There is a solution to this; repeal Obamacare entirely.

The facts reveal that he was stupid enough to believe Obamacare would work. He let the law go into effect knowing that Healthcare.gov was not ready to sign up people and that millions were going to lose the insurance plans they had. Some argue that that was brilliant; evil but brilliant.

Playing devil’s advocate, I would argue that Obamacare is the ultimate example of how utterly stupid liberal programs to alter the nation’s economy are. Why would anyone think that the government could possibly take charge of one sixth of the nation’s economy and arguably the finest healthcare system in the world, and not completely ruin it?

The government took over the nation’s educational system and it has been failing students for decades, producing graduates who have to take remedial programs in college just to keep up with the expectations of higher education. The government took over the environment and, instead of being responsible for removing pollution from the air and waters, now have an agency that is undermining all aspects of the economy, from access to energy reserves to increased costs of manufacturing.

Obama’s handling of the nation’s foreign affairs has been a dismal failure. Either he is stupid or his advisers are dumber than he is. His first Secretary of State, Hillary Clinton, utterly failed to respond to the U.S. ambassador’s calls for help from the Benghazi consulate when it was under attack and both she and the President lied about it, claiming a video no one had seen was the cause of an event that occurred on the anniversary of 9/11. After the latest negotiations with Iran that would give that rogue nation more time to construct a nuclear weapon fell through, the current Secretary of State, John Kerry, said, “We are not blind and I don’t think we’re stupid.” He was wrong on both counts.

As noted, the voters are divided but one wonders why liberals never ask themselves why Obama feels it is necessary to lie about everything before and after it has been put in action.

A November 13 Rasmussen poll found that “Voters are evenly divided when asked whether President Obama deliberately lied about the impact of the health care law before it was passed by Congress. But they strongly believe Americans should be able to keep their existing health insurance policies.”  The survey found that 46% of likely U.S. voters believe the president purposely misled Americans about the potential impact of the health care law. Forty-five percent (45%) disagreed and think Obama honestly expected the law to work out the way he said it would. Ten percent (10%) were undecided.”

You don’t have to be a political pundit to know that millions of Americans, by November 2014 when the midterm elections occur, are going to be very angry about the disruption to their lives associated with Obamacare; higher premiums, loss of their personal physician, and the concurrent effect on the economy as many are forced into part-time status or lose their jobs.

Americans have always worshipped success and, conversely, fled from failure in whatever form it took. Obamacare is a legislative abortion, a failure of stupendous legislative over-reach and hubris.

If Obama is brilliant, one might conclude that he would have been able to set the economy on a path of growth in the wake of the 2008 financial crisis, but the data reflects the millions of Americans who are out of work five years after he took office and the slow growth of the economy. Previous presidents, faced with similar circumstances were able to turn the economy around, but not Obama.

It is not sufficient to say that Obama is a significantly flawed individual. We are all flawed in some regard, but I think it is safe to say that he is stupid in a very profound way.

The reality of the healthcare plan that he and his fellow Democrats in Congress inflicted on the nation is such that only their liberal view of that the greatest economic engine the world needed a vast revision—a fundamental transformation—is now revealed as breathtakingly stupid.

That leaves half the nation hostage to the other half that believes he is not a liar and not responsible for the degradation of a great nation still capable of achieving great progress and growth. Much will depend on how angry and unhappy the stupid half of the voters are in November of next year. They might just rouse themselves to rid Congress of the Democrats in power in the Senate and reduce their numbers further in the House.

At least, we can hope so.

Is ANY cult leader brilliant, or stupid? The question, brilliant or stupid, misses the point, which you have included in passing in this post: Obama has LIED to the American people, throughout his time in the national spotlight, and has thereby shown his real focus and his sole method of operation. HE HAS MADE IT HIS LIFE'S WORK TO DECEIVE AND HOAX HIS WAY TO THE TOP.

Insofar as his lies are as blatant, as transparently false, as they HAVE BEEN AND CONTINUE TO BE (ever since his first such lie, about "not knowing" Rev. Jeremiah Wright as the radical hate-monger he is), he is obviously stupid. Insofar as roughly half the nation nevertheless habitually chooses NOT to see through his lies, he plays on their unintelligent following of his chummy, sanctimonious, false and divisive lead brilliantly. In reality, though, that they allow themselves to be taken in reflects on THEIR stupidity, not on any real brilliance on his part (as any of us who easily see through his stupid lies can attest).

Remember, "Oh, what a tangled web we weave, when first we practice to deceive." What we have now is Obama's tangled web of lies. He has been practicing deception his whole adult life, has made it his profession and his ONLY TALENT. And an insensitive and incompetent Republican party, and a deranged, vengeful Democratic party, have brought the insanity of this man into control of this country.

Can such a divided and stupid country survive those divisions, and that mass stupidity? The lesson of history (and of Obama, thus far), is that it cannot. A house divided against itself cannot stand.

Let's not forget that those college programs students are struggling to get into today are turning out generations of students who are largely incapable of rational, objective thought. Our educational system is in far worse shape today than most people realize. I credit that fact, combined with the left-wing lies and propaganda that the mainstream media shamelessly churns out, for the mess this country is in today.

Don't count on the stupid ones to rid Congress of the Democrats, the free ride is important to them.

The United States of America: Built by Enlightenment men of genius, but currently being run into the ground by Marxist morons.