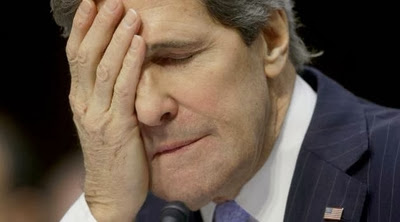 
Recently, in the wake of another diplomatic disaster for the Obama regime, Secretary of State John Kerry said, “We are not blind and I don’t think we’re stupid.”  He and the President may not think they’re stupid, but the leaders of nations around the world most certainly do.


In a recent Wall Street Journal commentary by Brett Stephens, titled the “Axis of Fantasy vs. Axis of Reality”, he cited the French rejection of the negotiations with the Iranians, saying “the French also understand that the sole reason Iran has a nuclear program is to build a nuclear weapon…This now puts the French at the head of a de facto Axis of Reality, the other prominent members of which are Saudi Arabia and Israel. In this Axis, strategy is not a game of World of Warcraft conducted via avatars in a virtual reality.”


Stephens said of Kerry’s remark on Meet the Press, “When you’ve reached the ‘don’t call me stupid’ stage of diplomacy, it means the rest of the world has your number.”


The Secretary of State carries out the President’s foreign policies, but when both are ideologically blind to reality and both harbor a deep disdain for an American history of global leadership since the end of World War Two, they are going to initiate and stumble around in ways that convince other nations to seek leadership elsewhere or to pursue they own interests without looking to the U.S. for support.


John Kerry has one of the worst records imaginable to be our Secretary of State. I have always regarded him as a moron with strong anti-American beliefs. I shudder to think he was the Democratic Party’s candidate for President in 2004, losing to George W. Bush who thankfully had previously defeated Al Gore. Two worse candidates for the presidency are hard to imagine.


Kerry first came to my attention and that of most Americans when he testified on April 22, 1971 before the Senate Committee on Foreign Relations, claiming that American veterans of the Vietnam War had committed war crimes that were “not isolated incidents but crimes committed on a day-to-day basis with the full awareness of officers at all levels.” Kerry had, at that point, become a spokesman and organizer for the group, Vietnam Veterans Against the War. Towards that end, he was working closely with people, many of whom could only be described as revolutionary Communists.


A lot of my generation opposed the Vietnam War in the belief it was the wrong war in the wrong place, mostly the result of Lyndon Johnson’s bad judgment. It would cost our nation more than 50,000 lives of those who were sent into that grinder. We did not see it as an excuse to lie about their participation, comparing them to barbarian hordes. Kerry said at the time, “We cannot fight Communism all over the world and I think we should have learned that lesson by now.” The U.S., however, did not stop resisting Communism and, in 1991, the Soviet Union would collapse as just one result of the resolve.


Like most liberals, Kerry has a long record of embracing the worst dictators of the modern era. As early as May 1970 Kerry met with North Vietnamese/Viet Cong delegations at the Paris Peace talks to discuss various proposals, an action even Kerry acknowledged was “on the borderline of private individuals negotiating, etc.” It was, in fact, conduct prohibited by the Uniform Code of Military Justice. Now, as Secretary of State he gets to negotiate for the U.S.; most recently with the Iranians.


In a commentary, “Kerry: Stay Home”, Prof. Israel Hayom, director of the Begin-Sadat Center for Strategic Studies and a fellow at the Middle East Forum, wrote “the prism of the Obama administration on the Middle East and global affairs is fundamentally flawed. An American policy that supports the Muslim Brotherhood, estranges its traditional Arab allies such as Egypt and Saudi Arabia, allows Iran to get closer to the bomb, sees in Turkey’s Erdogan a great friend of the West, and insists that the Israeli-Palestinian conflict can be ended in nine months is dangerous and does more damage than good. Similar complaints about poor U.S. political judgment are abundantly voiced by America’s friends in Asian and Eastern European capitols.”


“It is the enemies of the U.S. who rejoice in President Barack Obama’s foreign policy and who relish in America’s perceived decline in world affairs.”


A recent example of the fumbling that passes for foreign policy by the President and the Secretary of State was seen in Obama’s threat to attack Syria in the wake of its use of poison gas. It is useful to know that Kerry had met with Syria’s dictator, Bashar Assad, on more than one occasion and, as a Senator, had worked to undermine the Bush administration’s efforts to isolate Assad.


In February 2009, days after Obama’s inauguration, Kerry was sent to Syria to establish a new relationship. He would make five trips there between 2009 and 2011. After a passionate speech on August 30 advocating the President’s proposed military action against Syria, Obama decided to seek congressional approval before taking any action. Kerry looked every bit the fool he was and is. As it turned out, it was the Russians that saved their bacon, stepping in to expedite the destruction of the Syrian poison gas arsenal.


Suffice to say, Kerry and Obama are wrong on virtually every aspect of foreign relations currently confronting the nation. One cannot finish this brief review, however, without noting Kerry’s view that “climate change” is “as dangerous as any of the sort of real crises that we talk about.” He has been a longtime advocate of “cap-and-trade” programs to reduce so-called greenhouse gas emissions. There is no “global warming” and the Earth has been a cooling cycle since around 1998.


This capacity to ignore the facts, whether it is about the idiotic belief that humans can or should do anything about the climate or that the Iranians will say anything to continue their pursuit of nuclear weapons that makes Kerry a very dangerous, world class doofus in charge of implementing Obama’s equally foolish foreign policies.


Smarter men than the obsequious John Kerry have abandoned their allies and even started wars. He is in a position to do a great deal of harm, not just to the U.S., but worldwide.

In 1970 while stationed at Arlington Hall Virginia as a young soldier, I observed John Kerry and his anti-war Vietnam Veterans (it later turned out that few of them had even served in the military) in action on Capitol Hill.

Kerry (a complete stranger to me then) and the rest of his mob impressed me as being typical ignorant Leftist filth, we saw so much of that year, and words cannot describe the contempt most of us in my Military Intelligence unit felt for these long haired, sinking, lice infected and usually dope smoking bums.

It's interesting how the Left always paints the Right as being stupid, but my experience indicates the opposite.

What truly is scary about these two blithering idiots is they actually believe they have the intelligence to accomplish wonders in either of these jobs. Kerry has no moral foundation nor does his boss. Is it any wonder the world's leaders are laughing at them? Dumb as dirt. What could be more frightening than people like these two with positions of responsibility? Well, one thing is sure. These two have solidified their membership in “The Club For the Galacticly Stupid”, so long as they remember Nancy Pelosi is President.