Stabbing Israel in the Back 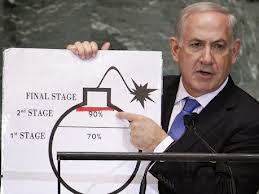 
If Barack Obama told me “I have your back”, I would spend a lot of time looking over my shoulder. His promises to Israel are dirt, worthless, and duplicitous in the extreme. Taken together, they have ensured that Israel will attack some of Iran’s facilities that are striving to make it a nuclear power with nuclear weapons.


An article in the October 31 edition of The Jerusalem Post, “White House official confirms Israeli attack on Syrian missile site” is just one example of the steps the Obama administration has taken to seriously undermine Israel’s security and hasten Iran’s ability to make good on its promise to “wipe it from the map.”

According to the article, an “anonymous US administration official” responded to a CNN inquiry that Israel had conducted air raids against a Syrian missile base near the port city of Latakia where “missiles and related equipment” were stored “out of concern that they would be transferred to Hezbollah.”  Tellingly, the reporter noted that “It is unclear why the U.S. would leak such information as it could increase the pressure on Syria to retaliate against Israel.”


Monday, November 4th, marks the 34th anniversary of Iran’s seizure of U.S. diplomats in 1979. To this day Iran’s slogan has been “Death to America” and “Death to Israel.”


Little noted by most Americans, the Obama administration is feverishly trying to establish diplomatic relations with Iran despite the fact that it has technically been at war with us ever since our diplomats were seized from the U.S. embassy in Tehran, holding them for 444 days until their release the day Ronald Reagan was inaugurated.


One of the best, most reliable sources of news from and about Israel is the Debka File and the same day the US blew the whistle on the Syrian attacks, they posted an article, “Braced for imminent nuclear accord with Iran, US pulls away from military option, IDF stays on the ready.”


The article bluntly stated that Israel “plans to keep in place advanced preparations for a unilateral military strike on Iran’s nuclear program in 2014.” On November 1st, Debka File reported on a “Mystery explosion at Iran’s Arak heavy water reactor” that has been under construction. It is the second time the facility has had an explosion.


The Obama administration has taken a very hard line against Israel’s warnings regarding the decades-long efforts of Iran to become a nuclear power. Flitting around the Middle East these days, Secretary of State, John Kerry, said “Some of suggested that somehow there’s something wrong with giving diplomacy a chance. We will not succumb to those fear tactics and forces that suggest otherwise.”


Kerry seems oblivious to the fact that the administration’s diplomatic efforts in the Middle East has managed to seriously harm U.S. relations with virtually all the nations in the region, not the least of which is Saudi Arabia that has as much to fear from a nuclear Iran as Israel. The Gulf States are all fearful of Iranian progress toward nuclear power.


Observers have concluded that Kerry’s efforts are aimed at “lifting decision-making on sanctions out of the hands of Congress and transferring it to this secret negotiation mechanism. By this means, President Obama hopes not only to thwart Congressional calls for tighter sanctions against Iran, but also to forestall Netanyahu’s efforts to this end.”


Indeed, all of Obama’s Middle East policies have come to a bad end at this point. The withdrawal of U.S. troops from Iraq has resulted in that nation becoming a bloodbath as al Qaeda, the Sunnis, and the Shiites wage a war of subversion against the present government there, in which the casualties are mounting weekly. The U.S. is also in the process of withdrawing from Afghanistan.


The tilt toward the Muslim Brotherhood that took over Egypt after an election, resulted in the then-president Muhammad Morsi’s efforts to impose harsh sharia law on the nation. Egyptians rallied against him and the military arrested him and has cracked down on the Brotherhood. There are reports that Egypt, a longtime U.S. ally, is now discussing the purchase of weapons from Russia. U.S. aid to Egypt has apparently ended.


One cannot overlook the disastrous decisions that followed the overthrow of Muamar Gaddafi, Libya’s former dictator that resulted in the December 11, 2012 attack in Benghazi that cost the life of the U.S. ambassador and three security personnel.


Israel knows that Obama is no friend and, therefore, the protection and support of every previous administration since the days of Truman are at an end until the current administration is replaced.
It will, as it has in the past, do what it must to defend itself against Iran and the threats posed by Hezbollah and Hamas. It has no other option.


Obama is increasing the threat of war and he knows it.