The Macy's Parade and Obamacare 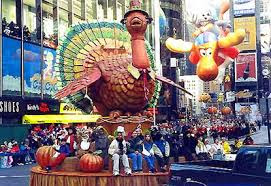 
The Macy’s Thanksgiving Day parade is an extraordinary logistical achievement when you consider how many bands are involved, how long it must take to make the remarkable floats and, of course, the famed balloons. I marveled, too, at the remarkable timing of the parade in which each unit occupied a specific amount of time on camera, either as a band executing a choreography or just marching by.


An America that can produce an extravaganza like the parade should be able to demonstrate comparable skills in other areas of activity and, in fact, it does. Despite the occasional delays because of weather conditions, thousands of flights take off and arrive on time every day. Trains get where they’re going. Things that are scheduled fulfil their schedules with admirable skills.


Amazon.com is a miracle of merchandizing. You can purchase anything from the site and be fully confident that you will receive an email confirming the purchase and telling you when it will arrive. Thanks to UPS and Fedex, millions of packages move around the nation. Even the U.S. Postal Service does a good job.


I am confident, too, that the various products I want to purchase at my local supermarket will be on the shelf when I arrive and will be restocked with a precision that goes largely unnoticed.


Even the government seems to do a reliable job of mailing out hundreds of thousands of Social Security checks each month and I am sure there are examples of other ways it demonstrates competence, but….


Obamacare has demonstrated what a socialist power-grab looks like when those seeking to take over one sixth of the nation’s economy attempt to implement a program whose ultimate purpose is to give the government control over your health and, indeed, whether you live or die.


Its technical failures immediately manifested themselves and the stories of people with serious illnesses who have lost their health insurance coverage are already daily news items.
This isn’t just a case of government over-reach, it is Communism and, while Americans have learned to live with less intrusive and even “safety net” programs instituted from the 1930s to the 1960s, they instinctively know that Obamacare constitutes a catastrophic change in their relationship with the government.


A nation based on a document, one of whose purposes was to limit the size of the central government—the Constitution-- is still largely populated with people who prefer as little government involvement in their lives as possible. That view runs from the local motor vehicle agency to Congress.


When government at all levels begins to rival private commerce in terms of the number of people it employs and ends up with more pension and other debt than it can pay, we get cities like Detroit or Stockton, California. We end up with bankruptcies and defaults that tell us that the interests of the government employees have taken precedence over those who pay their salaries and other benefits.


In the private sector, if a business does not compete effectively or provides a product or service that has been overtaken by new technology, it is allowed and even expected to fail. Government, however, is forever.


I doubt that Obamacare will be forever though there is a risk of that if too many people do not tell their Congressmen and women they want it repealed.

Ours is a participatory democracy. Obamacare is going to need a lot of push-back. We are going to need a Congress cleaned of those spineless Democratic Party apparatchiks who voted for a bill they had not read. They must be replaced and the year ahead will be one in which the Tea Party movement and Republican Party are going to devote themselves to that effort.


America has had its first brush with its first Marxist President and the evil of his ideology is beginning to hit home. He has become the greatest threat to our future and one who has put our right to privacy, our belief in the freedom of religion, and our national security at high risk. He has put liberal shibboleths on full display.


The Macy’s Thanksgiving Day Parade should remind us of our capability to stage such extraordinary events and return home to enjoy a traditional dinner surrounded by family and friends. We do not return to a government feeding station with a chit in our hand to receive the exact same amount of food as everyone else.


Obamacare is a government health clinic and, if you do not pay a fine or do not pay the many taxes hidden within it, you will not be allowed to get it line. You will be told to go home and die.

So true. As C. S. Lewis once put it, "No man who says I'm as good as you believes it. He would not say it if he did. The St. Bernard never says it to the toy dog, nor the scholar to the dunce, nor the employable to the bum, nor the pretty woman to the plain. The claim to equality, outside the strictly political field, is made only by those who feel themselves to be in some way inferior. What it expresses is precisely the itching, smarting, writhing awareness of an inferiority which
the patient refuses to accept. And therefore resents. Yes, and therefore resents every kind of superiority in others; denigrates it; wishes its annihilation. Presently he suspects every mere difference of being a claim to superiority. No one must be different from himself in voice, clothes, manners, recreations, choice of food: 'Here is someone who speaks English rather more clearly and euphoniously than I -- it must be a vile, upstage, la-di-da affectation. Here's a fellow who says he doesn't like hot dogs -- thinks himself too good for them, no doubt. Here's a man who hasn't turned on the jukebox -- he's one of those goddamn highbrows and is doing it to show off. If they were honest-to-God all-right Joes they'd be like me. They've no business to be different. It's undemocratic.' "

"Obamacare is a government health clinic and, if you do not pay a fine or do not pay the many taxes hidden within it, you will not be allowed to get it line. You will be told to go home and die."

It's amazing how much Obamacare looks and smells like Soviet programs in that it's just a snarled mess that doesn't work.