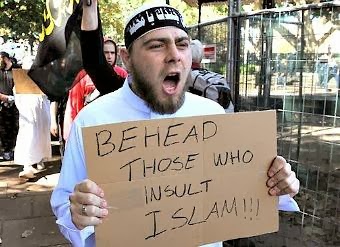 
What does it say about Islam that both the Super Bowl in America and the winter Olympics in Russia require massive security against an attack by jihadists?


What most people in America and the West have not been able to grasp is Islam’s hatred of the infidel—the unbeliever. It has existed for fourteen centuries. On top of that is the schism within Islam between Sunnis, the majority of Muslims, and Shiites.


Because few among us have actually lived among the Muslims of the Middle East our understanding of that particular element of Islam, Arabs and Persians, is gained only by the daily headlines of the way they kill one another in those nations where the Sunnis and Shiites are locked in a war to gain or retain power.


While Islam looks and sounds like a religion, it is more a political and economic entity concerned with controlling those populations where it is dominant, largely keeping them unable to resist the despots, monarchs, and clerics in charge. Iran’s Supreme Leader, for example, is worth billions.


What the West has yet to grasp is its intent on world domination. That is why jihad—the so-called holy war—is a central pillar of faith.


The worship of Mohammed, believed by Muslims to be the final prophet who replaces the Jewish prophets and Jesus, doesn’t just permit but encourages the Islamic hatred of the infidel. It justifies any action taken against Judaism and Christianity; it includes the religions of Hinduism, Buddhism, and all others.


At a time when the U.S. is attempting to encourage Iran to give up its program to acquire its own nuclear weapons, those engaged in this ignore decades of deceit while the program continued and the example set by Mohammed who signed treaties when he felt his group was not strong enough to gain power and then broke them. His history is filled with attacks, taking women and children hostage, and looting until he had built a force capable of prevailing.


As one of the leading authorities on Islam, Ali Sina, has written, “This is how Muslims have operated ever since. They offer peace and sign treaties when in their estimation the prospect of winning the war is not good. But they will break their treaties the moment they become confident of their victory.”


In the 1970s, after centuries of little to no Jihad, Muslims resumed it, launching their terrorist activities. “Jihad was never abandoned.” Sina warns that, “Unfortunately the Westerners have no understanding of the Muslim mind and here lies their vulnerability.”


This explains in part why, following 9/11, a classic terrorist attack, the U.S. response in Afghanistan should have been a limited, but devastating attack followed by withdrawal. The same applies to Iraq where the reason given was the removal of Saddam, its dictator who had previously attacked Kuwait, and the belief he had weapons of mass destruction. Instead of an attack comparable to Kuwait, his quick capture and death, America settled into Iraq thinking it could introduce democracy. Al Qaeda, the Sunnis and Shiites had other thoughts. Today they are locked into bloody battle.


The same applies to Syria where hundreds of thousands have died as various Islamist groups, generally referred to as al Qaeda these days, as they have fought for control of the nation and been resisted by Bashar Assad, the son of its former dictator. Only mentioned in passing has been the wanton killing of Syrian Christians. Today the Middle East is a no-man’s land for Christians.


Open Doors USA recently released its 2014 World Watch List, a report that ranks the 50 worst nations engaged in the persecution of Christians. What it reveals is that 82% of all the prosecution occurring worldwide is perpetrated by Muslims.


It has become a cliché that, while all Muslims are not terrorists, all the terrorists are Muslims.


As Sina bluntly says, “The Islamic terrorism has nothing to do with what the Westerners do and there is nothing that they could do to diminish it except to fight it and destroy it.” An author and founder of Faith Freedom, a movement to encourage Muslims to leave Islam, Sina says “The truth is that Islam is a sick ideology. It is an ideology of hate and it can do nothing but produce death. This is the reality that the world is unwilling to accept.”


In the Middle East the U.S. has only one ally and that is Israel, the Jewish state. While it has maintained diplomatic relations with Saudi Arabia for decades since World War Two, that nation has invested billions to build mosques and spread Islam throughout Europe, America, and everywhere else in the world. They are Sunni mosques where Shiites are not welcome.


The misnamed “Arab spring” has revealed how rotten to the core Islam is. Those despots who were overthrown in Tunisia, Libya and Egypt has left the first two nations in chaos and, in Egypt, the army, recognizing who the enemy is, has declared the Muslim Brotherhood the enemy. So has the United Arab Republic.


Iran is the classic case of Islamists overthrowing the shah and instituting a nightmarish state in which Iranians have no justice system to turn to and a legislature in name only. The ayatollahs rule. If they acquire nuclear weapons, they will use them, first against Israel, and then likely against Saudi Arabia, a Sunni nation. The Iranians are Shiites.


A reading of the Qur’an would tell you what America and the West is up against. Islam is not about peace. “Fight in the cause of God those who fight you…And slay them wherever ye catch them…And fight them on until there is no more tumult or oppression and there prevail justice and faith in God…” (2:190-193).


“The punishment of those who wage war against God and His apostle and strive with might and main for mischief through the land is: execution, or crucifixion or the cutting off of hands and feet from opposite sites, or exile from the land.” (5-36).


“…fight and slay the pagans wherever ye find them, and seize them, beleaguer them, and lie in wait for them in every stratagem (of war…” (9.5)


The Qur’an is a battle plan for world conquest.


When President Obama says that al Qaeda is being defeated, he is deceiving Americans. Thus far his Middle East policies have seen Egypt, Saudi Arabia, and Syria turn against us. American influence there is waning as the Jihad continues and spreads. In Benghazi, Libya, it cost us the life of our ambassador and three security personnel. And then the President and Secretary of State lied about it. The date of the attack was September 11, 2012.


Islam demands that infidels either convert or accept a limited role called dhimmitude. That is our fate if we do not demonstrate our power and destroy those seeking to dominate the world.

The sad thing our president bowed to the Saudi prince on his first trip to the middle east. Is there any doubt he is a muslim?

I agree, let them strike then hit them with everything we have until they stop. That is all they understand. No more occupations.

I know, as well as you do, these cretins aren't going to come here and behead those that insult Islam, if they were I would have been headless for a long time, but it takes courage to confront a grown man, one that is well armed and living in a free nation.

Muslims don't have ANY courage, in fact, they are nothing more than despicable COWARDS that can only act out by blowing up bombs and killing innocent people...

I wonder? Is that disrespecting them or do I need to try harder??

Islam breeds maimed and stunted souls, taught hateful lies from their earliest youth, in proportion to their unquestioning adherence to those lies. Jihadists are crazy, misunderstanding their terror and hatred of their own "religion" (I agree it is not a true religion, but a death cult) and projecting it upon those outside of their nightmarish beliefs.

This post should naturally segue into one on Obama's early exposure to Islam, to his continuing approval of it, and also to the suborning of more vengeance-minded American blacks by it, going back to individuals like Cassius Clay/Muhammad Ali, and the Black Muslims. Such a post should also note how Obama's pattern of inveterate, self-protecting and self-aggrandizing lying is of a piece with Muslim lies about the superiority of their "religion" and "culture", contrary to the clearly observable truth. I recently read that Obama lied to his Hawaiian classmates as a school student, telling them his background (in Indonesia, which of course they did not know anything about) was of a privileged, highly-placed heritage in the Muslim world. He found they believed him, and I think this explains why he has been such a confirmed liar, at every opportunity, ever since. It also fits author Shelby Steele's understanding of Obama, as a black youth in a dominant white culture, putting on a "mask" to gain acceptance and admiration, but of course failing thereby to develop true character and be a responsible adult. He can only be a jihadist himself, thriving only by setting himself apart from and above those whose world he hates.

Perhaps there is something positive about Obama becoming the de facto Socialist dictator of America and ruling by Executive Orders - a Nationalist American president could decree that Islam is a totalitarian ideology and that all Muslims in the United States be deported to their country of origin as national security threats.

Ron. Not one of your better ideas. Remember how FDR isolated all Japanese-Americans during WWII? Many were patriotic and served in the armed forces. Not all Muslims can be blamed for the evil of a few.