While Syria remains in turmoil, Iraq is afflicted with bombings, and Egypt addresses terrorism in its cities and the Sinai desert, Israel is an oasis of peace even though it continues to be rocketed from Gaza, the base for Hamas, a Palestinian faction that is in conflict with the Palestinian Authority.


The Authority has been led since 2004 by Mahmoud Abbas after the death of Yasser Arafat. Elected president in 2005, his term ended in 2009, but he has remained in that office by not holding any elections.


Despite the fact that Israel has been a steadfast ally of the United States and is the only nation in the Mideast that does not pose a threat to peace it continues to be an obsession with the United Nations that is devoted to the stateless Palestinians and has declared 2014 the UN Years of Solidarity with the Palestinian People.


Since its declaration of independence in 1948, Israeli efforts to secure any peace with the Palestinians have proven futile. Instead, it was immediately attacked by a coalition of Arab states, followed by wars in 1967 and 1973. It exists with threats of extinction by the Palestinian leadership and from Iran.


Journalist-in-resident at the Foundation for Defense of Democracies, Claudia Rosett, recently noted that “In the 1993 Oslo accords, the Palestinian Liberation Organization promised to recognize Israel’s right to exist, and resolve all outstanding issues of permanent status ‘through negotiations’. Instead, the Palestinian Authority has been reneging on this agreement, seeking a path to statehood by applying for, and getting, full membership in UNESCO in 2011, and enhanced status in the U.N. General Assembly in 2012, as a non-member Observer State.”


The efforts of the Obama administration ignore the fact that setting up an independent Palestinian state, one that would have control of the West Bank, would produce a disaster for Israel as a flood of refugees from neighboring Arab countries would arrive, throwing the territories into chaos and posing a huge security threat to Israel. In addition, Jordan has expressed opposition to such control.
The Palestinian Authority, created by the Oslo Accords, has enormous unemployment problems and so does the Hamas-controlled Gaza. Neither has the financial stability to maintain itself.


The “Arab Spring” that saw Egypt’s, Tunisia’s, and Libya’s despots deposed have declined into internal conflicts in these nations. Groups affiliated with al Qaeda and comparable movements have taken advantage by seeking to assume control. Syria is divided by many groups, some of whom oppose the jihadists. In Egypt, the threat of the Muslim Brotherhood (of which Hamas is an offspring), led the government to crack down on the organization.


Egypt’s former defense minister, Gen. Abdel-Fattah El-Sisi, resigned in late January in anticipation of running for president. Though the new constitution separates the two pinnacles of power, the army and the political executive, he would likely remain the most powerful leader, still able to continue the war on the Brotherhood to free Egypt from its grip. One of his goals is the remove the Palestinian Hamas rule in the Gaza Strip and this would be very good news for the Israelis. 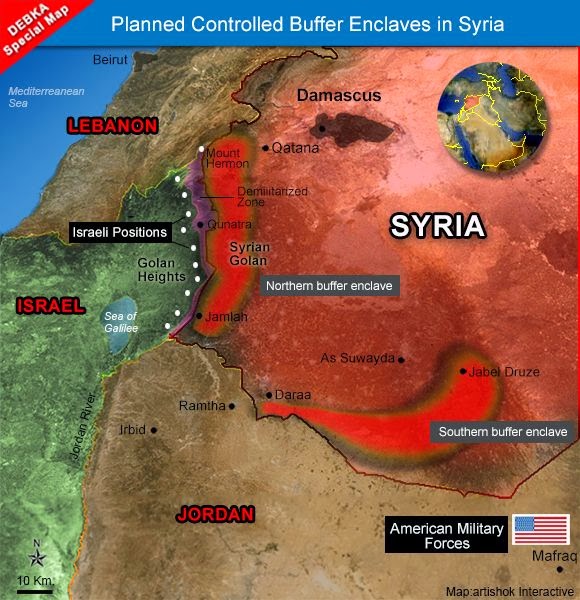 Meanwhile, the Israelis have been working with the U.S. to develop two security buffer zones that are taking shape in Syria. This involves the provision of U.S. small arms to local militias where some 180,000 Druse tribesmen live in 120 scattered villages. In Jordan, the U.S. has Special Forces helping, along with the Jordanians, to train Syrians opposed to the jihadists. A second buffer zone will include the Syrian-Golan border area to include Quneitra that has a population of around 300,000.


According to a news report by Israel’s DEBKA File, “The goal is to connect the two buffer zones as a safe haven and a stronghold in southern Syria for moderate Syrian opposition elements, safeguarded by U.S., Israel and Jordanian military support.


What remains a cancerous conundrum is the hatred directed at Israel by the United Nations, an international organization allegedly devoted to world peace. Not far behind it is the European Union and, of course, the whole of the Mideast region mired in a hatred that goes back 1,400 years thanks to Islam.


The Obama administration owes much to Israel for the assistance it has provided as it has tried to find a role in resolving or containing the Syrian conflict. Despite protestations of support, Israel cannot be blamed for being watchful of what the U.S. says and what it does. As in the whole of the Mideast, President Obama has squandered any trust the U.S once had.