A History of the Disastrous Global Warming Hoax 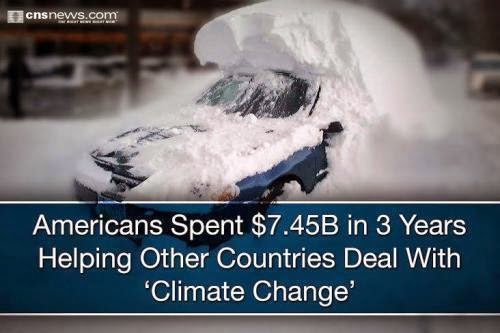 
“It is the greatest deception in history and the extent of the damage has yet to be exposed and measured,” says Dr. Tim Ball in his new book, “The Deliberate Corruption of Climate Science”.


Dr. Ball has been a climatologist for more than forty years and was one of the earliest critics of the global warming hoax that was initiated by the United Nations environmental program that was established in 1972 and the Intergovernmental Panel on Climate Change (IPCC) established in 1988.


Several UN conferences set in motion the hoax that is based on the assertion that carbon dioxide (CO2) was causing a dramatic surge in heating the Earth. IPCC reports have continued to spread this lie through their summaries for policy makers that influenced policies that have caused nations worldwide to spend billions to reduce and restrict CO2 emissions. Manmade climate change—called anthropogenic global warming—continues to be the message though mankind plays no role whatever
.
There is no scientific support for the UN theory.


CO2, despite being a minor element of the Earth’s atmosphere, is essential for all life on Earth because it is the food that nourishes all vegetation. The Earth has passed through many periods of high levels of CO2 and many cycles of warming and cooling that are part of the life of the planet.

“Science works by creating theories based on assumptions,” Dr. Ball notes, “then other scientists—performing their skeptical role—test them. The structure and mandate of the IPCC was in direct contradiction of this scientific method. They set out to prove the theory rather than disprove it.”

“The atmosphere,” Dr. Ball notes, “is three-dimensional and dynamic, so building a computer model that even approximates reality requires far more data than exists and much greater understanding of an extremely turbulent and complex system.” No computer model put forth by the IPCC in support of global warming has been accurate, nor ever could be.


Most of the reports were created by a small group of men working within the Climate Research Unit (CRU) of the University of East Anglia and all were members of the IPCC. The result was “a totally false picture supposedly based on science.”


The revelations of emails between the members of the CRU were made available in 2009 by an unknown source. Dr. Ball quotes Phil Jones, the Director of the CRU at the time of the leaks, and Tom Wigley, a former director addressing other CRU members admiting that “Many of the uncertainties surrounding the cause of climate change will never be resolved because the necessary data are lacking.”


The IPCC depended upon the public’s lack of knowledge regarding the science involved and the global warming hoax was greatly aided because the “mainstream media bought into and promoted the unproven theory. Scientists who challenged were denied funding and marginalized. National environmental policies were introduced based on the misleading information” of the IPCC summaries of their reports.


“By the time of the 2001 IPCC Third Assessment Report, the politics and hysteria about climate change had risen to a level that demanded clear evidence of a human signal,” notes Dr. Ball. “An entire industry had developed around massive funding from government. A large number of academic, political, and bureaucratic careers had evolved and depended on expansion of the evidence. Environmentalists were increasing pressure on the public and thereby politicians.”


The growing problem for the CRU and the entire global warming hoax was that no clear evidence existed to blame mankind for changes in the climate and still largely unknown to the public was the fact that the Earth has passed through many natural cycles of warmth and cooling. If humans were responsible, how could the CRU explain a succession of ice ages over millions of years?


The CRU emails revealed their growing concerns regarding a cooling cycle that had begun in the late 1990s and now, some seventeen years later, the Earth is in a widely recognized cooling cycle.


Moreover, the hoax was aimed at vast reductions in the use of coal, oil, and natural gas, as well as nuclear power to produce the electricity on which all modern life depends. There was advocacy of solar and wind power to replace them and nations undertook costly programs to bring about the reduction of the CO2 “fossil fuels” produced and spent billions on the “green” energy. That program is being abandoned.


At the heart of the hoax is a contempt for mankind and a belief that population worldwide should be reduced. The science advisor to President Obama, John Holdren, has advocated forced abortions, sterilization by introducing infertility drugs into the nation’s drinking water and food, and other totalitarian measures. “Overpopulation is still central to the use of climate change as a political vehicle,” warns Dr. Ball.


Given that the environmental movement has been around since the 1960s, it has taken decades for the public to grasp its intent and the torrents of lies that have been used to advance it. “More people,” notes Dr. Ball, “are starting to understand that what they’re told about climate change by academia, the mass media, and the government is wrong, especially the propaganda coming from the UN and the Intergovernmental Panel on Climate Change.”


“Ridiculous claims—like the science is settled or the debate is over—triggered a growing realization that something was wrong.”  When the global warming advocates began to tell people that cooling is caused by warming, the public has realized how absurd the entire UN climate change argument has been.


Worse, however, has been “the deliberate deceptions, misinformation, manipulation of records and misapplying scientific method and research” to pursue a political objective. Much of this is clearly unlawful, but it is unlikely that any of those who perpetrated the hoax will ever be punished and, in the case of Al Gore and the IPCC, they shared a Nobel Peace Prize!


We are all in debt to Dr. Ball and a score of his fellow scientists who exposed the lies and debunked the hoax; their numbers are growing with thousands of scientists signing petitions and participating in international conferences to expose this massive global deception.

A pity Ronald Reagan didn't expose The Great Global Warming Hoax back in the 1980s before it gained traction.

And Ronald The Great could have hit a trifecta, if only he had done away with the EPA.

The good news is that I doubt the next patriot president will pull any punches, since it would appear whoever is president can do anything, thanks to the groundwork done by Imperial President Obama.

I have likened the "global warming..er...Global cooling..err lessee global warming" to wealth distribution from the west to the developing countries. The only places that try to implement emission controls is the industrialized west. India, China and others pollute to their hearts content and nothing is said and we send them money and they use it for something else entirely.
I had wondered what had happened to all the soviet apologists that I used to see lambasting everything the west did and toadying up to the soviets. I would use the example "Breznev could eat a live puppy on stage and the apologist would come up with a reason why that is a good thing for the world."
After the soviet union folded, all these people needed a place to go and they glommed onto the environmental movement. I had noticed that the tone of the sierra club, and others changed in the early 90's. I call them "watermelons" Green on the outside and red in the middle. They are anti-capitalist and view the west as "evil" and have to pay for the sins of the past. I guess all that liberal indoctrination they got in college from Marxist professors have paid off. When people try to refute this I state..."What is the date on Earth Day?" It just so happens to coincide with Lenins birthday. They had 365 days to choose from and just happen to pick his birthday?
I don't know if a future president will be able to roll in the EPA, they have a lot of political capital and the democrats who need the tree hugger vote won't let that agency go in to the long goodnight.

Great read Alan, as always, debunking the Global Warming hoax, and it should be on all mainstream media around the world. I cannot understand why most msm and most Western adminstrations are supporting the Global Warming agenda, and not even investigating its flaws. Either because it offers a great tool for control and raising taxes . Or maybe because they are mental cases, even the Mayans thought they could control the weather by human sacrifices. It is really baffling how all critics of the Global Warming swindle have been silenced and instead every weather event, whether it had been storms, cold, heat or droughs, are being blamed on Climate change. We have to fight for the truthm because our freedom is at stake! TY Alan for all you do!