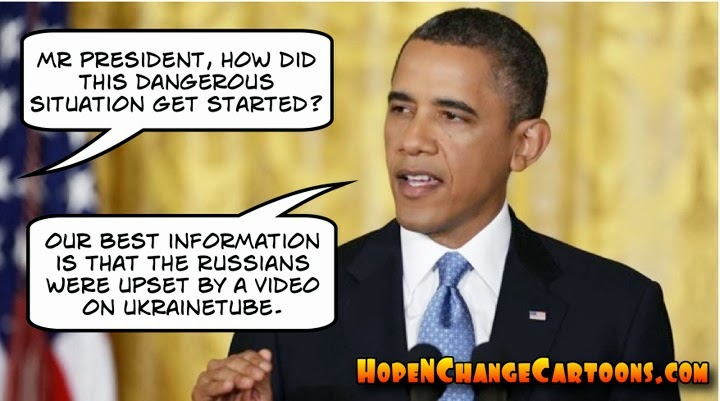 
After a series of events that continue the decline of America’s global reputation along with increasing questions about the level of Obama administration corruption within the Internal Revenue Service, these and other factors lead inevitably to the question of whether America can survive Barack Hussein Obama.


By March 12, a Wall Street Journal/NBC news poll indicated that Obama’s popularity had declined to an all-time low with 48% approval versus 54% disapproval. This is unchanged from December when the Obamacare rollout dominated the news. The rate of disapproval among Democrats stands at 20%.


The question of survival might sound absurd under normal circumstances, but there has not been anything “normal” about Obama’s first term in which he lied repeatedly to Americans to secure the passage of the Affordable Care Act—Obamacare—and then claimed that what he and Congressional Democrats said was an inadvertent misstatement of the facts. His namesake legislation has been a disaster from the beginning. Nothing about it works and it costs more while destroying the healthcare insurance system.


And he has continued to lie to the point where anyone above the age of five has concluded that nothing he says can be trusted. So, if he weren’t President, he could be fired, but he can’t. He can be impeached, but he won’t because Republicans tried that with Bill Clinton and it failed. So that leaves only the forthcoming November midterm elections as a means to curb his further destruction of the economy and all other aspects of life in America.


It is useful to keep in mind that Americans have survived hard times, from the long Revolutionary War to the Civil War through many financial crises and, of course, the Great Depression in the last century. In these and other hard times, many suffered, but the nation was sustained.


I know the headlines out of Wall Street continue to be good. The bankers and the investment crowd know how to turn a dollar, but there are scores of opinion pieces saying that the collapse of the dollar is eminent or that another financial crisis like the one in 2008 is just around the corner. For the record, the banks that survived that crisis, the ones that were “too big to fail”, were not only bailed out with taxpayer dollars, but paid it back and thereafter enjoyed enormous profits thanks to a Federal Reserve that charged no interest on the money it loans them.


On March 6, Wall Street Journal columnist Daniel Henninger opined that “Putin Carterizes Obama, Totally.”  I remember Jimmy Carter mostly for the lines I had to wait in to get gas for my car. Then there was the seizure of American diplomats in Tehran, Iran in 1979.  Every day since then the Iranians wake up crying out “Death to America. Death to Israel” and they mean it. So with whom is Barack Obama and his idiot Secretary of State, John Kerry, “negotiating”? The same Iranians. You know, the ones who were shipping dozens of Syrian-made surface-to-surface rockets to the Palestinians in Gaza until the Israelis boarded the ship in the Red Sea last week and put a stop to that. The same ones he relieved of the sanctions regarding their nuclear weapons program.


What makes me ask the question about survival is the way the ideologies that Obama believes—Communism, Islam, and his ability to influence other nations—blind him to reality. Thinking that diplomacy will get the Iranians to stop their quest to build their own nuclear weapons isn’t just stupid, it’s insane.


It’s the same with his views of Russia and its president, Vladimir Putin. Having “re-set” the former Cold War relationship with Russia, Obama has just discovered that Putin has not. Given the political turmoil in Ukraine, Putin did what all of his predecessors did for hundreds of years; he decided to take control of the Crimea. Why not? Russia has essential shipping ports there and some airfields. The Crimea was part of Russia for hundreds of years. Putin knows that Obama will not go to war over these events. He wouldn’t even take on Syria when it used poison gas.


Obama’s weakness and his policies that weaken America economically and militarily have not gone unnoticed around the world.


It’s hard to win wars with stateless fascist Muslims that call themselves al Qaeda and other names. Throughout the Middle East, despite their increase in numbers, the states there are trying to fight them. The Taliban will regain Afghanistan about a week after we leave while Egypt has allied with Russia after Obama backed the Muslim Brotherhood. A third of Iraq is now controlled by al Qaeda. Saudi Arabia, Bahrain and the United Arab Emirates just withdrew its ambassadors from Qatar for backing the Muslim Brotherhood. It is home to al Jazeera, the television channel.


At home the Environmental Protection Agency continues to play havoc with the economy and, in particular, our need for electricity with its “war on coal.” It is undertaking a regulatory storm to control all aspects of our lives.


The question of whether America can survive Obama is not inconsequential.


He’s all for same-sex marriage, the legalizing of marijuana, and forcing people to violate their strong moral and religious convictions. He keeps talking about jobs but there are millions unemployed and millions on government welfare programs. The nation’s economy has gotten worse since Obama was elected in 2008 to fix it. And he prefers to rely on executive orders than to work with Congress.


Elections have consequences. Let’s hope the voters keep that in mind in November.

Can America survive Obama? Yes, we most certainly can... The indomitable spirit of the America people can overcome ANY tragedy, act of war or terrorism thrown at us... We can survive..

The BIG question is; what can we do to overcome the long-term damage that Obama has wrought? What must we do to get America back to being a land of prosperity and freedom and not one laughed at for *the strongly worded letter*..

The short answer is to develop our vast energy reserves.

Federalism and restoration of the constitution have to be the key goals of the gop. Federalism will at least permit conservatives and liberty to survive and thrive in some states. The gop has to be purged of the big gov rinos and conservatives have to relentlessly attack lefty dominated institutions through creative destruction to deprive lefties of their power and economic bases. Targets include public unions, academic, network TV, public school unions, etc.

The larger question is, "Can the WORLD survive Obama?"

Yes, but only after a major reset.

For details read the last chapter of "Atlas Shrugged" by Ayn Rand - when America goes down, the global order goes down with her.