Why Government Does Not Function 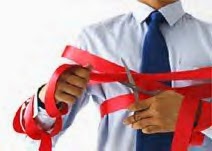 Do you have the feeling that we no longer have government from the federal to the local level that is able to function because of vast volumes of laws and regulations that have made it impossible to do anything from build a bridge to run a nursing home? If so, you’re right. The nation is falling behind others who do a better job by permitting elected and appointed officials to actually make decisions. We are living in a nation where lawsuits follow every decision to accomplish anything.


This is the message of Philip K. Howard in a book that everyone concerned for the future of America should read; “The Rule of Nobody: Saving America from Dead Laws and Broken Government” ($23.95, W.W. Norton).


It explains why we can elect a Representative or Senator, send him or her to Washington, D.C. and still see no progress. Instead, we get the Affordable Care Act—Obamacare—that began as a 2,700-page law that has already metastasized into regulations that, stacked up, stand seven feet tall! And more on the way. It has destroyed the healthcare insurance industry and is destroying the U.S. healthcare system.


“The missing element in American government could hardly be more basic. No official has authority to make a decision. Law has crowded out the ability to be practical or fair,” says Howard. “It’s a progressive disease. As law grows to fill the vacuum, the wheels of government go slower every year.”


Howard points to a variety of problems that nation is encountering. “America’s electrical grid is out of date—transformers, on average, are about forty years old, and not digitized.” As vital and essential as the grid is to all life in America, “there’s no active plan to rebuild America’s electrical grid. The main reason is that government cannot make the decisions needed to approve it.”
Citing proposals that would allow the Bayonne Bridge to permit the new generation of large container ships clearance that would enable the Port of Newark to remain competitive, it took three years for environmental reviews to clear the project, but as Howard notes, “the average length of environmental review for highway projects, according to a study by the Regional Plan Association, is over eight years.” Eight years!

“Government on legal autopilot,” says Howard, “doesn’t have a chance of achieving solvency. In 2010, 70 percent of federal tax revenue was consumed by three entitlement programs—Medicare, Medicaid, and Social Security—that don’t even come up for annual congressional authorization.”


Americans are in general agreement that Big Government is a big problem, but did you know that more than twenty million people work for federal, state and local government—or one in seven workers in America. Their salaries and benefits total more than $1.5 trillion of taxpayer funding each year or about ten percent of the Gross Domestic Product. Cities in America are declaring bankruptcy because they cannot afford the retirement and other benefits that their employees receive. State budgets are comparably weighed down.


We read about the often incomprehensible results and costs of the legal system affecting all levels of government. “Up and down the chain of social responsibility, responsible people do not feel free to make sensible decisions,” says Howard. “Everything is too complicated: rules in the workplace, rights in the classroom, and machinations in government. We’re bogged down in bureaucracy, pushed around by lawsuits, and unable to steer out of economic and cultural storms.”


“The point of regulation, we seem to have forgotten, is to make sure things work in a crowded society.”


What is forgotten or never learned is that there are elements of risk in everything we do. Trying to legislate risk out of our lives only leaves us with millions of rules that make it impossible to function intelligently in business, in schools, in hospitals and nursing homes, and everywhere else. It eliminates swings and seesaws from playgrounds out of fear of lawsuits.


“America is losing its soul,” says Howard. “Instead of creating legal structures that support our values, Americans are abandoning our values in deference to the bureaucratic structures.” Too often, decisions made by elected officials or reflected referendums voted upon by the public have been taken over by the court system in which judges now feel free to decide these matters. The response was a growing objection to “judicial activism.” Now even the judges are distrusted.


Howard’s book explains why America is in trouble and offers recommendations to put it on the right path again. If it is ignored, the America into which I was born more than seven decades ago will not be around or livable for the next generation or two of Americans.

That is why we badly need tort reform in this country. As in Great Britain, if you sue someone and lose you are responsible for all costs, on both sides, including legal fees and court costs. That stops the problem of frivolous lawsuits.

It always upsets me when I hear Social Security and Medicare are called entitlements.

They are not entitlements!

I worked and paid for both over my 55 year working career.

Entitlements are welfare, Medicaid and food stamps, which is not paid for by the people receiving those benefits/entitlements.

You're right, Michael, and both are mandatory. Even welfare is not an entitlement. Politicians have twisted the meaning of the word.

And it doesn't look like there will any change in the foreseeable future either.

Hope this isn't repeated as it looks like there is no change in the foreseeable future.

I have recently read where three 'entitlements' take up 70% of the federal budget, Social Security, Medicare and Medicaid, which is inaccurate...it's closer to 45%. However, my question for the last thirty years has been this. Why is Social Security a budgetary item in the first place? There is a special tax collected to cover those costs. It’s a budgetary item because ever since the Democrats under Johnson began raiding the SSI fund it became bankrupt. It's a budgetary issue because it has to be.

The reason this government no longer works is because ‘progressives’ passed the 16th and 17th amendments in 1913, giving absolute power to the central government, and they’re using it.

In 2013 there was an average of 56 new federal regulations resulting from each law passed totaling 3659 new laws called – “rules”! That multiplier has been as low as 12 per new law, but that was in 2006 when Congress passed 321 new laws. If you average out the multipliers over the last ten years the average multiplier is 25.36.

So what’s the rest of the story? Last year the states passed over 40,000 new laws. If we make a broad assumption that the average multiplier applies to the states we now have a potential of 1,014,400 new laws called – “rules!” Rules created by unaccountable bureaucrats, with their own agendas and views of reality, and who, generally speaking, went to college and then into government.

Not only does government not work, it’s attempting to make sure no one works, and if anyone should try they will find that whatever they’re doing will be illegal.

What has been legislated OUT are what used to be called 'common sense' and 'take NO for an answer' which was instilled in me by my WWII era parents. Now, you KNOW there are too many 'rules' when little kids get 'arrested' for hugging another or turning their toast into the shape of a 'gun'. But what can be said about a 'civil society' which is beginning to allow children to 'pick their gender' or drunk urinating teenagers on the internet? Where's that reset button when you need one? Oh yes...it didn't work.

I think of Alan as a latter day Edward Gibbons telling us in detail of the coming collapse of the American Empire.

Indeed, empire it has become under Obama - a highly centralized state on the European model run by elite politicians and grey little bureaucrats in their millions who lord over the lives of We The People.

The "good" news is that the "Great Reset" is coming in the form of economic collapse, or WW III, or CW II, or foreign invasion by Russia/China, or perhaps all four, one right after the other.

Afterwards I'm sure someone will raise a tiny American flag in the howling wilderness of ruins in one of our burned out major cities and say, "Hey, I think we won!"