Is There Anywhere Safe to Be a Jew? 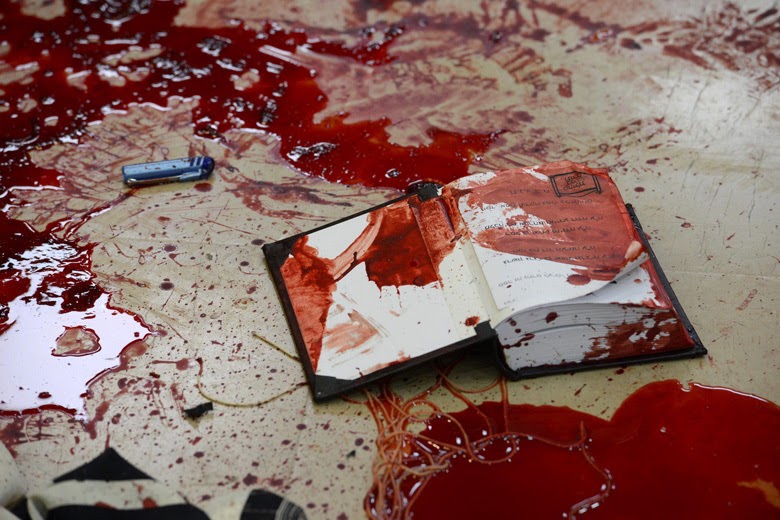 
One might think that being a rabbi praying in a synague in an ultra-orthodox neighborhood of Jerusalem, Israel was about as safe as one could get, but you would be wrong.


Jews, no matter where they are, understand they can be attacked and killed for being Jews. It is the price of their Covenant with God (Exodus, Chapter 12). This has been part of the history of Judaism for three millennia. In the last century it manifested itself as a Nazi genocide that killed six million European Jews and in this one it is the continuation of an Islamic war on Israel.


On Tuesday, November 18, two Palestinians, armed with a rifle and butcher knives, killed three American-Israeli rabbis, a British-Israeli rabbi, and a police officer. They injured seven others. The synague isn’t even close to the line that divides the Jewish and Arab sections of the city.  In recent months Jerusalem has been the scene of a number of attacks attributed to Muslim anger regarding the desire of Jews to pray on the Temple Mount, a holy site on which a mosque, al-Aksa, was built following the Arab conquest of the city in 637 A.D.


News of Tuesday’s killings was celebrated in the streets of Gaza and no doubt elsewhere. While condemning the killings, President Obama also managed to blame Israel for building housing for its citizens. Why he thinks he has the right to tell the Israelis where and how much housing can be built is testimony to both his arrogance and his enmity toward the Jewish State.


Palestinian Prime Minister Mahmoud Abba condemned the killings in one breath and incited more hatred with the next, claiming that Jews had “contaminated” the Temple Mount where Abraham’s faith was tested by God.


From its independence in 1948 to the present, Israel has been attacked in wars and with organized terror campaigns called intifadas. The Palestinians rewarded the Israeli decision to turn the whole of Gaza over to them in 2005 by rocketing it ceaselessly from there until the Israelis conducted a military operation in June to bring a stop to it. In the process, they discovered dozens of tunnels intended to be used by terrorists to attack Israelis.


The Palestinians have been given many opportunities to have peace with Israel but they have never chosen to embrace it. American efforts by several Presidents have all failed. There are two Palestinian groups that claim governance or representation, the Palestinian Authority located on the West Bank and Hamas in Gaza.
The answer why is perhaps best found in the Hamas founding document. Proclaimed in 1988, it calls for the creation of an “Islamic state in Palestine in place of Israel and the Palestinian territories, and the obliteration or dissolution of Israel.” How is that to be achieved? Victory is defined as “killing the last Jew on earth…”


The murderous nature of Islam was highlighted in the latest Global Terrorism Index published by the Institute for Economics and Peace. CNS news reported that “The number of people killed by terrorists worldwide in 2013 rose by 60 percent compared to the previous year—from 11,133 to 17,958—with four Sunni Muslim extremist groups responsible for two-thirds of all fatalities…”


The Middle East was the region where most of the killings occurred and it should be noted that Christians for whom the region has been home for millenia have been also been targeted in the same fashion as Israel's Jews.


In a broader context, the level of anti-Semitism has been increasing in recent years and, despite the horror of the Holocaust during World War II, it is particularly evident in Europe. The increased Muslim population in European nations may have something to do with that, but it is also clear that the hostility toward Jews is evident in its non-Muslim population. It is not an exaggeration to say that one can find anti-Semitism virtually anywhere in the world, even in nations where there is no perceptible Jewish population.


The two Palestinians who perpetrated the attack were killed in a police shootout. In a November 19 editorial, The Wall Street Journal opined that “What Israel needs now is confidence that the U.S. will not reward these acts of jihad by browbeating Mr. Netanyahu back into negotiations with Mr. Abbas.”


“The best way to prevent another intifada is to reassure Israel that the U.S. supports its self-defense, while warning Palestinians that they will never have a homeland as long as they cultivate a society that celebrates murdering the innocent in the name of religion.”


The Palestinians are not members of a sovereign state and never have been. The closest one gets to one is Jordan which is home to many Palestinians. Other Middle East nations have not assimilated the Palestinians, often keeping them in camps for generations and denying them any vestige of citizenship. They are the oldest refugee group of the modern era, but those who chose Israeli citizenship enjoy the rights of all Israelis. According to Israel’s Central Bureau of Statistics, the Arab population in 2013 was 1,658,000!


Jews are members of the oldest monotheistic religion on Earth. Judaism birthed a breakaway religion called Christianity which incorporates the Old Testament with the New, and about 1,400 years ago Mohammad declared he was the newest and last prophet. He proclaimed Islam, an amalgam of the first two religions and the paganism of his Arab culture.


In 1948 Jews resurrected Israel and restored it as the Jewish state. Killing rabbis and other Israelis will not change that, something that Muslims antagonistic to Israel refuse to understand, but they also don’t understand why having two distinct and warring sects claiming to be the only true Islam, Sunni and Shiite, nor killing each other doesn’t make a lot of sense either.


Are Jews safe in Israel? No more than on any other inch of planet Earth.