Is John Kerry a Moron? 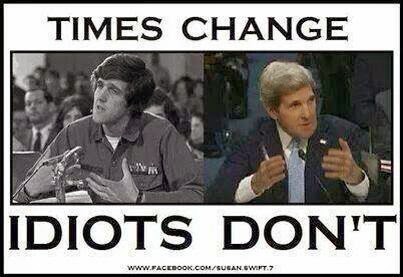 
I can recall John Kerry, Obama’s Secretary of State, from the days he testified to a congressional committee and slandered his fellow soldiers as the spokesman for Veterans Against the Vietnam War in 1971. I was appalled then and my opinion of the man has not changed since those days. I opposed the war, too, but I did not blame it on the men who were conscripted to fight it, nor did I believe the charges he leveled against some of them.


These days Kerry is engaged in securing an agreement with the Iranians, if not to stop their program to make their own nuclear weapons than to slow it to a later date. Never mind that the Iranian government is listed by our own government as a leading sponsor of terrorism worldwide or that they have signed such agreements in the past and then tossed out the inspectors.


Kerry is convinced that the Obama administration can get an agreement that is, in his own words, “not legally binding”, nor is it a treaty that the U.S. Senate would have to vote for or against. In point of fact, President Obama can make the deal—sign the agreement—just as Presidents have done for over two hundred years. It can then be abrogated by whoever the next President will be.


Why Obama and Kerry are doing this defies my understanding. It gives the Iranians more time to reach nuclear capability. It is opposed by every nation in the Middle East. It puts every nation within reach of Iran’s missiles at risk and it virtually guarantees the destruction of Israel, a goal of Iran’s Islamic Revolution from the day it was born. Kerry is negotiating with people who took our diplomats hostage in 1979 and have played a role in the deaths of many Americans since then.


Is John Kerry a moron? I think so.


I asked myself this question in regard to another area of U.S. policy which the Secretary of State is also championing even if millions around the world have concluded otherwise.


Kerry said, “So when science tells us that our climate is changing and human beings are largely causing that change, by what right do people stand up and just say, ‘Well, I dispute that’ or ‘I deny that elementary truth’?”
The problem with this is that human beings are not causing the planet’s climate change. Forces far greater than humans are involved, not the least of which is the Sun.


As for science, its most fundamental methodology is to constantly challenge the various ‘truths’ put forward as theories until they can be proved to be true by being independently reproduced. Nothing about the “global warming” theories has been true. All of the computer models on which it was based have been proven inaccurate. In some cases, they were deliberately rigged.


On television meteorologists remind us that every day, indeed, from morning to night, the temperatures of the area about which they are reporting are in a constant state of change. They show us satellite photography and mapping that demonstrates how dynamic the weather is on any spot on Earth. The climate, however, is measured in decades and centuries. Every one of the doomsday predictions of the global warming “scientists” and propagandists have been wrong.


The enemies of the use of energy to enhance and improve the lives of the residents of Earth began to claim in the 1970s and 80s that carbon dioxide (CO2) was threatening the climate.


At best, CO2 is a very minor element of the Earth’s atmosphere, about 0.04%, which gets it rated as “a trace gas.” As such, it plays no role with regard to the climate.

Kerry asserted that climate change is “one of the biggest threats facing our planet today” and should be ranked with terrorism, epidemics, poverty and nuclear proliferation…” Oh, wait! Isn’t this the same Secretary of State negotiating with Iran to allow it to become a nuclear power?


And what “solution” does he offer to reduce the “threat” of climate change? Kerry urged that the U.S. transition away from “dirty sources of energy” such as coal, oil and natural gas.


Fossil fuels have made the difference between modern life and burning cow dung to cook dinner. A billion people on Earth still do not have electricity.


Less obvious, but significantly more threatening is the White House effort to get the U.S. signed up for the United Nations Framework Convention on Climate Change and its International Climate Justice tribunal. This is a follow-up to the 1977 Kyoto Protocol that was unanimously rejected by the U.S. Senate. Why? Because such treaties threaten the sovereignty of the U.S. and, just as importantly, because the entire United Nation’s climate program is a huge fraud.


This is what John Kerry wants the U.S. to agree to, just like the Iran deal, and just to be sure the U.S. Senate, as mandated by the U.S. Constitution, doesn’t have a say in it, he and the President are calling these deals anything other than a treaty.


Is John Kerry a moron? Maybe not as dumb as he seems to be, but surely cynical and devious.


Unfortunately, he is the Secretary of State.

Not (just) a moron, but a deluded fanatic, just like Obama, his coalition of radical activists, the entire Democratic party--and the academic "consensus" on the global climate. You can't deal with them any more than you can with Muslim jihadists. They are totally committed--religiously committed--and they even have their own term for "unbelievers": "Deniers". They use that euphemism to hide their own religious dogmatism from everyone (most especially, from themselves).

I’ve given this a lot of thought because he’s so strange. Clearly his decisions are moronic, and to leave the Senate where he could be Johnny U-Turn all day long without the citizens of the Soviet Socialist State of Massachuetts getting one bit upset and leave to become Secretary of State is even stranger.

Why I wondered! I think I have the answer.

I think in his ego driven life he delusionally believes he would have been a great president and was cheated by the American people when they elected Bush. So this was his last and only opportunity to show America and the world what we all lost! And all he did was to demonstrate his ego is so large there’s no room for intellect. And now he’s sunk even lower than he was before.

Alan, would you please write an article about the GAO announcement that the government wastes over $125 billion each year in unwarranted SS & Medicare benefits. This comes at the same time they are talking about raising the debt limit.
Cut waste, cut government spending!
Thanks

@ AB: Thanks for the suggestion. I should write about this but have little data on hand. Will have to research it.

Yes, he is an exasperating, embarrassing Bozo.