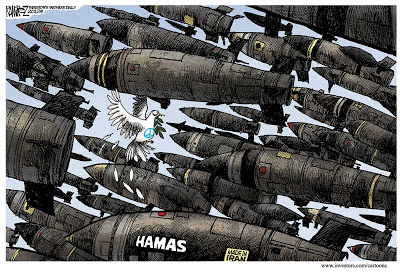 
While everyone welcomes a cease fire between Hamas in Gaza and the Israelis, no one should expect it to last very long or that relations between the two will change. In point of fact, the Israelis struck a bargain with terrorists, not a nation-state.


Reflecting on the cease fire, David Singer, a lawyer, noted that “The document is not an Agreement, but merely an Understanding” and that “the parties to the Understanding are not specifically identified, nor has the document been signed by any parties that are supposed to be bound by the Understanding.” At best, the “Palestinian factions” who have the greatest interest in attacking Israel are not a party to the cease fire, nor is al Qaeda or Iran for whom Hamas is a proxy in Gaza as Hezbollah is one in Lebanon.


Israel has merely bought some time in which to determine what it will do next. Time is running out, not just in Gaza, but with regard to Iran’s nuclear program, deemed by observers to be mere months from being able to put a nuclear warhead on a missile and send it hurtling toward Israel to kill millions of its citizens and essentially destroying it as a viable nation.


If there is any good news out of the recent conflict, it is that its “iron Dome” defense system against rockets worked remarkably well. The bad news is that its enemies have learned that it can be overwhelmed if enough rockets are fired at the same time. Moreover, Iranian rockets have the capacity to hit Tel Aviv and Jerusalem.


Daniel Pipes of the Middle East Forum had some reflections on the Hamas-Israel hostilities, noting that “The old Arab-Israeli wars were military clashes; the recent ones are political clashes. The wars of 1948-49, 1967, and 1973 were life-and-death struggles for the Jewish state. But the wars of 2006, 2008-09, and now 2012 are media events in which Israeli victory on the military battlefield is foreordained and the struggle is to win public opinion.”


In the U.S. evangelical Christians are the largest group of supporters for Israel. Among those with far less sympathy for Israel are a significant percentage of Democrats and the first term of the Obama administration made it clear that the President is no friend to Israel. At one point he called for a return to the 1967 borders and opposed housing construction in Jerusalem. Dispatching Secretary of State Hillary Clinton to engineer a cease fire ensured that the U.S. would not be drawn into the conflict.


Many have expressed surprise that Egypt would take a significant role as a mediator, but few missed the fact that the U.S. was in a position to withhold $1.5 billion in foreign aid to Egypt whose economy is in serious trouble. Mohamed Morsi, Egypt's president has been traveling far and wide in the Middle East to secure aid, including from the Saudis, a leader of the Sunni majority of Islam, and always the hidden hand influencing events in the region, as well as the nation most fearful of the Shiite nation Iran.

Morsi has been walking the thin edge of a sword and a November 21 New York Times article spelled It out:


Read More...”Both sides in the conflict appear to be testing Egypt’s new leader. Hamas, the Islamist Palestinian offshoot of Egypt’s Muslim Brotherhood, is wondering how much support it may draw from its ideological cousins now that they control the Egyptian state, while Israel’s hawkish leadership seem to probe the depth of Mr. Morsi’s stated commitment to the peace treaty as well.”
“For Mr. Morsi, the test is forcing him to reconcile conflicting elements of his own persona: as the Islamist firebrand who has denounced the Israelis as ‘vampires’ for killing Palestinian civilians and lauded Hamas for resisting an illegal occupation, but also as the newly elected president promising stability, economic revival and friendly relations with Israel’s Western allies.”
Despite the Times reference to “an illegal occupation”, the fact is that Israel withdrew from Gaza in a “land for peace” effort that has clearly failed. Israel does not illegally occupy land that is rooted in the millennia of its existance.
Dr. Pipes reflected on the timing of Hamas’s ramping up of rocket attacks on Israel that had been going on for months. He conjectured that the last attacks were to “test the waters in the aftermath of Barack Obama’s reelection”, to “rouse public opinion against Israel and make it pay a price internationally”, “refute accusations by Palestinian Islamic Jihad that it has abandoned resistance”, and remind the Palestinian Authority, as it seeks statehood at the United Nations, who controls Gaza.”
The effort of Fatah, based in the West Bank after having been driven out of Gaza, to secure statehood went nowhere in the U.N. Indeed, the so-called Palestinians have never had anything but rhetorical support and have been dependent on a U.N. refugee agency for actual support. They constitute the oldest unresolved refugee population in the world.
In August 2010, The New York Times reported on a survey by Al Arabiya television network in which “a staggering 71 percent of the Arabic respondents have no interest in Palestinian-Israeli peace talks.”
It noted that “For example, it was common knowledge that the May 1948 pan-Arab invasion of the nascent state of Israel was more a scramble for Palestinian territory than a fight for Palestinian national rights” and that “from 1948 to 1967, when Egypt and Jordan ruled the Palestinians of the Gaza Strip and the West Bank, the Arab states failed to put these populations on the road to statehood.”
So, yes, while it’s a good thing that the rockets are not flying, the “Iron Dome” proved successful, and the Israeli Air Force was able to kill some of the militant leadership and degrade its arsenal and ability to proceed to some degree, the current cease fire is a largely meaningless “understanding.”
What remains to be understood is the unremitting hostility to Israel that exists throughout the Middle East and globally where anti-Semitism has existed for centuries. The Israelis have merely bought some time until the next attacks.
The wild card remains Israel’s need to attack Iran’s nuclear and military facilities. Only by inflicting major damage will Israel have any chance of survival. Long a nuclear nation, Israel must stop Iran from becoming one.
© Alan Caruba, 2012
Posted by Alan Caruba at 11:54 AM

"...the May 1948 pan-Arab invasion of the nascent state of Israel was more a scramble for Palestinian territory..."

I think Americans need to learn more, much more, about the nature and the extent of the cracks, large and small, between Islamic factions.

Here's how you handle a cease-fire with Pallies; 1 minute until the cease-fire takes affect you NUKE EM...

Then you just sit back and watch..

Mr Caruba, by far you give us the most balanced state of things in the mideast. In South Africa, with a criminal cummunist, terrorist regime, the in depth news is non excisting. I can only hope on our alike thinker in Israel, Bibi Nethanyahu, to wipe these terrorist scum of the face of the earth. It's possible. The muslims are the weirdest people on earth and by now it's clear that you cannot trust one of them. They started the current conflict, but as soon as they are punched, they cry and call upon the UN to solve what they did wrong. Again, your blog is very well read in SA!

Thank you, Whiteson. I do what I can. I am pleased to learn I am read in South Africa.

The fact that the United States now relies on Israel to stop Iran from becoming a nuclear nation shows how far down Obama has already taken us. We are no longer the dominant world leader and we are soon to become vulnerable to attack by a country that considers us the Great Satan and is hell bent to destroy us.

Israel should have gone in and finished the job of decapitating Hamas. But of course that is easier said than done. As long as Islam has such an influence in the Middle East there will never be peace.