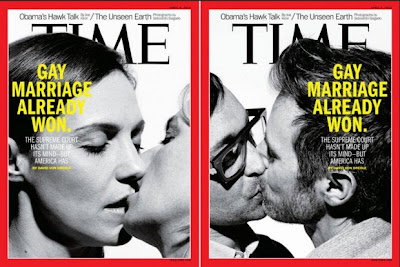 
An America that abandons thousands of years of tradition and common sense is an America that has set itself firmly on a path toward decline. That is the central issue of gay marriage that the Supreme Court will struggle to determine. A similar experience in social engineering gave us the federal protection of abortion and the murder of an entire generation of the unborn.


What we are witnessing is the tyranny of a determined minority, gays, lesbians, and transsexuals in America, barely three percent of the population, demanding that their particular sexual orientation should be codified in law by redefining marriage for everyone else. This isn’t about equality. It’s about special privileges and the destruction of marriage as solely between a man and a woman.


Imagine if the court had agreed with the early Mormon Church and established polygamy as the law of the land? In 1890, the Supreme Court ruled in The Late Corporation of the Church of Jesus Christ of Latter-Day Saints v. United States that “the organization of a community for the spread and practice of polygamy is, in a measure, a return to barbarism. It is contrary to the spirit of Christianity and of the civilization which Christianity had produced in the Western world.”


The Tenth Amendment states that “The powers not delegated to the United States by the Constitution, nor prohibited by it to states, are reserved to the states respectively, or to the people.” If the Supreme Court strikes down the decision of voters in California to prohibit gay marriage, it will have to ignore the Tenth Amendment. At this point in time, 41 States have passed laws protecting traditional marriage.


As one observer noted, if gay marriage is deemed legal by the Supreme Court, what would prevent the North American Man/Boy Love Association from demanding that their claim that sex with children is valid?


A rational society must have rational laws and the Constitution, which limits the powers of the federal government, makes it clear that the states have the right to determine their own response to such issues. Throwing overboard centuries of English law and the Constitution to favor gays and lesbians opens the doors to an “anything goes” society.


As a March 27 Wall Street Journal editorial noted, “The Supreme Court wrapped up its second day of oral argument on a pair of gay marriage cases Wednesday, and the Justices on the left and right seemed genuinely discomfited by the radicalism of redefining the institution (of marriage) for all 50 states.” Make no mistake about it, the demand for gay marriage is radical and would transform our society from one that has respected thousands of years of tradition and practice to one that abandons a religious and cultural norm to one that undermines society.


The cases before the Supreme Court arrive at the same time the nation has reelected a President who made clear that his objective is to “transform” our society from one that became a superpower based as much on its moral leadership as on its military and economic strength. The result thus far has been to impose a huge debt that will impact generations to come, undermines our ability to project strength, and threatens the value of the dollar. The Obama administration is currently trying to deprive Americans of the Second Amendment right to own firearms in the event a tyrannical government should occur.


The result, not surprisingly, has been an increase in the use of nullification by the states as they pass laws making it clear they do not intend to implement Obamacare as in the case of Indiana, South Carolina, and others. Six state legislatures already have bills filed that would prohibit cooperation with any attempt to indefinitely detain people without due process under a provision of the NDAA.


Several states, including Wyoming, will consider blocking any federal actions violating the Second Amendment. Florida, Indiana, and Missouri will look at legislation prohibiting spying by domestic drones. The Tenth Amendment Center has developed a legislative tracking page on its website because of this growing movement to resist federal mandates.


Sexual mores, the devaluation of our currency, and the general decline of moral values has plenty of precedent in history, most notably the decline of the Roman Empire. America fought a Civil War over the moral issue of slavery, ending it. It granted the right to vote to women. It stumbled badly with Prohibition, but abandoned it. All central governments tend to over-reach.


The Supreme Court’s decision on abortion is now being resisted as states begin to pass legislation to limit this practice in order to protect the lives of the unborn.


The President and other politicians who favor gay marriage, supported by a liberal media, will not have the last word. This is not about equality. It is about fundamental morality and, should America abandon that, it will cease to be a great nation no matter what path other nations may take.

The "gay rights" movement may be a front line in that conflict at the moment, but surely it is just another skirmish in the larger war.

By the way, I often think that the theme song from the "Malcolm in the Middle" TV series, sung to God, would make an appropriate anthem for the latter group: "You're not the boss of me now... and you're not so big."

We live at the end of an era: the fall of the Western Civilization. And this decadence is just one sign of it. There are so many others. Electing, and re-electing a man like Obama, is another.
The idea that gays are "forbidden" to marry is of course nonsense. By nature, they cannot marry. Marriage is by nature a comprehensive union, that because it is aimed at the creation and education of children, must be permanent and exclusive. Society as a whole has an interest in successful marriages. It is not just a private matter as gays want us to believe. Marriage as an institution, as just defined, is essential for a healthy society with a healthy future. That is why society recognizes "marriage", and does not recognize sexual or not sexual relations that are different. Duh!

The primordial sin was that Adam and Eve bought the devil's promise that they would be able to know or determine good and evil independently of God. It is interesting to note that in spite of all the rhetoric about gay marriage being a right, they never say it is a God given right. They think they can shake their fists at God. All that is left is the systematic persecution of those who don't get in lock-step with the new world order.