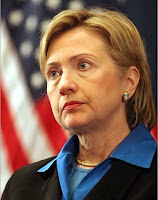 Am I the only one who thinks that speculations and predictions about whether Hillary Clinton will run for the presidency in 2016 are premature?

A nation that had eight years of the Bill Clinton administration, her years (2001-2009) being a Senator from New York, and four years of her serving as Obama’s Secretary of State may just be a little tired of hearing about Hillary Clinton at this point and the prospect of a Hillary presidency may be just too much to take except for those so besotted by the Clinton’s liberal aura.

A lot will depend on the outcome of the 2014 elections and if there is a shift in power from Democrat control of the Senate and increase of Republicans in the House—leaving Obama as a very lame duck—Hillary will likely read the writing on the wall. She was considered a shoe-in for the presidency in 2008 until a virtually unknown first-term Senator won the election. Her appointment as Secretary of State was intended to keep her wing of the party inside the tent.

As a recent Washington Post article, “Hillary Clinton’s Legacy of Mismanagement Abroad”, was a scathing review of her failures by the largely liberal newspaper that continues to distance itself from the Obama administration. It listed ten significant failures from the Russian “reset” to her inability to secure a status-of-forces agreement with Iraq. Hillary touted Syria’s Bashar Assad as a “reformer” and, of course, there is the Benghazi scandal in which the U.S. ambassador’s pleas for greater security were ignored, resulting in his death at the hands of al Qaeda terrorists. Her response to the ambassador’s assassination, “What difference does it make?” would come back to haunt her.

By any measure, her service as Secretary of State is a warning against a second President Clinton.

This is not to dismiss the Democrat’s capacity for self-delusion when it comes to selecting its next candidate for the presidency. The never-ending Obama campaign machine will be at her disposal, but Hillary is no spring chicken and the physical toll of the campaign will quickly become evident if she chooses to run.

Then, too, there was the aborted effort during her husband’s term to impose a health care program that resembled Obamacare. It was rejected and Obamacare is losing public support (if it ever had any). When it is fully implemented in 2014, the backlash will be enormous in purely political terms. Many states have refused to implement the “exchanges” and the rise in the costs of insurance premiums, bureaucratic denial of medical services (particularly for the elderly) will severely harm any run for the presidency she might contemplate.

There are so many things that could derail a Hillary candidacy that the current speculation should be taken with a grain of salt. The only good news for her at this point is Vice President Joe Biden’s presidential ambitions. The man is a walking gaff-machine, saying more stupid things in an hour that any Democrat opponent in a month.

Meanwhile, over in the Republican camp, there are a number of rising stars who are contemplating a run in 2016, but the one I regard as having the least chance is Jeb Bush, the former Governor of Florida. The reason is simple. His name is “Bush” and the idea of a third Bush presidency may not sit well among a new, growing cohort of younger Republicans. There is something about family political dynasties that is antithetical to the way American politics should be practices.

It is too early, as well, to speculate about who the Republican candidates will be in 2016. Events could intervene to affect the outcomes for both Hillary and the GOP hopefuls. The political demographics, however, favor a younger candidate than an older one. As noted, much depends on the outcome of the 2014 midterm elections.

A Hillary presidency is likely to be an extension of the Obama presidency and that has not served the nation well. The huge national debt is beginning to penetrate the dull minds of liberals, the “sequester” has generated many news articles and reports about the government’s enormous waste of taxpayer dollars. Rising prices of everything are affecting Americans, no matter their political orientation. Foreign policy will be affected by events in the Middle East and elsewhere. None of this bodes well for a Hillary run for the presidency.

So Hillary, if she would run for the Democratic Party nomination, would do so with an enormous amount of political “baggage.”

Alan, it will depend on how much America has suffered under Obama. However, if America's economy is plodding along as it's currently doing, then I expect Hiliary to be elected. Why? Because America is so dumbed-down these days, that's why. Obama taught the Left how to win/steal elections. How to energise the youth vote in their favor. How to mobilise the black and hispanic voters. How to demonise the GOP inthe media.

Unless the GOP puts up a truly conservative nominee, it's tickets for the next generation. By the time the next election rolls in, most guns would be banned; gay marriage the new normal; any-time abortions coming free and fast; and amnesty granted for illegals.

What more can the Left destroy? Hiliary will be there to keep the agenda going while the GOP are still fighting about what they stand for, with the RINOs pushing the party further to the unnatural Left.

Lime, the GOP may rebound a lot faster than is imagined. Even the Dems in Congress are ignoring Obama these days while the GOP is finding its voice on issues like gun control (which the Dems do not want to vote on!) so I am a tad more optimistic than you. That said, I tend to believe the US is in decline morally, even if the economy were to recover.

I'm afraid, Alan, that the majority of Americans, who don't care about Obama's current failings, won't care about Hillary's "ancient" history either...