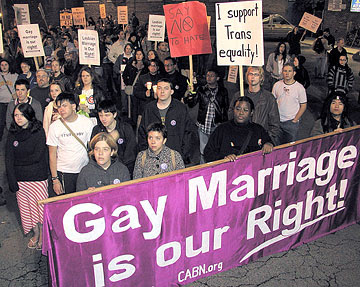 Is there is any doubt in anyone’s mind that President Obama and his administration is the most wicked group of people ever elected to govern the United States of America? Its announcement on Friday, February 22—Washington’s birthday—urged the Supreme Court to strike down the Defense of Marriage Act (DOMA), claiming that it “violates the fundamental constitutional guarantee of equal protection.”

“The law denies to tens of thousands of same-sex couples who are legally married under state law an array of important federal benefits that are available to legal married opposite-sex couples.”

They followed this by filing an amicus brief on February 28 urging the Supreme Court to rule that voters in California were not entitled to ban marriage for same-sex couples; which they had done by approving Proposition 8 in 2008.

Let us understand that “opposite-sex” couples are a law of Nature and that for the past five thousand years of human civilization, no nation or tribe has ever established same-sex marriage as a norm of society.

According to Wikipedia, 31 States have banned same-sex marriage while 9 have permitted it to occur.

It is insane that this issue continues to threaten the foundation of society in America As I noted in a July 2012 commentary, according to Wikipedia, “As of April 2011, approximately 3.5% of American adults self-identify as lesbian, gay or bisexual, while 0.3% are transgender—approximately 11.7 million Americans.”

The clamor for gay marriage is opposed by the vast majority of Americans as a threat to society. It undermines a fundamental condition of marriage, producing children, something gays and transgendered cannot do. In a nation where the fertility rate is so low that the population cannot replace itself, this poses a dangerous problem in itself.

The Defense of Marriage Act was enacted on September 21, 1996. It is a U.S. federal law that defines marriage as the legal union of one man and one woman for federal and inter-state recognition purposes. It passed with vast majorities and former President Bill Clinton signed it into law and, under DOMA, no U.S. state or political subdivision is required to recognize same-sex marriage from another state.

Simply stated, same-sex marriage laws and similar efforts to extend various “rights” to gays (a term used herein to describe all forms of homosexual behavior) pose harm to a nation that, from its founding, has recognized what all nations do, that gays are a sub-set of their population as the result of an aberration in their sexual orientation. Their same-gender selection does not conform to the normal conduct of life.

A Massachusetts-based organization, MassResistance, recently called attention to a directive issued by state education officials that would force transgenderism into all schools to ensure that transgender boys could play on girls’ sports teams, use girls’ locker and bathrooms. The opposite would apply to transgender girls regarding boy’s teams, et cetera. The directive accepts a child’s decision to “become” the opposite sex, even without parent’s knowledge or consent.

The directive stems from “queer theory” constructs that have become popular in the education field that blur the lines of gender. As MassResistance points out, “This entire concept—that children can change their sex—would in the past be considered something out of science fiction.”

The fact that the Obama administration is opposing DOMA and refusing to defend this law of the land tells you everything you need to know about those in power today. They have used that power to permit homosexuals to openly serve in the armed forces and have recently approved allowing women to serve in combat. A cowed, politically-correct leadership of the armed forces has yielded to this despite having argued against its impact on morale and combat effectiveness.

Those who worry about the moral health of our society have been concerned about the general failure of marriage as an institution. Other factors include the growth in the rate of illegitimacy which has gone from 26% in 1990 to 41% today. Among blacks it is an appalling 73%, Hispanics represents 53%, and among whites it has risen 29%.

The single parent “family” in America is regarded by concerned blacks as a form of genocide within their community, leaving many trapped in poverty and resulting in the failure, frustration, and anger that is reflected in the black-on-black murder rates in cities such as Chicago and a prison population in which blacks exceed 40%.

What, then, lies ahead for an America that cannot even establish and protect the institution of marriage? Why should the nation alter the ancient, fundamental concept of marriage to accommodate a minority whose sexual orientation runs counter to the heterosexual population, the basis of society?

And why is there so much silence from the nation’s religious leaders, Christian, Jewish, and other faiths? There should be outrage, not outreach.

This is wicked and evil. The Supreme Court has been wrong before, ruling that a black man was property—leading to the Civil War—and more recently that carbon dioxide is a “pollutant” and not a gas on which all life on Earth depends. If the Supreme Court sides with the Obama administration, everything on which our society is based would be imperiled.

Why would 97% of Americans allow a minority to dictate a threat to our society? This is not a fashion or fad. This is a deliberate effort to undermine the one institution on which a healthy society depends, marriage.
© Alan Caruba, 2013
Posted by Alan Caruba at 5:17 PM

Watch this John Birch Society video from 1958.This is the goal of the communist party to take over this country. Not from force but from with-in.I heard this from my Mother (age 93) more years ago than I can remember.By the way I asked her about this video and she remembered it from 1958.
https://www.youtube.com/watch?feature=player_embedded&v=kVOC11sSBoY

I think questions of this sort boil down to whether one believes in God. For if God exists, our job is to try and figure out how He intended things to work, and to encourage things to go that way; in fact, we can define "good" as that which the Creator intends, "evil" as everything else. If, on the other hand, God does not exist... well, then everything is simply a matter of taste and it becomes impossible to even define the terms "good" and "evil".

The picture above of the 2 women is obviously faked. Has anyone else noticed this? Why is this picture being used for a WARNING SIGNS post?

@Linda: I don't know how you know the photo was "obviously faked", but the photo was used to illustrate the theme of the commentary. There is no way I can determine its authenticity.

Alan, look at the hands on that photo, the bride on the right appears to have two left hands.
She has no sleeves on her dress and both hands are sleeveless and they both have left hands showing.
Not too mention one hand is seriously out of proportion.

To focus on the photo, and on the gay community, is a misdirection on our part IMHO. Most important is this: "...urged the Supreme Court to strike down the Defense of Marriage Act (DOMA), claiming that it “violates the fundamental constitutional guarantee of equal protection.” It's the Obama administration coercing things as usual.

Some gay people, including friends & family of mine, feel strongly about this whole marriage thing, & I think Obama is coercing them as well, taking advantage of their commendable desire to have committed relationships & have the state recognize those unions. He's dividing by stirring up envy as usual, people who have less envying people who have more, and people whose unions the state does not recognize of those whose unions it does.

It's all to distract us while he dismantles our military while encouraging our enemies.

I really hate it when anyone resorts to fake photos to prove a point, when it's discovered that it's a fake, they lose all credibility, much like the numerous birth certificates. lol

It's about time someone used the word wicked for these people. Evil would also work as a good description.

The transgender fad worries me even more than gay marriage. Thousands of confused vulnerable people are being encouraged to undergo permanent surgical mutilation. This is a worse crime than the “medical experiments” carried out by the Nazis in concentration camps. Evil is not a strong enough word for the people pushing this dangerous delusion.