The Dogs of War are Barking 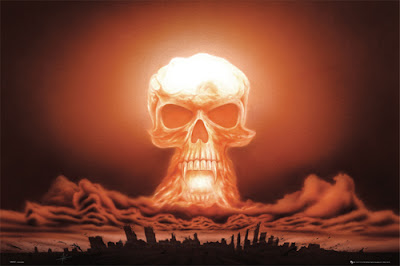 On March 5 the following were headlines and links on The Drudge Report and, when you put them together they add up to the greatest potential for World War III that the world has seen in a while.

# Obama 'not bluffing' over military threat...

Globally, there is always a lot of aggressive and defensive talk of war, but occasionally it boils up into action that everyone says was inevitable in retrospect because of the many signs leading up to it.

There are signs everywhere you look these days.  On March 6 an unnamed spokesman in North Korea’s foreign ministry said that it would launch “a preemptive nuclear attack” on the United States as the United Nations readied more sanctions. The young North Korean dictator is sending all manner of signals, including an announcement that he regards the long truce between the two Koreas as no longer in force.

It is unlikely North Korea would act on this without China’s permission and the last thing China wants is a million North Korean refugees flooding over the border. China has enough problems without that. They include a growing cohort of young men (18 to 25) without enough women to marry. Historically, that is always a recipe for trouble, either internally or externally, or both. China is also facing a housing bubble after building entire suburbs filled with buildings that are empty.

America, however, looks increasingly weak and President Obama has been doing his best to reduce the U.S. nuclear arsenal and reduce our troop strength. The U.S. has been steadily engaged in war in the Middle East since shortly after 9/11 in 2001 and much of our nation’s machinery of war is worn out and in need of repair or replacement.

Of greatest concern to the world is a nuclear-armed Iran and it is very much to their advantage to gain nuclear status with which to threaten the entire Middle Eastern. With its missiles, it can reach Europe as well. It has long been on record threatening to destroy Israel and Israel has a history of destroying nuclear facilities in Iraq and Syria in past years. The warnings about a nuclear Iran are increasing, but they are also largely being ignored, except for sanctions and rhetoric.

When the U.S. makes it known that it cannot or will not deploy a second carrier group to the Persian Gulf, it emboldens the Iranian ayatollahs. The inability or unwillingness to project power is always an invitation to aggression.

Nations in Europe, Greece, Italy, Spain, and others are on shaky ground financially. The U.S. mirrors their situation. That kind of vulnerability puts bad thoughts in the minds of men who would want to seize power as dictators or conquerors.

For those of us old enough to remember World War II, it puts us in mind of the way Europe had been at war for three years since 1939 until the attack on Pearl Harbor in 1941 brought the U.S. into the war. The warnings regarding Nazi Germany’s military buildup had been ignored. One wonders how America with a $16 trillion debt could mobilize to meet the challenge of a major war anywhere, especially when it is trying to withdraw from the Middle East as quickly as possible after squandering billions there.

The United Nations will prove, as usual, utterly useless in deterring either a big or small war should one break out. It is an utterly corrupt international institution, one that fosters the global warming hoax, has sided with the Palestinians for decades against Israel, and seeks to become a global government.

This is not to say that war will break out tomorrow, but it is to say that a variety of factors are combining to increase the potential of war at a time when the financial stability of the U.S., Europe, and by extension the entire world is very shaky.

When you add in a President who disdains both the Constitution and the normal relationship with Congress, and appoints men like John Kerry, Chuck Hagel, and John Brennan to positions of power, the situation grows increasingly dangerous.

I found this interesting if for no other reason than this; IF the Norks can actually HIT anything it's going to be the Left Coast and Hawaii... Libtard HEAVEN... Personally, I think they would be doing us a big favor, in an unintentional kind of way..

Haven't commented in a while but have been keeping up with your stuff. Just a quick comment as to NK and the nukes. I have said in the past it is impossible to negotiate with mad men and even more so if one considers his or her own leaders mad, which I certainly do on many levels including his Anti-American stance towards everything including the usual lip service towards china and their little offspring, NK.

My main concern is and has always been this. Rhetoric aside, NK does in fact have a nuke. NK does in fact have a delivery system which lob a nuke over the border into SK. And if memory serves, we have close to 35,000 troops stationed across that border. Doesn't really take a brain surgeon to realize a madman can cause serious problems and this scenerio is one that I has always worried me.

You make some good points, joseph. Negotiating with tyrants is a no-win situation. Everyone has given NK the opportunity to develop nukes, just as they have with Iran.

I love you Alan but wow are you a harbinger of bad news.But then we've always known all of this anyway. Let's hope and pray and don't take names.
"Semper Fi"

@Necromancer. The occasional reminder of the prospect of war is always a good thing.
Cheers, Alan C.

Even Sauron was defeated eventually by a Hobbit and before that Morgoth by a host of Elves and Dwarves and Men.And a few magicians and maybe a dragon or two.

Speaking truth and facts aren't being a harbinger of anything other than truth and facts.. It's called speaking of reality and probability, and Alan, you nailed it!

Ezekiel 38 and 39 Gog is Russia and Magog is Iran. prayers to you and all your readers.

Interesting parallel on your comment about not being able to negotiate with tyrants. It seems to me the man in the WH displays those attributes also.

Mr Caruba, you hit it spot on. It's really a bad scenario, but nevertheless the truth. These lowlife states will not hesitate to deliver a nuke. They also see the weakness of the worldleader, USA, and may consider it as it is, weakness. I cannot believe the once strong America is now kind of sidestepping this big problem. Every rightminded person in the West is worried.

I wonder if it will be the end of America due to:

It's kind of like a patient dying of AIDS thinking - "What will it be that finally kill me? A heart attack, cancer, or maybe just a common cold."