It's Not Just Winter, It's a New Ice Age 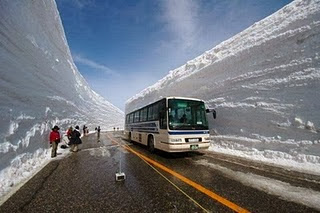 When you consider that a bunch of global warming propagandists, the 19th Conference of the UN Framework Convention on Climate Change, to reduce “greenhouse gas” emissions has been meeting in Warsaw this month are still claiming that we are in the midst of global warming, you have a demonstration of how great a hoax has been perpetrated on the peoples of the world. These people and the scientists who supplied the falsified and inaccurate climate models to support the global warming claims have committed a criminal fraud.

Bit by bit, the truth in the form of increasingly cold weather is causing people to wonder whether they are being duped. The media has either buried the stories of extraordinary cold events or continues to tip-toe around the truth.

An example is a recent Wall Street Journal article by Robert Lee Hotz, “Strange Doings on the Sun”, Hotz reported that “Researchers are puzzled. They can’t tell if the lull is temporary or the onset of a decades-long decline, which might ease global warming a bit by altering the sun’s brightness or the wavelengths of its light.”

After describing the fact that the Sun has entered a period of reduced sunspot activity, always a precursor to a cooling cycle and even an ice age, Dr. David Hathaway, head of the solar physics group at NASA’s Marshall Space Flight Center, is quoted as saying “It may give us a brief respite from global warming, but it is not going to stop it.”

Plainly said, you cannot trust what government scientists have to say about global warming. The government’s policy since the late 1980s has been that global warming is real and poses a great threat to the Earth. What Dr. Hathaway and other “warmists” are desperately trying to ignore is the fact that the Earth entered a natural and predictable cooling cycle around 1997 or 1998. It has been cooling ever since!

In 1997 Robert W. Felix authored the definitive book on the coming ice age in his book, “Not by Fire, but by Ice.” It is still widely available. His website, IceAgeNow.info provides updated information on the many weather events around the world that demonstrate an ice age—whether it is a mini-ice age or a full-scale one—is occurring. Felix says that a major Ice Age, when it begins, will come on very swiftly.

One post on Felix’s website is about Victor Emanuel Velasco Herrera, a geophysicist at the University of Mexico, who predicts that the “Earth will enter a ‘Little Ice Age’ which will last from 60 to 80 years and may be caused by the decrease in solar activity.”  You don’t have to be a geophysicist to figure out that less solar activity adds up to a colder Earth.

2014 is the year many scientists believe an ice age, “mini” or full-scale will begin. Herrera hedged his prediction saying that “with the mass production of current carbon dioxide (CO2) it is unlikely that we will see a major ice age like the one experienced 12,000 years ago.”  Carbon Dioxide plays no role in warming the Earth. It is a very minor element of the Earth’s atmosphere.

The implications of an ice age, no matter how long or short, is its impact on the growing of crops to feed everyone. Dr. Tim Patterson of Canada’s Carleton University’s Department of Earth Sciences, in a May 18, 2007 article in the Calgary Times, wrote that satellite data “shows that by the year 2020 the next solar cycle is going to be solar cycle 25—the weakest one since the Little Ice Age (that started in the 13th century and ended around 1860)…should be a great strategic concern in Canada because nobody is farming north of us. In other words, Canada—the great breadbasket of the world—might not be able to grow grains in much of the prairies.”  This prediction applies as well, of course, to the U.S. production of grains.

Other scientists have been sounding the alarm, predicting dramatic cooling to begin in the current decade. Dr. Oleg Sorokhtin, a Fellow of the Russian Academy of Natural Sciences, has noted that “Earth has passed the peak of its warmer period and a fairly cold spell will set in quite soon, by 2012, real cold will come when solar activity reaches its minimum, by 2041, and will last for 50-60 years or even longer.”  While the years cited by scientists may differ, they are in agreement that we are looking at decades of cold.

In the years since the late 1980s when “global warming” was unleashed on the world as the greatest hoax of the modern era, billions have come to believe the Earth was threatened by greater warming cause by man-made “greenhouse gases” resulting from industrial and all other uses of fuels such as coal, oil and natural gas. While carbon dioxide has, indeed, increased in the atmosphere, the truth is that the Earth has entered a cooling cycle and that it is on the cusp of very cold weather for decades. We could even cross over into a full-fledged Ice Age because one is overdue at this point in time.

You cannot depend on what the mass media tells you. They are hardwired to continue the global warming hoax. You can, however, educate yourself with books such as Robert Felix’s. You can use Google to find out more about ice ages. You can and should prepare yourself for changes in the Earth’s climate that will have vast impacts on the global economy and on the ability to grow enough crops to feed the world’s population.

The ignorance and arrogance of the self appointed "Masters Of Them That Know" never ceases to amaze me.

Average GLOBAL temperature anomalies are reported on the web by NOAA, GISS, Hadley, RSS, and UAH, all of which are government agencies. The first three all draw from the same data base of surface and near surface measurement data. The last two draw from the data base of satellite measurements. Each agency processes the data slightly differently from the others. Each believes that their way is most accurate. To avoid bias, I average all five. A graph of this (with different reference temperature) is Figure 1 in http://endofgw.blogspot.com/ . A straight line (trend line) fit to these data after 2001 has zero slope (actually slightly negative). That means that, for over a decade, average global temperature has not increased. Figure 2 in this paper shows the growing separation between the rising CO2 and not-rising temperature.

The bogus assertion that the earth is still warming happens by looking at the slope of a linear regression analysis which includes earlier lower temperatures. It fails to recognize the sudden change in the slope of the trend that took place in about 2001.

Measured temperatures since before 1900 are accurately (R^2 = 0.9) calculated by an equation at http://danpangburn.blogspot.com/

Thanks for your valuable input, Dan.

You can also read Cold Sun by John L. Casey.