Too Much Snow and Ice 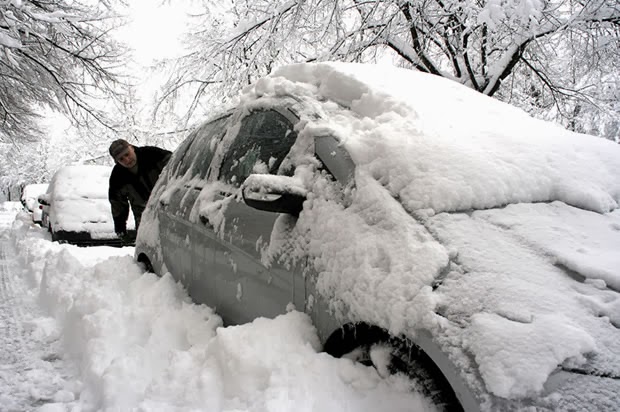 
From 1955 until I graduated in 1959, I was a student at the University of Miami. Those were halcyon years for me, enhanced by Florida’s famed bounty of sunshine and warmth. Born and raised in New Jersey, it was a respite from the Garden State’s winters, shoveling snow, and enduring the chill.


The last time I was in Florida was in 2004 to visit my older brother in Boynton Beach and when the wall of heat hit me as I exited the West Palm Beach airport, I knew I would remain in Jersey.


I am no fan of winter. I don’t ski or ice skate. When it’s cold I stay inside where it’s warm. I venture outside once a day to turn over the car engine while picking up a lottery ticket in hopes of winning enough money to live somewhere warm during the winters here.


I don’t know how many blizzards or just big snowstorms I have lived through at this point in my life. In my experience, most people tend to forget them when springtime arrives. Winter, which often seems to have no end, is still only four months.


After decades of “global warming” lies from Al Gore, environmental organizations, and government agencies, I knew well that, while the northern hemisphere had begun to warm around 1850 after a long cold cycle and the amount of warmth was sufficient to provide comfort, it was too small for anyone to effectively measure.


One of my favorite quotes is from Dr. Richard Lindzen, a professor of atmospheric science at MIT: "Future generations will wonder in bemused amazement that the early 21st century's developed world went into hysterical panic over a globally averaged temperature increase of a few tenths of a degree, and, on the basis of gross exaggerations of highly uncertain computer projections combined into implausible chains of inference, proceeded to contemplate a roll-back of the industrial age."


I am pretty sure that those who lived through earlier blizzards and snowstorms did not consider them as anything other than normal. Some, though, made history. History.com even has a list of major U.S. blizzards. Perhaps the most famed was the Great Blizzard of 1888. It dumped 40 to 50 inches of snow in Massachusetts, Connecticut, New York and New Jersey. More than 400 people died; the worst toll of a winter storm. A year later in 1889, a blizzard started in Florida and then moved up the coast dumping 20 inches of snow on Washington, D.C. and 34 inches on New Jersey.


The Great Blizzard of 1888 led legislatures in Boston and New York to break ground on the country’s first underground subway systems.


Those of us on the East Coast would wait a century until 1993 for a combination blizzard and cyclone “wreaked havoc from Cuba to Canada” killing 310 people in its wake. In February 2010, snowstorms were raging from northern California to North Carolina, but typically it was the Mid-Atlantic and New England States that were hardest hit.


In January, record freezing temperatures gripped the entire nation. Energy consumption set some new records as well. Icy conditions in storms since then have left some areas without any energy and yet the environmental organizations keep fighting the development of any new sources of coal, oil and natural gas to provide needed energy. The White House has done everything in its power to accommodate this idiocy.


On February 7, The New York Times published an article by Porter Fox, the features editor at Powder Magazine—as in snow powder—and author of “Deep: The Story of Skiing and the Future of Snow.” Fox may know about skiing, but his knowledge of snow consists of his belief that, all over the world, “snow is melting.” This is straight out of the global warming belief that the small amount of warming since the mid-1880s was a threat to the planet. “The planet is getting hotter.” As Dr. Lindzen points out, a few tenths of a degree is meaningless.


A few years ago, The New York Times shut down its environmental reporting unit, laying off some and reassigning others. Now, apparently, it is content to publish utter nonsense about how all the snow is melting everywhere.


In recent weeks and days there has been heavy snow in Tokyo, Japan, that took some lives. Heavy snow has fallen in Austria and Italy, as well as northern Iran. People around the world are looking out their window and seeing snow.


Blizzards are a seasonal reminder that humans do not control the Earth’s climate. The Sun does that along with the oceans, volcanic activity and other natural factors. They only thing humans can and must do is endure them.

I grew up in Jersey City in the 1950s and 1960s and now live in Old Bridge. There were some memorable snowstorms back then, but less precipitation and more sun on the whole. I hope we swing back that way for a while.

I just talked to my Son, he's in Duluth/Johns Creek area and they shut down the State Farm call center yesterday and today, he's working from home, they have electricity and heat, plenty of food and State Farm is hoping to open the center at noon tomorrow.. He is a Southern kid, raised in Texas and Louisiana and I'm pretty sure that right about now he's thinking like most *sane* people, this GloBull Warming is a crock of BS..

Stay safe out there Alan, it's almost 50° here in Rowlett today!

Let's face it - AGW is part of the religion of the Left, along with abortion and the dictatorship of Obama.

Therefore, it's pointless to use logic, facts and reason to win over hardcore Leftists.

The best we can do is win over the undecided, which thanks to the efforts of writers like Alan, we are doing.

The polls prove it.

Alan! Quick! Grab your camera and your kids!! We have it here on good authority that you may be missing your last chance!!!

From the UK Independent, 14 years ago: http://www.independent.co.uk/environment/snowfalls-are-now-just-a-thing-of-the-past-724017.html

==
Sledges, snowmen, snowballs and the excitement of waking to find that the stuff has settled outside are all a rapidly diminishing part of Britain’s culture, as warmer winters – which scientists are attributing to global climate change – produce not only fewer white Christmases, but fewer white Januaries and Februaries. … According to Dr David Viner, a senior research scientist at the climatic research unit (CRU) of the University of East Anglia,within a few years winter snowfall will become “a very rare and exciting event. Children just aren’t going to know what snow is.”

Now THAT was published back in the year 2000. We may be among the last human beings to see this “snow” stuff! If any of you have enough of it, try to collect it into a little glass phial or something so you can store it in your freezer and show your kids what it looked like someday! Heck, it might be worth a FORTUNE when we’re scraping by on Social Security and Obamacare!

Excerpt: “Is the North Pole going to melt entirely? … Reports … all point to a radical change in climatic conditions, with hitherto un-heard-of high temperatures on that part of the earth’s surface.”

@Michael. That would be funny if it also wasn't delusional. The Greens might as well be worshipping rocks because none of their "science" has proved correct.

To all of my friends and family enjoying the lovely weather on the East Coast today:

I am loving me some Texas weather now...