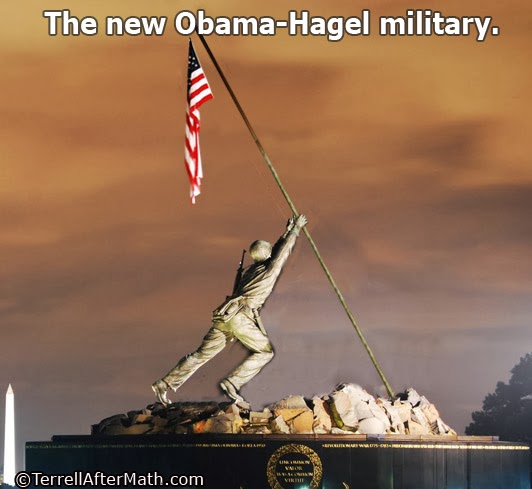 By Alan Caruba
It tells you everything you need to know about the idiots running this country. As the Russians were invading Ukraine, our Secretary of Defense was discussing major cuts to our military budget.
“Si vis pacem, para bellum” is wisdom passed down to us over the centuries from ancient Rome It translates “If you want peace, plan for war.”
One of the requirements the early presidents of the nation faced was the creation of an army and navy to protect it from the imperialist powers of Britain, France and Spain, all of whom had their eyes on parts of the continent they wanted to claim. After the Revolution, the nation fought a succession of wars to protect and expand the map we now have.
The world to the Founding Fathers and all presidents since was seen as a dangerous place because it is.
The only “success” of President Barack Obama has had to date has been to impose six trillion more in debt than when he arrived. A variety of programs such as the failed “stimulus” added to the debt and the deficit.
He has been consistent in seeking cuts to our military budget. From his first year in office Obama has sought to reduce the military in every way possible, though part of the reductions are attributed to the sequestration limits to reduce government spending. There are areas that most surely require reductions, but the security of the nation to protect itself and maintain and project its influence is critical.
Since the end of World War II, the U.S. has exerted this power. In the 1950s President Truman extended protection to South Korea after it was invaded by the Soviet-backed North Korea. The war ended in a stalemate that exists to this day. There have been other conflicts with less successful outcomes and they include Vietnam, Iraq and Afghanistan.
In each case, we stayed too long. After the 9/11 attack the Afghanistan conflict was essentially won by 2002, but we stayed on. The Iraq War outcome has been a spectacular failure because the Obama administration was unable or unwilling to retain a military presence there. The Syrian civil war has cost over a 130,000 lives after Obama failed to respond to the red line he drew and turned Syria over to the Russian Federation. Iran is also an ally of the Assad regime there.
In an act of incredible naiveté or stupid or both, the U.S. is negotiating with Iran in the belief that diplomacy will have any effect on an Islamic republic that has regarded itself at war with the U.S. and Israel since it came into being in 1979.

No matter the outcome of the current budget cut proposals, Americans know they owe a debt of gratitude to those who put their lives on the line to fulfill the outcomes they were called upon to fight for. We won World War II because we destroyed the capacity of Germany and Japan to wage war. That is the only way to win a war.
Earlier, after our entry into World War I resulted in bringing that first modern conflict to an end, its veterans returned home to discover that benefits they had been promised were not fulfilled. The Bonus Army was the popular name given to an assemblage of an estimated 43,000 marchers, some 17,000 veterans and their supporters, who in 1932 wanted the cash payment redemption of their service that had been promised. The nation was in the midst of the Great Depression, not unlike our present economic decline. In July, after being ordered off of all government property, the marchers along with their wives and children were assaulted by U.S. infantry and cavalry, support by six tanks. Some deaths ensured. A second, smaller Bonus March in 1933 was defused by the Roosevelt administration. In 1936 Congress voted to pay the veterans.
America has enacted veteran appropriation bills on time only three times of the past 25 years. There is a huge backlog in the disability benefits claims. Four years ago, recognizing the harm to the Veterans Administration healthcare system, Congress passed and the President signed legislation to fund it a year in advance, removing it from the gridlock affecting so much of the nation’s programs. The problem, however, continues.
Any nation seen to be weak will have to deal with its enemies in some fashion.
The ancient Romans knew that and it is no less true today. A recent poll indicated that Americans believe that the U.S. is no longer respected by other nations. They are right and the source is Barack Obama who was in part elected by his promise to withdraw troops from Iraq and Afghanistan. The U.S. will be out of the latter by the end of this year.
The announcement by Defense Secretary Chuck Hagel regarding major military funding reductions reflects the President’s efforts to destroy its ability to respond to a future conflict.  The likelihood that we might have to fight global wars such as WWII is offered as the reason for the cuts. That has not precluded lesser conflicts. All wars, however, are very expensive. Not having to fight them is a very good investment. It is an essential reason for maintaining a powerful military capability.
The budget put forth by the Obama administration would shrink the Army to pre-World War II levels. The current 520,000 active-duty soldiers would shrink to 440,000-450,000. The U.S. Marines, now numbering around 190,000 would be drawn down to 182,000 or to 175,000 if sequestration –level cuts were continued in 2016 and beyond. The Air Force will reduce the number of tactical air squadrons and retire the entire A-10 fleet; a Pentagon recommendation that reflects their primary anti-tank mission which they deem to be no longer needed.
The Army National Guard and Reserves would also be drawn down—from the current 355,000 to 335,000 for the Army and the Reserves from 205,000 soldiers to 195,000. If sequestration returns, the former would be reduced to 315,000 and the latter to 185,000.
Former Vice President Dick Cheney says that Obama would “rather spend the money on food stamps than he would on a strong military and support for our troops”, believing that “somehow, a strong America, well equipped, with a strong military, is a danger to international peace and stability.”
“And just exactly the opposite’s true,” said Cheney, “I think if history teaches any lesson, it’s that the world’s a safer, more stable place when the United States is strong and is prepared to use that strength when necessary.”
If one does not learn from history, as a sage once noted, you are likely to have to repeat it.
Having weakened the nation’s economy, causing millions to be unemployed, and having attacked its healthcare system, the nation’s military strength is now openly being attacked by the proposed reductions.
Nothing good can come of this.
© Alan Caruba, 2014

Alan, I think this weakening of our military and our country's safety is a calculated act. This administration is led by people who hate America and all it stands for. There are muslims in high offices who if true to their faith see it as their duty to weaken us so they can attack us.

Obama is simply a figurehead who is only interested in being feted and adored. He could care less what happens as long as he remains popular.

Thanks Alan. None of this is funny and everyone here knows what is happening. Trouble is no one knows how to fix it or much of anything else.But it's not our fault but rather the officials elected to represent us the people.

Yet at the same time the U.S. military is being gutted by the Obama Regime their weapons are being given to Homeland Security.

Obama may be cutting back on the ability to respond overseas, but at home apparently every federal worker from the Mr. Postman on down is being turned into a potential combat soldier.

As Obama is well aware his enemy is the 100 million plus well armed American Patriots, who would have the largest standing army in the world if they decided to call "action stations" and overthrow the Federal Government.

Meanwhile the arms race between the Feds and Patriots continue with gun and ammunition makers working overtime to fill the orders.

On the other hand, if the regime in Washington is the principal enemy of the American people (or at least its White majority), then weakening the military is a good thing.