A President, Not a Potentate 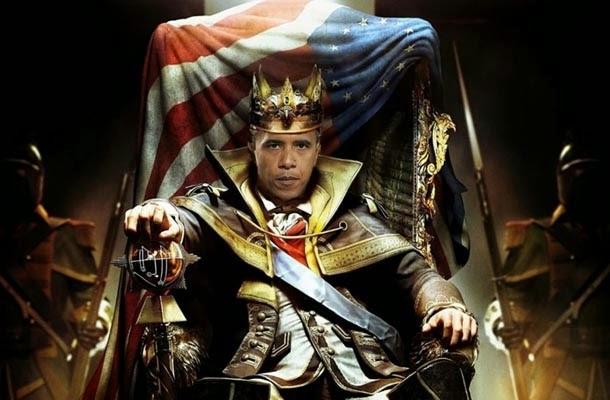 
In 2010, before the midterm elections, President Obama said, “We’re gonna punish our enemies and we’re gonna reward our friends.”


Instead, it was the Democratic Party that got punished as voters rejected its candidates, rendering it some of its biggest losses since the Great Depression. The Republican Party gained 63 seats in the House of Representatives, recapturing the majority, the largest seat change since 1948.


In November 2014, the voters gave complete control of Congress to Republicans for the first time in eight years as they retained every one of the GOP Senate seats up for reelection and added six more to ensure a Republican majority.


What was apparent before the 2010 election and since has been a President who regards himself and his powers as that of a potentate, a monarch scornful of the Congress in the same way English kings scorned their parliament until forced to relinquish total power and grant individual freedom to their subjects.


In the twenty-two months before Obama’s second and final term ends, I am, I confess, increasingly fearful of what he has in mind for America. The voters have already made it clear they oppose his gun control efforts, his views on illegal immigration and they want ObamaCare repealed.


As this is written, Americans are growing increasingly concerned over the outcome of the negotiations with Iran. Obama’s chief of staff, Denis McDonough, has written to Bob Corker (R-TN), the chairman of the Senate Foreign Relations Committee, harshly criticizing the notion that the Senate should have anything to say regarding the negotiations and suggesting that Obama has the authority to lift the sanctions imposed by Congress on Iran. He doesn’t.


A White House that believes it has powers that a simple reading of the Constitution tells them are limited is dangerous place. Obama’s White House has been gaining a reputation for lawlessness and we have seen this in the way the IRS denied conservative groups the right to tax-exempt status to which they were entitled. Then, not so mysteriously, the emails that would reveal this were “lost.”


In the wake of the Benghazi tragedy in which our ambassador and three other staff were killed on September 12, 2012—the anniversary of the attack on the World Trade Center and the Pentagon—the emails of the then-Secretary of State Hillary Clinton have gone missing along with all the rest of those wiped clean from her personal server. I still recall seeing her stand beside the President when he blatantly lied to Americans and the world that the attack was the result of a video no one had ever seen.

In his book, “Our Lost Constitution: The Willful Subversion of America’s Founding Document”, by Sen. Mike Lee (R-Utah) he devotes a chapter to the Fourth Amendment:


“The right of the people to be secure in their persons, houses, papers, and effects, against unreasonable searches and seizures, shall not be violated, and no Warrants shall issue, but upon probably cause, supported by Oath or affirmation, and particularly describing the place to be searched, and the persons or things to be seized.”


Colonial Americans had watched a famous case in England in which John Wilkes had led the fight to ensure that the King could no longer arbitrarily search and seize the property of anyone. They had fought a Revolution to be free of such tyranny. In the effort to secure the ratification of the Constitution, in 1789 James Madison began drafting the Bill of Rights that several of the states said had to be part of the Constitution if they were to ratify it. It was introduced to the First Congress that same year.


Sen. Lee expresses concern that “for the past eight years, the federal government has relied on an excessively broad interpretation of an excessively broad provision of the USA Patriot Act to collect and, in some circumstances, search through vast amounts of information that most Americans would consider both private and entirely unrelated to national security.”


Noting the intelligence agencies such as the National Security Agency that routinely gather enormous information about all our electronic communications, telephone calls and email, Sen. Lee says that “One could argue, however, that that far greater threat to government of the people, by the people, and for the people is the near certainty that those who wield this power will eventually use it to identify and punish anyone whom may disagree with them. This type of abuse could weaken or even destroy constitutionally limited government as we know it.”


That’s what has me worried specifically about Barack Obama. I have no doubt at all that he would and probably has used the vast information gathering capacity at his disposal to “punish” those he regards his enemies.


Consider what he did to Iraq War hero Gen. David Petraeus who he had appointed as Director of the CIA. He drove him from that post and threatened him with jail for an infraction that likely was discovered by monitoring his private communications. By contrast, Hillary Clinton’s email server was, according to intelligence experts, likely hacked to the point where our enemies knew exactly what she and the State Department was doing. And she wants to be your next President.


My ultimate concern is that Obama might declare martial law for whatever spurious reason he would give. It would suspend the Constitution and leave us with no rights at all, subject to arrest for resisting his takeover of the nation. It would also mobilize the largest army in the world…America’s hunters and gun owners!


Obama has been working to federalize police authorities around the nation. He has purged the military of any officer that was deemed to disagree with his policies. All that stands between us and him is the Constitution and Congress. And the fact that millions of Americans, thanks to the Second Amendment, are armed in the event he tries to assert dictatorial powers.

Anyone familiar with me, knows I have been saying the same thing for over two years now. That I too fear obama will declare martial law in order to suspend elections and declare himself chancellor for life, or dictator, or king, or whatever name he wants to give himself as supreme ruler.

I have posited that he will use "brown" skins similar to how hitler used brown shirts to spread violence and chaos. obama NEEDS a war, or an uprising, or a national tradgedy of some sorts in order to to this. Will it be an iranian nuke? Racial riots throughout? Or some other national chaos? Or will he simply declare it. The last may work as he has grown quite bold and no longer hides his past like he once did.

Sadly, there are those, that unlike obama, did not grow up muslim, or a communist, or a racist, but still want to see America fall for one reason or another. They will gladly ignore obama's reason for taking over, and will gladly help him, just for the sake of our own destruction.

I often wondered how hitler rose to power, and how a good people like the Germans, living in a once great nation, could allow such horror to occur. I now know how they felt, as I can very easily see that we are only a few steps away from obama doing the same thing. No one has stopped him, despite so much recognition that obama plans for the destruction and "change" of our great country.

Maybe I am simply paranoid, and boy do I hope that that is all it is...paranoia. But until obama is out of office, and a rational conservative is once again in power, with a new course set for our country...I will not rest easy. I have heard that it is a curse when someone say to you "May you live in interesting times". Well, one thing is for sure...times are interesting.

Sdkar alan Sadly the obama administration will continue under hillary, unless the GOP can get their act together. I fear that the repubs will spent all their energy and money fighting for the nomination While Hillary gets crowned and walks to another 4 or 8 years of destruction. I sure hope not but that's a real possibility.