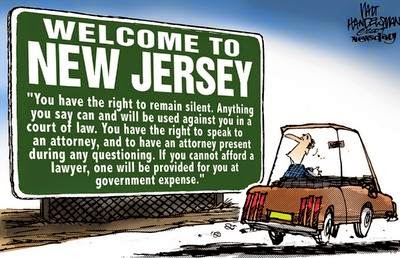 
I’d be surprised to learn that anyone in the Obama and Holder Department of Justice even knows how to spell “justice.”


On the same day it announced an indictment of New Jersey Senator Robert Menendez (D) for allegedly taking bribes and engaging in various forms of corruption, it also announced that it would not pursue a criminal contempt of Congress resolution against Lois Lerner, the member of the Internal Revenue Service at the center of the effort to deny conservative groups the right to be certified for non-profit tax status.


Without such status, the group’s ability to raise funds and pursue their issues and agenda was significantly impacted. If you were a liberal group, however, you sailed right through. That’s that way the Obama administration has functioned in all aspects of governance since it began in 2009.


In what is now becoming a standard way of avoiding an investigation, last June the IRS announced that it had “lost” two years’ worth of Lerner’s emails in a 2011 computer crash. An IRS inspector general, however, unearthed the backup tapes believed to contain them. Lerner would not speak to lawmakers, but she has reportedly cooperated with the FBI.


In an April 1 Politico.com article, “Don’t Blame Menendez, Blame New Jersey” Jeff Smith and Brian Murphy would have you believe that New Jersey is a steaming heap of political corruption that has no equal. When was the last time a New Jersey senator was found guilty of bribery? 1981. Thirty-four years ago. An entire generation has been born and grown up in the Garden State since then.


I am born, bred, and live in New Jersey. Illinois has ex-Governors in jail and no New Jersey Governor ever shared that distinction.


Our current one, Chris Christie, came to statewide attention when, as the U.S. Attorney for New Jersey, he put a number of our politicians in jail for corruption in addition to a slew of convictions for sexual slavery, arms trafficking, and racketeering by gangs, along with other federal crimes.


He was a very good lawyer and had also been politically ambitious, rising through the ranks, campaigning for Bush 41 and 43, the latter who appointed him to the State Attorney post. In a very Democratic state, he would handily defeat Joe Corzine in 2009 to become Governor because Corzine was as incompetent then as Obama is today.


The rap on New Jersey is that politicians and those who donate a chunk of money to support their election are somehow different or special in some way. I doubt there is a political reporter or blogger in any other state that could not regale you with a history of their crooked politicians and appointees that would not equal or exceed ours. 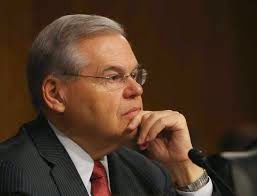 Now, let’s get to the heart of the charges against Sen. Menendez. More to the point, when the charges were announced. In early March he gave a speech to the American Israel Public Affairs Committee, Menendez made no secret of his displeasure that the Obama administration was negotiating with Iran. “When it comes to defending the U.S.-Israel relationship,” he told the group, “I am not intimidated by anyone—not Israel’s political enemies and not by my political friends when I feel they’re wrong.” He said that as long has he had an ounce of fight in him, “Iran will never have a pathway to a (nuclear) weapon.”


And Menendez had also made it clear that he opposed the normalizing of a diplomatic relationship with Cuba. “The deal achieved nothing for Americans.”


When the DOJ indictment was announced, the state’s largest daily newspaper virtually pronounced him guilty. “The litany of travel arranged by U.S. Sen. Robert Menendez’s good friend, Salomon Melgen, reads like the operation of a small airline.” It salivated over the 68-page indictment and the favors alleged between him and “his wealthy benefactor” that included “more than $1 million to various political campaigns connected to the senator.” No question about it, Melgen was Menendez’s friend and supporter. That is, however, not against the law.


I doubt there is a member of the U.S. Senate that does not have such wealthy supporters, nor any that have not accepted an invitation to vacation as their guest.  Did Menendez reply by using the influence of his office to facilitate visas or the approval of deals by which Melgen would benefit? In one cited case that influence did not have any effect on the outcome, but simply stated this is part of the job. It is the quid pro quo of politics and always has been.


The Department of Justice indictment came at the same time the Obama administration had squandered 18 months in useless, senseless negotiations with Iran to arrive at an agreement that would ultimately permit Iran to produce nuclear bombs. No other nation wants that. Iran had never ceased to tell the world it intended to “wipe Israel off the map”, nor cease to call America the “Great Satan.”


The level of hubris from the President to the Secretary of State to those engaged in the negotiations is beyond measurement. It blinds them to the obvious.


The White House clearly could not permit a prominent Democratic senator to tell the Israelis and the world what a bunch of jackasses they were. They feared losing control of the rest of the Democratic senators and thus Menendez is being subjected to a long, costly indictment as a lesson to the others.


The indictment suggests a pattern of corruption based solely on the relationship between Menendez and Melgem, both longtime friends. If Menendez broke the law the DOJ should have been able to come up with comparable charges involving others for whom he intervened. If I was a gambling man, I would bet that Sen. Menendez beats the charges.

I believe it to be one of the most heinous acts of injustice that Corzine is allowed to walk as a free man... He was possibly the most corrupt man to ever hold the office of Governor of New Jersey...