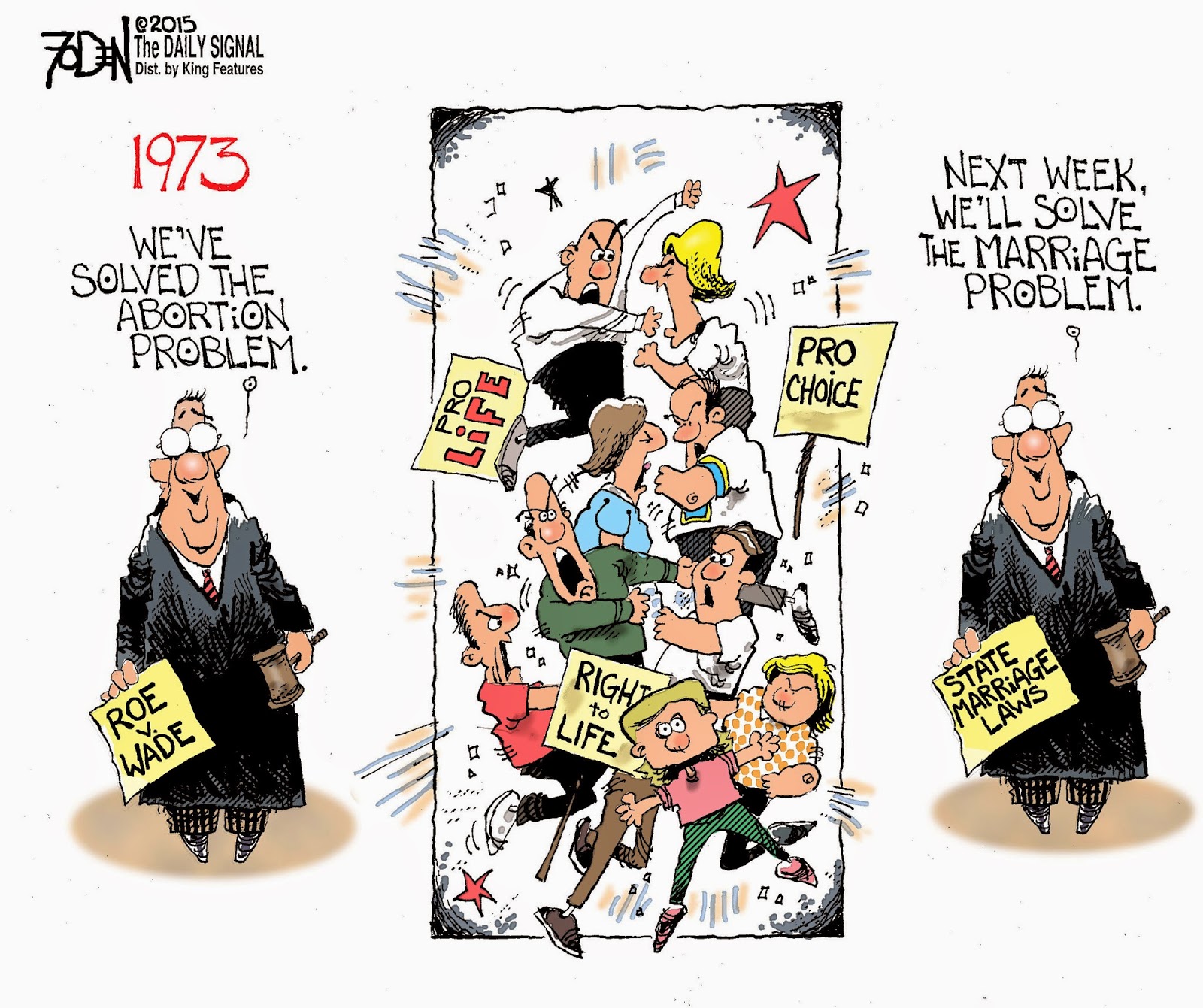 
In 1973, the Supreme Court looked into the Constitution, found that it approved of abortion and overruled laws banning it. Other laws have since addressed late term abortions and those resulting from rape or incest, but killing human life in the womb has been lawful since then. . According to the Guttmacher Institute from 1973 through 2011, nearly 53 million legal abortions occurred in the U.S.


By dismantling the fundamental traditions and beliefs of a nation piece by piece, you ultimate will destroy it. Claiming this is done in the name of “love” or “equality” ignores the greater societal issues involved in marriage; the creation of families with mothers and fathers, and, indeed, the welfare of children raised in same-sex marriages.


Abortion remains a moral issue in the minds and hearts of many Americans and now they are waiting to see how the Supreme Court will rule on same-sex marriage. As Ryan T. Anderson wrote in The Heritage Foundation’s publication, The Daily Signal, “There simply is nothing in the U.S. Constitution that requires all 50 states to redefine marriage.”


Anderson points out that “The only way the Court could strike down laws that define marriage as the union of husband and wife is to adopt a view of marriage that sees it an essentially genderless institution…” Marriage is all about gender and the union of opposites that is blessed by the community when a man and woman enter into it. To legalize same-sex marriage is to degrade the essential element of society, the keystone of family.


What we are witnessing is the current high point in a long campaign to remove any obstacle to being homosexual and the right to marry another homosexual represents an important political goal for GLBT community. For them it’s not about the thousands of years in which all societies forbid the marriage between those of the same gender or the 227 years since the Constitution was ratified.


Clearly the Constitution neither requires nor bans same-sex marriage. The thought of such a marriage would never have occurred to the Founding Fathers and the creation of a new nation had far greater priorities and responsibilities than same-sex marriage. Most such issues such as abortion were left to the states to determine. Even so, when the voters of California voted in 2008 to ban same-sex marriage, the courts there overturned it.


We are witnessing a homosexual juggernaut that will settle for nothing less than their own interpretation of the relations between the sexes.


When the Supreme Court hears the same-sex marriage case on Tuesday, April 28, it will be decided by a Court that is sharply divided between liberal and conservative points of view, but in the legal community, there is no argument that, as federal law states, “Any justice, judge, or magistrate judge of the United States shall disqualify himself in any proceeding which his impartiality might reasonably be questioned.”


That’s why the fact that in late September Justice Elena Kagan performed a same-sex “wedding” takes on tremendous importance. As documented by MassResistance.org, Justice Kagan has a long history of advancing homosexual issues and policies. A 16-page report leaves little doubt that she favors acceptance of homosexuality and transgenderism as “civil rights.”


There is no way that Justice Kagan should join other Supreme Court judges to rule on this case. That would run counter to federal law and would be an arrogant dismissal of the most fundamental concept of justice before the bench.


What we have learned thus far is that the practice of same-sex marriage has proven more a threat to the rights of those who are opposed to it for sincere religious reasons than for those demanding their services.  If there is any justice left in America, a bakery or florist should be able to say no. Demanding that they act against their faith tells you a great deal of the homosexual mindset when it comes to their “rights.”


I am utterly opposed to same-sex “marriage” for all the reasons the Bible and history provide.


If Justice Kagan does not recuse herself from Tuesday’s case and her fellow justices do not demand that she does, the rule of law and justice in America will have suffered another serious blow.

"the rule of law and justice in America will have suffered another serious blow."

The rule of law and justice has not existed in this country for some time now. When equal protection under the law ended here, so did the rule of law. As our current politician and his attorney general have repeatedly flouted the law and refused demands from CONgress to hand over documents related to Benghazi and fast and furious, it is without a doubt that the rule of law is nonexistent here.

Elena Kagan has had a long history of disregarding the ethical requirement of recusation when there is a clear case of conflict of interest or bias. Recall that she was involved in the creation of the Affordable Care Act, and then had absolutely no issue in participating in the Supreme Court cases intended to kill it. She is, without a doubt, the textbook case of an inside saboteur.