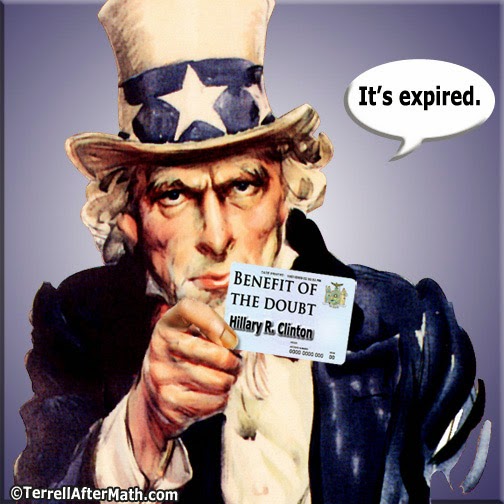 
Imagine that you are the former Governor of Virginia, Robert F. McDonnell and his wife, Maureen, both sitting in jail after having been found guilty last year of public corruption for accepting golf outings, lavish vacations and $120,000 in “sweetheart” loans. Compared to the Clintons they are just two failed bit players.


Writing in the May issue of Commentary, Jonathan S. Tobin, a senior editor, noted the lack of a “smoking gun” in the case of just the latest Clinton scandals. “But what Democrats and all Americans should be asking about this argument is why some people get prosecuted for corruption on such circumstantial evidence while others are considered likely to be elected president.”


“Just because a prosecutor isn’t likely to haul the Clintons into court over all these astonishing coincidences (or at least not so long as the Democrats control the Department of Justice), that doesn’t mean their behavior doesn’t smell to high heaven,” said Tobin. “The court in which the Clintons deserve to be condemned is that of public opinion.”


The Clintons have conspired and sometimes acted in direct contradiction of the law to rely on the concept of circumstantial evidence. Hillary’s use of her own private email server and her later destruction of that server is a classic example of this behavior. The high-paid speeches which Bill gave put him into a gray area of collusion, benefitting from the influence Hillary had as Secretary of State. Ultimately, the donations to their foundation by foreign governments rank far above a mere misdemeanor. It was too often just blatant bribery.


I fear that far too many Americans do not realize that our nation and its system of justice are on the cusp of encountering serious damage. Merely condemning the Clintons for what we know at this point is simply not enough.


What is needed is a widespread denunciation of their actions over recent years.


What is really needed is a decision by the Democratic Party to withhold the right to run in its primaries for the office of president, based on her actions deleting emails and accepting donation to the foundation.


The U.S. media needs to be more vocal that Hillary withdraw her candidacy.


Why would a media mute its criticism and a political party ignore the obvious revelations, even if deemed circumstantial evidence, of the corruption demonstrated by the Clintons?  The Clintons have been given a free pass from the day they entered politics.


As Peggy Noonan, a Wall Street Journal columnist, has said, “We are defining political deviancy down.” That degrades the process by which we select and elect the men and women who are given the role and responsibility of lawmakers.


As Noonan notes of Hillary, “The story is that this is what she does, and always has. The rules apply to others, not her.” As recently as 2012, the State Department forced the resignation of a U.S. ambassador for “in part setting up an unsanctioned private email system.”


“In 1992 the Clintons were new and golden. Now, so many years later, their reputation for rule breaking and corruption is so deep, so assumed that it really has become old news. And old news isn’t news.”


Except when it is. When old news is an unbroken succession of wrong-doing it is incumbent on everyone involved with the present “campaign” by Hillary Clinton to be the next President to not avoid the stink that arises from both the earlier and most recent revelations.


“A generation or two ago,” said Noonan, “a person so encrusted in a reputation for scandal would not be considered a possible presidential contender. She would be ineligible. Now she is inevitable.”


Those earlier generations have been replaced by those more intent on celebrity than substance. They have the attention span of fungus. They lack any vision for America, having never really learned about or absorbed the lessons that the Greatest Generation and others passed onto us.


Are there enough of them to plunge America into the Clinton cesspool by electing her President? One can only pray that the answer is no.

“But what Democrats and all Americans should be asking about this argument is why some people get prosecuted for corruption on such circumstantial evidence while others are considered likely to be elected president.”

I don't understand the fascination with people like the Clintons or Obama... They are merely CROOKS that haven't been prosecuted, uh, wait, Bill was impeached but the evidence didn't get a conviction... OK, back on track now; Hillary brings more baggage than an ocean liner and more suspicion than a movie thriller, but people look the other way...