Holding the Voters in Contempt 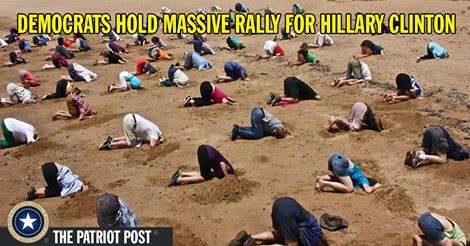 
Today’s lead story in The Wall Street Journal is about the result of its latest poll regarding Hillary Clinton. It says a lot about why she and the leaders of the Democratic Party must surely hold its core members in contempt. “Support for her among Democrats remains strong and unshaken.”


In the seven weeks since she announced her candidacy to be the next President of the United States and then virtually vanished from view, the news about her destroying private emails that should have been public records and the shenanigans of hers and Bill’s foundation have taken their toll.


The share of people with a negative view of Hillary says the Journal “jumped to 42% from 36%” and “only a quarter of registered voters said they view her as honest and straightforward, down from 38% last summer.”  Only a quarter? You mean that many people still think she’s honest?


As Peter Wehner opined in Commentary “the depths of the Clinton’s corruption and avarice is stunning” noting that “The Clintons have known for years that Hillary would run for president—and yet they still undertook this transparently unethical and potentially politically catastrophic action” referring to their foundation’s actions and the “deletion of 30,000 emails, another breathtaking inappropriate, and possibly illegal act.”


The track record of the Democratic Party at this early point in the 2016 campaigns makes one ask why anyone would still support it, its lone candidate, and its representatives. The economy has been in the tank for the whole of the Obama administration, the same one that a Democrat-controlled Congress foisted ObamaCare on the nation without ever having read the bill.


The President’s primary obsessions these days are making sure Iran gets to have a nuclear arsenal, extending diplomatic recognition to Cuba, the leading Communist nation in our hemisphere, and making sure that our southern border remains so porous that thousands of illegal aliens can gain access.


I would be happy to tell you what Hillary’s objectives and policies are, but other than repeating the same old, failed liberal crap of the past, there’s nothing specific to identify. Does she want to “help the poor”, “protect the middle class”, et cetera? Well, sure she does. As to anything else, her opinion today is often in direct opposition to her opinion of yesterday. She’s not saying much and with reason; as often as not she makes a fool of herself in the process.


If you were a leader in the Democratic Party would you take a dim view of those who vote to keep your candidates in office? Would you, however, even once ask why the Party is unable to produce more than one candidate for President (forget Bernie Sanders—he’s a Socialist who votes with the Democratic caucus) at this point?


And who is that candidate? It is a former First Lady who has spent her entire life in politics riding the coattails of her husband, a charming rascal who has cheated on her for decades. Together they have been in more scandals than can be listed here.


They may have been “dead broke” when they left the White House, but they now own two houses and are worth millions, not the least because as Obama’s Secretary of State the foundation took in millions in donations and Bill took in millions to give speeches, often from the same donors. Was the U.S. foreign policy purchased over her four years? Was the security of the emails she was sending breached? Definitely. Can you name a single treaty or major foreign policy achievement of Hillary Clinton’s service as Secretary of State? Neither can she.


Pause now and compare that the dynamism of the Republican Party. As Gov. Mike Huckabee announces today, its slate of presidential candidates is as lively a group as one can imagine. The Party has asserted control in Congress to the point where the White House knows it no longer has free reign to destroy the nation in every imaginable way.


That’s why voters will in 2016 likely rebuke the Democratic Party in an electoral bloodbath. It’s why the voices within and beyond the Party should be calling for Hillary to step aside. It won’t happen, but it should.

Just 25% of her supporters think she's honest? Well, that number would be higher if it weren't for the internet, and yet Rasmussen says she still has massive support across America, meaning that somewhere around another 20% of the American public supporting her believe she and her husband are crooks. Both categories are dumb and delusional! Is it any wonder the Clintons – and I’m sure most politicos on both sides of the aisle - hold so many in so much contempt? It's no wonder the FCC wants to eliminate speech that contentious through new regulatory interpretations the Congress never intended for them to have. It must be really irritating when a politician and their acolytes lie and the media isn’t all on board with their clabber.

One more thing. I just opened my Rasmussen report for today and Obama has a 48% approval rate and 27% of the public thinks the nation is headed in the right direction. I would love to see these people questioned by one of those “Man on the Scene” street reporters about what they know. Things like who's the Vice President, the Speaker of the House and if there really is such a thing as socialism or was that a myth made up by the vast right wing conspiracy to make poor mistreated, unfairly attacked Bill Clinton look like a criminal just because he lied under oath, when lying under oath was still considered a crime, even a serious crime. Imagine that!