The Slow Death of Common Core 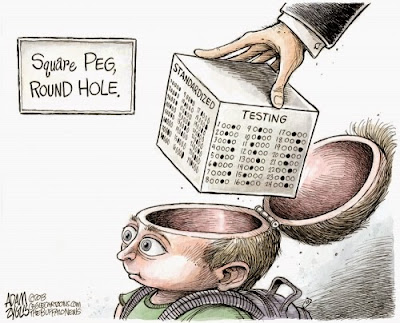 
Think about the major policy undertakings of the Obama administration over the past six and a half years. It began with a “stimulus” that wasted trillions in the quest of generating jobs, but did little to nothing in achieving that goal. That was followed by ObamaCare which most agree has been a disaster for the nation’s healthcare sector and, finally, Common Core, a one-size-fits-all testing program intended, we were told, to improve learning standards in the nation’s schools.  The only thing it has achieved is the opposition of parents, teachers unions, and entire states.


One trend of significance was noted in a commentary by Jason L. Riley in the May 6 edition of The Wall Street Journal. “The Soccer Mom Revolt Against Common Core” cited a national poll released by Fairleigh Dickinson University earlier this year that put “approval for the new standards at 17%, against 40% who disapproved and other 42% who were undecided. A breakdown by gender had Common Core support 22% for men and only 12% for women.”


Perhaps the greatest surprise among these numbers is that the nation’s largest teachers union, the National Educational Association, as Rob Bluey of the Heritage Foundation noted in February “is no longer a cheerleader for Common Core national education standards.”  In a letter to the union’s three million members, its president, Dennis Van Roekel, took Common Core to task for its failure to even provide information for implementing it in their classrooms.  The American Federation of Teachers had raised similar concerns nearly a year earlier!


Writing on September 2014, Joy Pullman, a Heartland Institute research fellow whose expertise is education held forth on the “Top Ten Things Parents Hate About Common Core.” Among them was “The senseless, infuriating math.”  “If Common Core hadn’t deformed even the most elementary of our math abilities so that simple addition now takes dots, dashes, boxes, hashmarks, and foam cubes, plus an inordinate amount of time”, you are not going to get the right answer.


Parents in growing numbers have discovered, as Pullman notes, that “when they do go to their local school boards, often all they get are disgusted looks and a bored thumb-twiddling during their two-minute public comment allowance.”  Pullman says, “The bottom line is, parents have no choice whether their kids will learn Common Core, no matter what school they put them in.”  That, obviously, is changing as state after state pulls out of the Common Core program.


In a new book by Samuel Blumenfeld and Alex Newman, “Crimes of the Educators: How Utopians are Using Government Schools to Destroy America’s Children”, Blumenfeld points to “Growing levels of illiteracy, plunging international rankings, the decline of critical-thinking skills, mushrooming decadence, mass shootings, and companies that can’t find the skilled workers they need—these have become some of the atrocious hallmarks of U.S. public schools.”


“Common Core schemers are engaged in what can only be described as consumer fraud with monumental implications for education and the future of America.”  The bottom line is that “the scheme was never field-tested before being foisted on America.”


There is no part of student’s education that Common Core does not impede or corrupt. In the area of science, Blumenfeld says “Instead of teaching children about science—real science—the standards will offer students a steady stream of controversial propaganda presented as unchallenged fact.” Regarding climate change “students will be required to learn that human activities are mostly to blame, even though this notion is disputed by countless scientists and a vast, growing body of actual scientific observational evidence.”


We shouldn’t be surprised at the backlash Common Core has received from both parents and teachers unions among others. Like the “stimulus” and ObamaCare, Common Core demonstrates a thorough lack of understanding of the values of individuality that have underwritten our nation’s free market economy, helped create a respected healthcare system, and which parents have expected the educational system to pass on to new generations.

Instead Common Core teaches collectivism—socialism—and degrades various elements of education from math to English to science.


It cannot be removed from our nation’s schools soon enough.