America at the Tipping Point 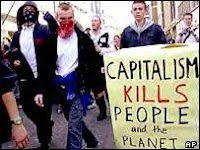 By Wednesday morning it is quite possible that the United States turns dramatically towards socialism in the conduct of its economy, its politics, and its culture. If Barack Obama is elected President a collectivist, failed system will be expanded. I anticipate a very ugly struggle to regain the gift the Founding Fathers bequeathed to us.

If John McCain can somehow squeak through to secure enough Electoral College votes it will prove very surprising. History is always about “if”, but it is mostly about that handful of men and the occasional woman like Elizabeth I who brought the full force of their personality to bear on events of their times.

I recall being surprised to learn that the Revolutionary war dragged on for seven years and to learn that it was the sheer force of personality, the unbelievable tenaciousness, endurance, and faith of George Washington that overcame the greatest military power of his time. One man can make a difference.

The power of the presidency has grown over the last two hundred and twenty years since the Constitution became effective when New Hampshire became the ninth state to ratify it. The Bill of Rights was introduced by James Madison on June 8, 1789 in the House of Representatives. It would not be until Virginia ratified the Bill of Rights on December 15, 1791 that it was incorporated as the law of the land.

America has been the single most astonishing experiment in self government by any people in the history of mankind. All power is posited in the people. In an imperial age when monarchs ruled Europe and the rest of the world was controlled by tribal leaders, warlords, and various degrees of dictatorship, Americans decided that they would be bound together by the Constitution; a nation of laws. “The powers not delegated to the United States by the Constitution, are reserved to the States respectively, or to the people.” (10th Amendment)

Even so, self-government has its perils. Aside from enemies outside our borders, there are always the ancient demons of mankind; pride, hubris, avarice, the addiction to power. Here again, it was George Washington that set the pace. After his second term, he stepped aside.

The nation has only had 43 Presidents to date. Some families, the Adam’s, the Roosevelt’s, and the Bush’s, provided two generations of Presidents. Some came to the job by route of an assassination or the passing of a President due to illness. The ones we remember best were the generation of the Revolution and those who prospered in war. Those who extended the nation from the East to the West Coast are barely remembered, but they created the map we shall watch on election night.

Here’s what we forget at our peril or, in the case of the thousands of young people inspired by Obama, they simply do not know.

The White House has not been immune to corruption. In my lifetime, there was the Watergate scandal that reached all the way to the President and included two of the highest law enforcement officers in the land, the Attorney General. Even Reagan’s administration was not immune, engaging in “Irangate” to secure funds to fight communism in Nicaragua. The Bush administration has been notorious for its secrecy, particularly as regards the billions wasted in the occupation of Iraq.

Americans expect their elected and appointed leaders to be bound by the Constitution. A respect for it is essential to the presidency. Raised on an intellectual diet of socialism, Barack Obama has long been critical of America, resentful of its long, hard road to equality for Afro-Americans, and determined to change America by challenging the role of its corporations—the great engines of its economy.

Obama will increase the taxation of its wealthy and its middle class at the worst possible time for such an action. Small business owners will suffer. Under the guise of the “environmental”, he will seek to control our use of energy, the resource that literally fuels our economy and our lives.

For all of his easy charm, the rhetoric that sounds good, but says nothing, Obama does not like America as it is. He wants “change” and, holding the reins of power, he will be able to impose change through an eager, power-besotted Congress controlled by his party. Failed programs like the Great Society will be tried again. And will fail again.

He wants to “redistribute the wealth.” That’s what they do in Europe where the native population is dying because they lacked the will to even reproduce in sufficient numbers to pass their culture and heritage to a new generation. Here in America the “greatest generation” is passing from the scene, replaced by their children and grandchildren who grew up addicted to cheap and easy credit.

It was government under the control of Democrat presidents and congresses that is responsible for the financial failure centered around the housing market because it required banks and mortgage firms to lend money to people who could not pay it back. That’s socialism, not capitalism. That’s spreading the wealth around to those who may not have had a job, nor wanted one.

Now the government has an ownership stake in some banks and insurance companies. A capitalist system would have let them fail, but we live in a semi-socialist nation that wants to take over the entire health industry and whose Social Security and Medicare programs are unsustainable.

America began to lose its soul to socialism in the Great Depression that was brought about by bad economic policies instituted by Congress. Now the federal and state governments employ millions to administer programs that earlier generations would have deemed an offense to personal responsibility, to hard work, to the American dream.

By Wednesday Barack Obama may be President-elect, although the prospect of a hotly contested election result may drag out the determination of who will lead the nation. If, however, he wins decisively, he will both demonstrate that an Afro-American can be President and, at the same time, that Americans have reached a tipping point that rejects the fundamental values of self-reliance, risk taking, and empowerment on which the nation was founded and became a super power.

Americans, at this writing, still enjoy their Constitutional freedoms. They are free to reject Barack Obama, just as they rejected all but two of the last 16 Presidents. They are free to put their “country first” and elect John McCain. If they don’t, all bets are off.
Posted by Alan Caruba at 7:27 AM