A Trip to the Mall 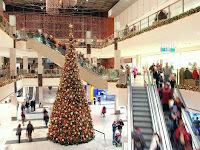 A trip to a local mall today was instructive, if not a bit enervating. What is most obvious is the astonishing amount of merchandize there is for sale; clothes, clothes, and more clothes, followed by all manner of other goods. I was there to check out flat-screen televisions. I could say I thought it was my patriotic duty to buy one, but the truth is I was looking for sales.

The really big ones are still pricey, but the smaller models are within most people’s budgets and I saw a fair number of fellow patriots checking them out.

The mall is the quintessential American invention, not unlike supermarkets. Ours is a consumer society, but a lot of people are asking if we have forgotten how to manufacture anything any more. In truth, Americans still manufacture lots of stuff.

This thing called “globalization” is just capitalism at work as corporations and others look for the most competitive, best price to get their goods made. As much as I would like to see “Made in America” on anything I purchase, I must confess it no longer matters that much to me. Perhaps the most unexpected result has been the co-dependence we now share with China.

Herbert Meyer, a former intelligence analyst during the Reagan administration, has pointed out that American business has been going through a major restructuring for a long time. “A generation ago, IBM used to make every part of their computer. Now Intel makes the chips, Microsoft makes the software, and someone else makes the modems, hard drives, monitors, etc. IBM even out-sources their call center.”

IBM, like so many U.S. corporations, has become an aggregator as opposed to a manufacturer. It creates a vast network of companies, some here in the U.S., others overseas, all of whom are dependent on the other for the ultimate success of the product. It’s a very good reason for reducing the endless regulations imposed on American businesses, large and small, to the tune of costing a trillion dollars annually. It’s a good reason for tax cuts to encourage consumers to consume.

After wasting a lot of time trying to make communism work, the Chinese have embraced capitalism. By 2020, they will be producing more cars than the U.S. They have a billion people, compared to our current three hundred million. That means a lot of Chinese are going to want to drive to work and elsewhere. Unlike the U.S., the Chinese are building and upgrading their infrastructure of highways and bridges while ours are full of potholes and bridges that occasionally collapse. Investment in our infrastructure would be good for a dozen reasons.

The urge to have the federal government “bail out” companies that have been poorly managed is strong, but it is not the way capitalism is supposed to work. On the other hand, when the U.S. Postal Service makes ready to lay off 40,000 workers, it is an example of how new technologies drive out earlier ones. It’s sad for the workers, but then we no longer get around in horse drawn carriages, and milk and ice are not delivered to one’s home by horse drawn wagons.

I needed to actually see and compare the flat-screen television sets competing for my dollar. Proof, I guess, that sometimes, you just have to go to the mall. And sometimes, while you’re there, you realize how the world has shrunk and how our American style of doing things has been embraced by the world.
Posted by Alan Caruba at 12:58 PM

One of the more striking things about the malls these last two weeks is that they are in full Christmas mode.

Thanksgiving is not yet here, but the trees, stars, lights, and all the other trappings of a Green Christmas are upon us. (And I do not mean "green" in the Goreian sense.)

History is littered with the corpses of companies that for one reason or another didn't survive. Acme Buggywhips, for one. Studebaker, DeLorean, Hudson, LaSalle, for others. The government didn't bail them out; the country survived anyway.